> Home Page > About > Celebration of Champions > Service to the Sport Award

Service to the Sport Award

This award was established in 2013 to honour those individuals who have made a significant contribution to the sport, irrespective of duration, that will have positively promoted multisport. The recipients are characterised by dedication and commitment, coupled with good character, that has led to successful achievements that have enhanced public and/or commercial interest in triathlon. The winner of the Service to the Sport award will be announced and presented on an annual basis at the TA Annual Awards Dinner.

2019 sERVICE TO THE SPORT AWARD RECIPIENTS

Bill Davoren was the architect of Australia’s most successful Olympic Games and presided over a period of extraordinary success in Australian triathlon that has never been replicated.

A personal coach to the likes of Craig Walton and Brad Kahlefeldt, it was his time as head of the Triathlon Australia High Performance program that is particularly memorable.

During this time Davoren helped change the face of triathlon in Australia, introducing a new professionalism and modernising the way athletes trained and performed.

When the Walton-coached Emma Snowsill won Australia’s first Olympic gold and Emma Moffatt a bronze at the Beijing Games in 2008, he presided over the program.

Under his directorship from 2002, Australia won multiple women’s world championship gold medals, had Commonwealth Games success and was ranked the No.1 triathlon nation in the world.

Warwick Brennan served as founding and long-serving Race Director for the iconic Nepean Triathlon, serving in that role for 35 years. He was also a competitor, representing Australia as an age grouper at ITU and Ironman world championships. He was a founding member of Panther’s Triathlon Club, a qualified Technical Official and Race Director for a variety of other local and national races.

There’s not a lot John Hickey hasn’t done, been involved in or worked on in triathlon over his long career in the sport or He has coached for over 35 years at a country, state and national level and given generously if his time in various roles.

Founder of the Gunnedah Cycling and Triathlon Club, was the only NSW coach to be awarded the coveted Blue Award for his services to the NSW All Schools.

Between 2014 -2016 John moved to Ngukurr an aboriginal community in East Arnham Land where he established the first ever All Indigenous Triathlon.

2018 SERVICE TO THE SPORT AWARD RECIPIENTS

He was triathlons biggest fan - a former motor journalist whose passion for the sport saw him watch it, promote it, back it and eventually help run it.

The late Nick Munting's contribution to the sport is as enormous as his personality - still missed by those who knew him.

Munting contributed to the development of the sport as an event and race series promoter, race director, journalist and pioneer of online triathlon event reporting.

He was also a long-serving member of Triathlon New South Wales - and former president and life member - securing key sponsorships and bringing international events and key race series to Australia.

When Munting passed away in his sleep on June 6, 2017, aged 66, the sport lost one of its greats and one of its most colourful characters.

But his initial introduction to the sport was by accident - he just happened to see a race in 1985 which was a precursor to Ironman Australia.

As National Marketing Manager for Daihatsu, Munting organised sponsorship of the national series and was involved in early moves to establish a professional triathlon series, offering marketing and administrative support to the Australian Professional Triathlete Association when it was established in 1993. When IMG became involved in Ironman Australia in 1994, Graeme Hannan appointed Munting as media manager.

While helping promote the Sport with his generous assistance to journalists, he also became a global pioneer of online triathlon reporting as part of the first live online coverage of Ironman Australia.

He became a major player with IronmanLive, providing coverage of 12 to 13 events a year.
From the 1990s, race directing increasingly became a key aspect of his contribution to the sport.
A high point of Munting career in this role  - which involved X-Tri events, biathlons, half ironmans, ironmans and Oceania titles -  was the 2006 Australian ITU Long Distance Triathlon World Championship.

In a testament to his extraordinary dedication and love for the Sport, Munting put together a bid for the World Championships, funded himself to travel to Vancouver to lobby the ITU, secured the race, and then ran it on a very limited budget.

Munting has left an extraordinary legacy to the sport of triathlon - both locally and internationally.

2017 Service to the sport award recipients

Geoff Frost was a key player in laying triathlon’s organisational foundations in Australia and played a part in establishing an international governing body for triathlon and securing the sport’s recognition as an Olympic sport.

Frost was a founding member of his club, his state in 1984, was vice president and president of the national federation and then Secretary-General of the International Federation in 1989 at Avignon, France.

He also led a working group to produce a Strategic Plan in 1987 as the template for our current national and international development, opened up our partnership with the ASC and AIS and laid the foundations of a junior development program.

Instrumental in establishing and introducing numerous races to Australia over the last few decades, he has been involved at just about every level of the sport, from competing in events, athlete management, race organisation and event management.

In 2000 Hannon was also the voluntary team manager of the first ever Australian triathlon team to compete at an Olympic Games and worked closely with the AOC. Hannon worked with WTC to instigate Ironman Malaysia, Ironman Japan and Ironman Korea.

During his time with IMG, he helped establish Ironman Australia in Forster as one if the great sporting events in the country and formulated the Half Ironman qualifying series in Australia.

2016 Service to the Sport Recipients

Delly Carr first dabbled in sports photography as a teenager, when he was temporarily unable to play sports and persuaded the sports master to allow him to take action shots of the school rugby team for the school newsletter. More than a decade later, after completing an economics degree and working in the corporate world, voluntary redundancy left Delly in a position to resume sports photography on a full time basis. At about the same time Delly was intrigued when a friend announced that he planned to compete in the 1988 Nepean Triathlon.

It seemed like a good opportunity to diversify his portfolio. But his visit to Penrith was quite fortuitous as he parked next to Triathlon Sport magazine editor Alan Mitchell, who offered to publish his photographs. By 1991 Delly was covering major triathlon events like the ITU Triathlon World Championships. While Delly Carr has photographed many sports including cricket, swimming, kayaking, soccer, canoeing, netball and beach volleyball, he has felt more a part of the ‘triathlon family’ than any other sports.

For the triathlon world, this has resulted in a rich visual record of not just finish lines and medal ceremonies, but of athletic action, motion, and emotion. Delly Carr’s commitment to the art of sport photography has resulted in many forms of recognition over the past two decades: from a 1997 IOC Best of Sport Commendation, to the Sportsshooter USA Gold Award for the Best Olympic Photograph, to the 2011 ITU Best Photo of the Year Award for ‘The Three Emmas’, and his 2015 selection as a finalist for the Australian Sports Commission Best Sports Photography Media Award. 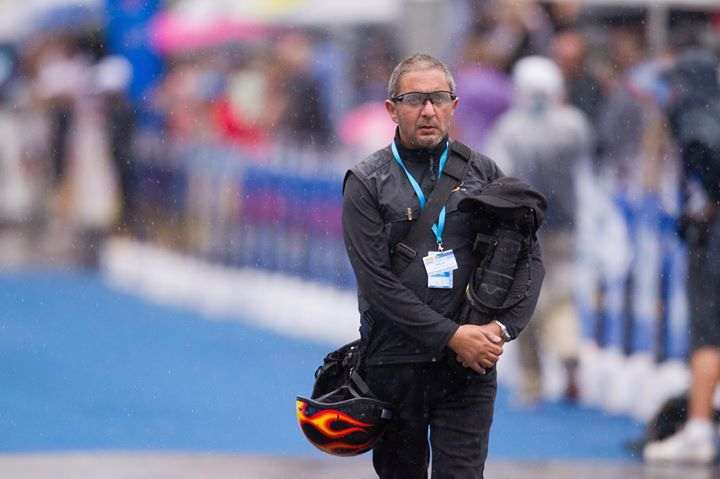 Working as a young cadet journalist in the late 1980s for News Limited, Amanda Lulham encountered an entrenched view that women did not report on sports. Taking an original approach to sports journalism, she looked at less mainstream sports such as netball, sailing and cycling. Lulham discovered many interesting sports people to report on in Sydney’s Sutherland Shire, including a passionate, colourful and very fit community of triathletes.

They photographed well, had interesting stories and were fun to interview; when she spoke with Greg Welch it was in the backyard at his parents’ home, and he was floating on a lilo in the pool. At that stage triathlon at best enjoyed a public reputation as a quirky fringe sport, and enjoyed very little mainstream media interest. The triathlon community thus welcomed Lulham. If she could not be present at key events, she had all the information needed to write about them.

In November 1990 USM founder Garth Prowd called Lulham from a phone box outside the Noosa Surf Club to tell her about Miles Stewart’s Noosa Triathlon win. She quickly became the sport’s key mainstream media reporter, helping to ensure that reports on major events and Australia’s emerging tribe of world class athletes were regularly and consistently included in News Corp papers across Australia. Lulham was thus the first mainstream print journalist to follow the sport and provided crucial public exposure for the sport from its early years. 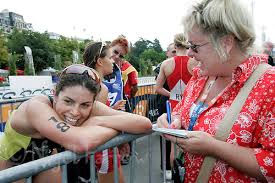 Service to the sport Award Recipients