Australia has finished second on the overall medal tally to Great Britain after a spirited day’s racing at the ITU Duathlon World Championships in Adelaide today.

The Australian team topped the medal tally with five, winning one gold, two silver and two bronze medals but it was Great Britain who won two gold and one bronze.

Other gold went to the USA, South Africa and Spain.

The Sunshine Coast’s Annelise Jefferies led the Australian charge, winning gold in the women’s under 23 division, coming back from injury earlier in the season to win her first world title. 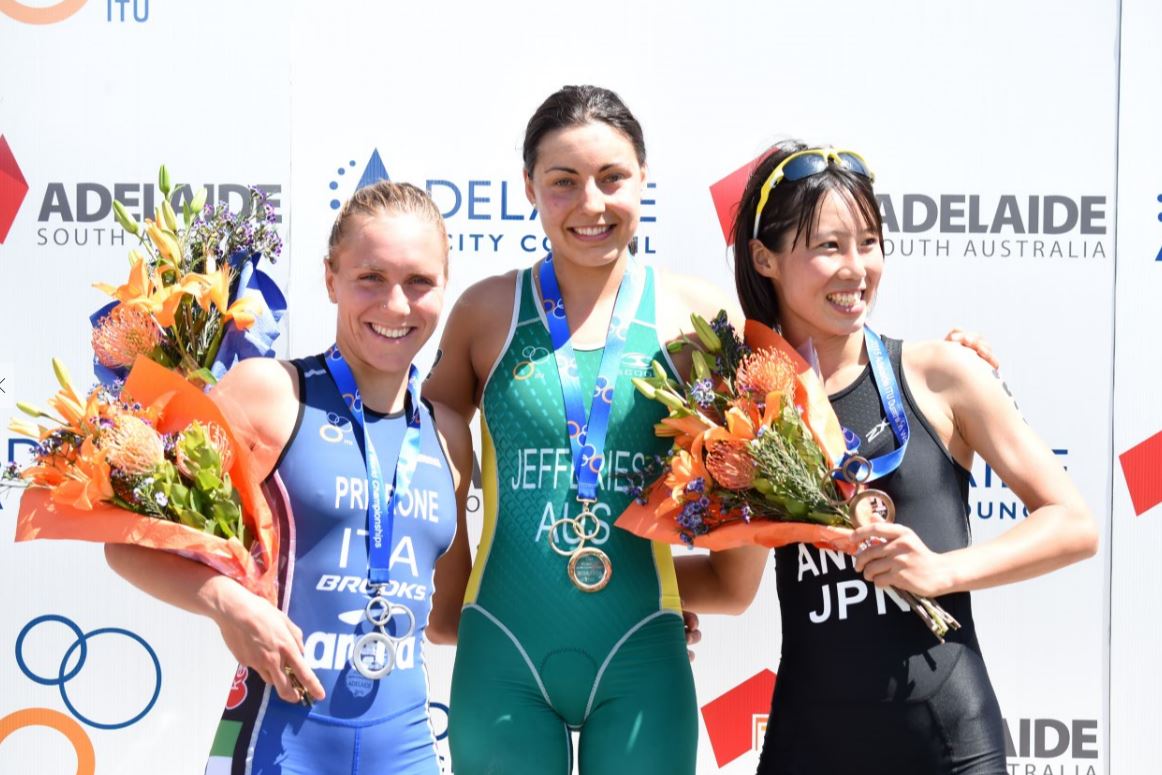 Australian pair Gillian Backhouse and Savannah Waymer finished with respective fourths in the Elite women’s and Junior women’s while Christian Wilson was also a close up fourth in the Junior men’s race to cap off a solid and promising day for the young Australian team.

Jefferies paid tribute to coach Chris Lang for getting her back into shape after she was forced to return from a European campaign with a leg injury which curtailed her preparation for the Duathlon World Championships.

“My bike is probably stronger than my run at the moment after the injury and I think I was able to burn the other girls legs a bit for the run,” said Jefferies.

“I didn’t have the year we had planned and I had to build up to this race and a big thanks to my coach Chris Lang for getting me to the line…it’s just been an amazing day.”

Jefferies and seasoned Elite women’s competitor Sarah Crowley worked together  on the bike and the run and Jefferies was able to surge past Italy’s Giorgia Priarone not only on the bike but also clocked a faster five kilometre run time.

The Australian girl was almost a minute behind after the opening 10km run, rode past her on the bike and working side-by-side with Crowley stormed home to take the gold.

And while Australia’s 2014 gold (under 23s) and silver (Elite) medallist from Ponteverde, Gillian Backhouse, missed a podium place in the Elite race, it wasn’t through lack of effort.

After finishing two minutes down on the leaders after 10km run, Backhouse rode the race of her life to capture the imagination of the crowd and she hit the front with two laps to go on the bike.

But when it came to the final 5km run Backhouse, who has had another break through year in the WTS and has the Rio Olympics squarely in her sights, had used up most of her gas.

“I just had to stick to my own pace on the opening 10km run,” said Backhouse.

“I knew those girls (Emma Pallant, Ai Ueda and Sandra Levenez) would go out hard, particularly Sandra as she’s such a quick runner and Ueda as well, they are both really fast runners, they are both 34 minute, 10km runners easily.

“I know I can’t run that fast but I had confidence in my biking ability and also from last year I was able to work into the race and knew how much more important that second run was than the first one.

“But I’m really happy, while it would have been nice to end up on the podium but I stuck to my race plan, I did everything I could do and those girls were just phenomenal on the run today.

“I have been looking forward to this race and really enjoyed it but that’s it now, my season is over and I’m really looking forward to spending time with family and having a nice break. I’m going camping with my little sister for a week.”

Australia’s 2012 world champion Felicity Sheedy-Ryan, who went into the race with a hamstring injury, put up a brave effort, but was forced out mid-way through the 40km bike leg.

“This is a great feeling with all my family around; they’ve all supported me and helped me get across the line today in third and it’s a great feeling,” said Canala, from Adelaide’s Kensington Park.

“Having my name shouted out along the course was the best part; they were out on the course everywhere and the course had a bit of everything.

“It wasn’t exactly flat and it took us around some of the iconic spots like the Adelaide Oval and the River Torrens.”