Australia’s elite ITU triathletes are back in the saddle this weekend on their road to Rio when they line up in the next round of the World Triathlon Series in Hamburg.

One of the world’s iconic triathlon venues, Hamburg is a happy hunting ground for Australians – including 2012 Olympian Emma Jackson – one of six girls lining up over the sprint distance course on Saturday.

Sunday will see the ITU Mixed Teams Relay World Championship which has seen Australia finished fourth in the last two title tilts in 2013 and 2014.

“The team will be based at least in part on performance in Saturday’s individual race but we will be looking to name our strongest possible team,” said Savage.

“It’s an excellent format, all the athletes love racing it, especially here in Hamburg where there is always a big crowd.”

Jackson has finished with the silver lining in two individual champagne finishes in the now famous “Emma, Emma, Emma” podium finishing between her namesakes Moffatt and Snowsill in 2011 and behind World No 1 Gwen Jorgensen in 2014. 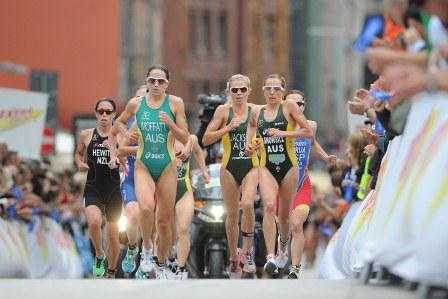 In 2015 she will be joined by 2012 Olympic bronze medallist Erin Densham, Charlotte McShane, Ashleigh Gentle, Natalie Van Coevorden and Gillian Backhouse in a field again led by the unbeaten Jorgensen.

Moffatt will sit Hamburg out, preferring to train on the Gold Coast before linking up with Jackson, Densham, McShane, Gentle and Backhouse for the Rio Test event and the first of the Olympic nomination races on August 2.

Jackson has had limited race practice this year after returning from injury and says a solid six-week training block since her WTS season debut in London last month has her back on track.

“Since arriving (at my training base) at Aix Les Bains in France I have been able to put together a solid six week block of training where I was able to finally get back to full run load for the entire time,” Jackson said.

“My goal has been to get back to that full run load and having only completed two triathlons this year it has been important to reflect race situations in training.

“I recently competed in a French Grand Prix race and had a good result there finishing second behind Gwen Jorgensen so it was good to see training heading in the right direction and my run returning after my injury.

“So my goal for Hamburg this year is to have a race where I am happy with how I executed the swim, the bike, the run and transitions.”

McShane, unlike Jackson, has had a busy season, racing in five WTS races and she sits 13th on the WTS rankings – the second highest Australian behind Moffatt who is seventh.

“I’ve done a solid block of training since the London race, with the focus in Hamburg based around the best preparation for the Rio Test Event in a couple of weeks.

“I’ve been based in Vitoria - Gasteiz in the Basque Country and it’s my sixth year here now, so it feels just like home which is nice.

“I’ve been doing a lot of climbing in the mountains around Vitoria in preparation for Rio but my major goal for Hamburg is focusing on having a great swim.”

ROYLE BACK ON THE ROAD AGAIN

The men’s Test Event will see Bailie, Royle, Birtwhistle and Fisher joined by dual Olympian Courtney Atkinson and Dan Wilson who will line up for a first round crack at Olympic nomination.

Newcastle’s Royle has had a disrupted season after battling a foot problem around the WTS rounds in Yokohama and London.

“There was no running post London and I’ve now had four weeks of uninterrupted running which I hadn’t had in a while,” Royle said.

“But training has been going well over the past month - not much racing but training hard for the Olympic Test Event in Rio and Hamburg this weekend.

“I’m really looking forward to the race in Hamburg, the crowds are amazing and it also has the World Relay which is something I really love.