Aaron Royle has given his Rio Olympic triathlon hopes a huge boost with a stirring bronze medal finish behind Britain’s Brownlee brothers in front of 100,000 people in Leeds earlier today.

The 26-year-old Newcastle-born Royle formed part of what turned out to be a successful bike breakaway that set the scene for a red-letter day as the Yorkshire city rolled out the red and the blue carpets for their two favourite sons. 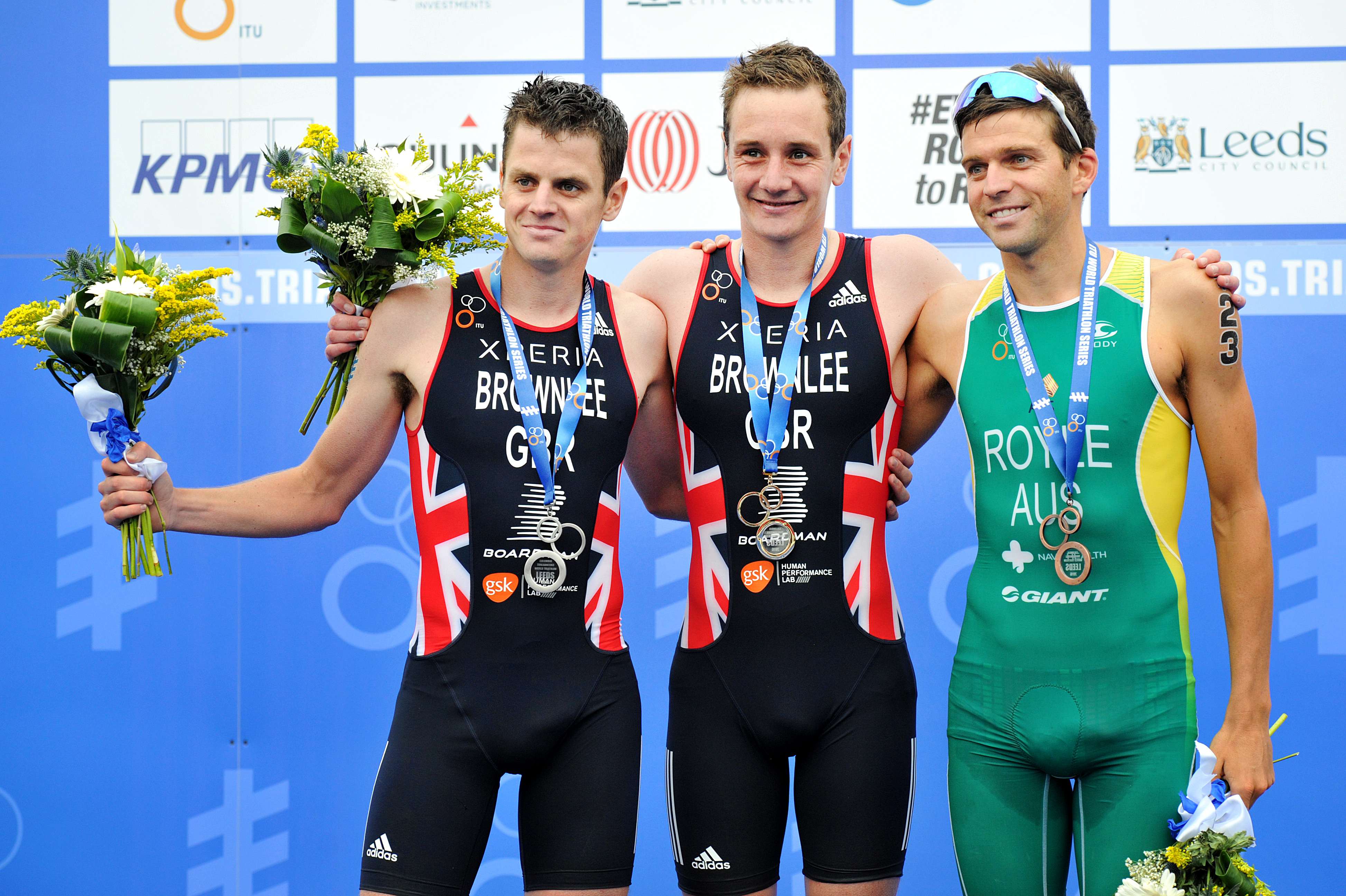 And what a way for the ITU to celebrate the World Triathlon Series debut for Leeds on the Queen’s Birthday weekend.

Defending Olympic champion Alistair Brownlee charged away with the victory, savouring a magical moment in front of his home crowd.

The 28-year-old stopped and walked across the finish line, looking around the packed finish area before hoisting the finish banner skywards  and waiting for his 26-year-old Olympic bronze-medal-winning brother Johnny who arrived for a family 1-2 finish.

And the young Aussie boy lining up for his first Olympics on August 18 wasn’t going to be left behind – he was going along for the ride – all the way to the podium.

And what a ride it was – 40km on the bike through a tough course on the streets of Leeds, packed with people who came out to cheer on two of the city’s favourite sporting sons. 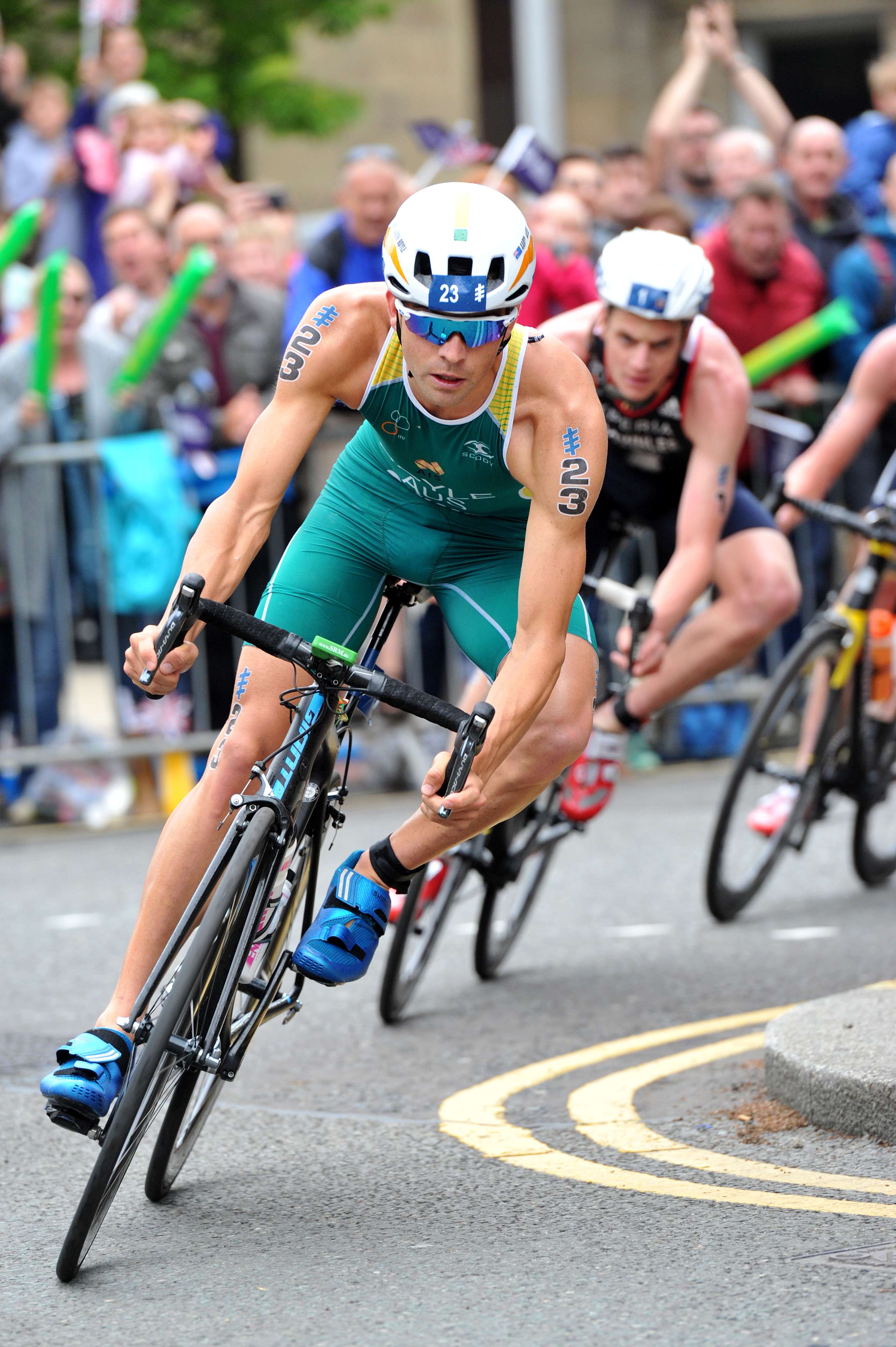 Massive posters draped down the side of buildings, British flags and faces painted with Union Jacks added to the colour to a day triathlon will not forget in a hurry.

And the Brownlee boys followed the script to a tee when they engineered the bike breakaway with Royle and Frenchman Aurelien Raphael with Alistair waiting for Johnny at one stage that added to the theatre of the day.

“Alistair saw that Jonny was a little bit behind and it was tactically a good move to wait for him and have an extra strong person on the bike; it worked out in our favour,” said Royle.

“The course was really smooth and the way we rode it we were able to put some time into the chasers and it really helped having that small group.

“With this kind of course which has the hill straight out of transition you really needed to hit it hard.”

Royle said he had never before been in a race quite like it, saying: “with the boys here, the crowd, there were times on the run when I couldn’t hear my feet hit the ground and I couldn’t hear myself breathe; what an amazing atmosphere…and building up nicely for Rio so this certainly gives me confidence coming into the final 10 weeks until the Games.”

Royle’s Rio Games team mate and training partner Ryan Bailie also produced a satisfying result, finishing 10th, despite behind “left behind” on the bike and having to ride his way through the pack before producing a 31:46 for his 10km run split – one of the fastest of the day.

In the women’s race, soon to be triple Olympian Emma Moffatt ran into 11th place, on the back of a strong swim and a solid ride in a race that saw American superstar Gwen Jorgensen run from behind to take another win.

“It’s always nice to come to a new city, a new course and a tricky course on the bike too,” said Moffatt.

“But most notable was the crowd….it was probably the best crowd I’ve ever raced in front of, that  was really special.”

Other results saw Charlotte McShane in 16th and Natalie Van Coevorden 27th in the women’s race while in the men, Jacob Birtwhistle came from a long way back in the swim to power his way through the field to finish up 24th.