BACKHOUSE BREAKS THROUGH FOR MAIDEN WORLD CUP VICTORY IN CHENGDU

BACKHOUSE BREAKS THROUGH FOR MAIDEN WORLD CUP VICTORY IN CHENGDU

Queenslander Gillian Backhouse has broken through for her first ever ITU Triathlon World Cup win with an impressive victory in Chengdu, China.

Backhouse proved too strong on the run to clear out in warm and muggy conditions to win by 29 seconds from Jessica Broderick (USA) and Claire Michel (BEL).

It was fellow Australian Tamsyn Moana-Veale who was seventh out of the swim - 10sec behind the leaders with Backhouse 16th, 24sec back and Melinda Vernon out 24th, one minute down.

It allowed Moana-Veale and Backhouse to put themselves into the lead pack of 15 followed by a second pack of six and another pack of eight including Vernon 1 min 10 behind.

With four laps remaining on the bike the Lead pack of 15 opened up a one-minute 15secs lead on the chase pack of 15 which now included Vernon. 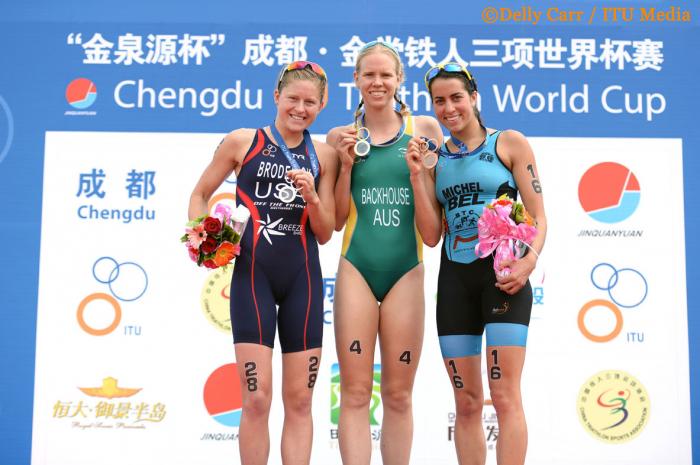 Two laps later the margin had opened up to 1:42 with Moana-Veale and Backhouse hanging tough.

Coming into T2 Backhouse was first off the bike with Moana-Veale towards the back of pack.

But it didn't take long for Moana-Veale to weave her way through transition to join Backhouse at the front of the run pack.

Coming up to 5km mark Backhouse had taken an 11 second lead over Moana-Veale and Broderick running together.

With 3km to run Backhouse had stretched her lead to 17sec over Broderick with Moana-Veale holding down third and Michel flying from the chase pack.

Backhouse had opened up an unbeatable lead one kilometre before the finish and went on to record her maiden World Cup victory by 29 seconds over Broderick and Michel who produced a big run from the chase pack.

Moana-Veale hung on bravely for fifth with Vernon 14th.

It was a first win for Backhouse and one that she was delighted with.

“In terms of career performances this is the absolute best for me by a mile. My previous best at an ITU World Cup was 15th,” said the Stephen Moss coached Brisbane girl.

“It is not a complete surprise though, training has been going really well over the past month, my coach and I were hoping for a top five but to win is just absolutely amazing.

“The conditions were pretty much perfect for us today. The smog has cleared up a bit today, when we first got here I was a bit worried but it is much, much clearer today and great for competing.”

Backhouse is back to training for now but already thinking of opportunities later in the year.

“I am back to a block of training and then a crack at the U23 Duathlon Championships and hopefully a couple of WTS starts in the not too distant future,” she said.

Michel’s run was impressive as she and Lisa Perterer (AUT) ran through from the chase group off the bike, with the Austrian finishing 4th to just miss her goal of a first ITU World Cup podium.

It was the Chinese athletes who had the crowd cheering early, dominating the swim and providing 4 of the 15 riders in the lead group, butonce on to the run the local influence waned and the class of the more experienced international athletes shone through.

In the men’s race it was Victorian Peter Kerr who was the best of the Australian contingent in sixth place followed by Jesse Featonby 12th; Drew Box 15th ; Jacob Birtwhistle 16th; Matthew Baker 36th and Matt Brown 47th.

The event will go down as a rousing success though regardless of local athletes not challenging for the medals, with a massive crowd in attendance at the purpose built triathlon venue. Estimates had over 100,000 surrounding the park in Jintang, Chengdu, some getting their first experience of international triathlon and every one of them loving it.