Australian triathlete Emma Moffatt has booked a spot on the Olympic team to Rio de Janeiro after a seventh-place finish at her hometown race at the WTS Gold Coast today.

The 2008 Beijing bronze medallist has also created history as the only female Australian triathlete to attain a third Olympic spot, and she will do so with partner Daniel Bowker who booked his ticket as part of the formidable Australian Kayak team. 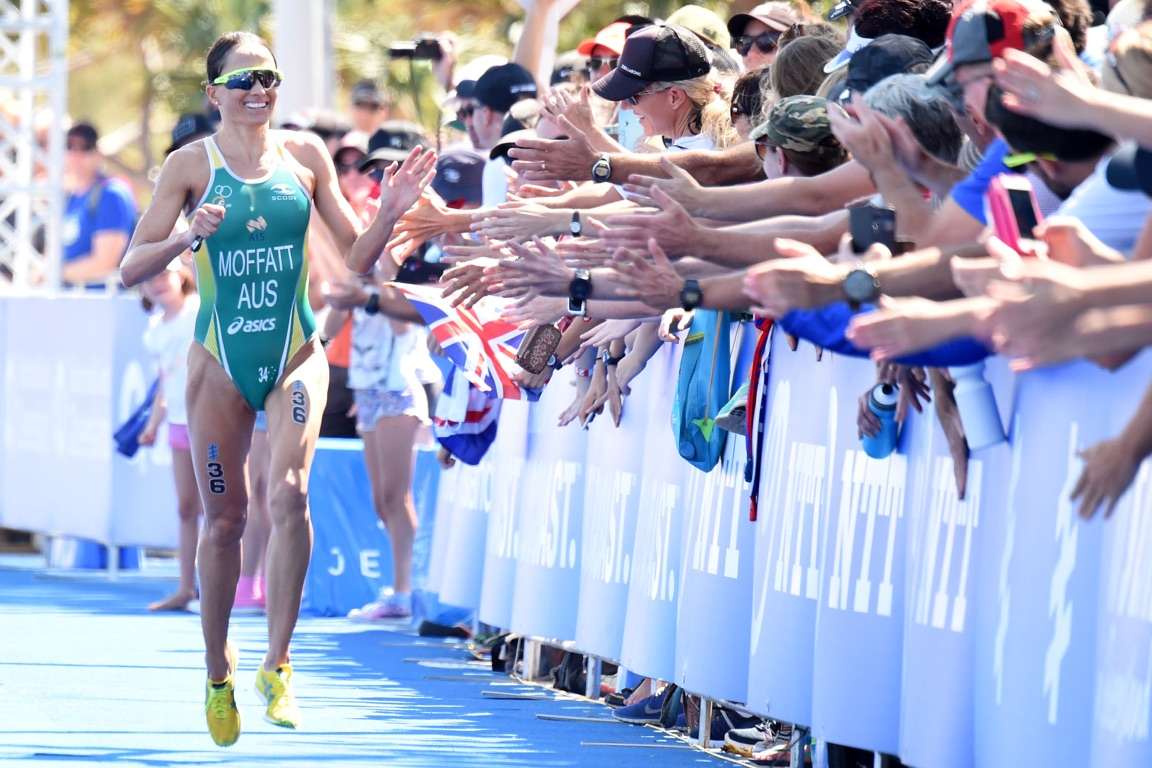 Moffatt positioned herself ideally, setting up the race from the start as she emerged from the swim in the first group, rode strongly in the front group before Helen Jenkins (GBR), Andrea Hewitt (NZL) and Flora Duffy (BER) broke away in the final laps to have over a one minute gap onto the run. It proved enough for Jenkins who not only broke Gwen Jorgensen (USA) 15 race winning streak and book her ticket to Rio. Jorgensen eventually ran herself into second while Hewitt continued her successful start to the season rounding out the podium.

Moffatt showed true grit in the stifling Gold Coast heat and admitted she had to put thoughts of Rio from her mind today.

“I tried not to think about it, I was blocking those thoughts until I crossed the line, it might take a little while to absorb it,” said Moffatt.

“My aim was to come into this race and try to get that automatic spot, to eliminate any doubt or political issue,” she said.

2012 London bronze medallist Erin Densham also put together a strong swim/bike race today to remain in contention but the effort on the bike took its toll, eventually finishing in 35th place.

Gillian Backhouse put herself in the mix early in the swim and initial laps of the bike before having to withdraw from the race as did Felicity Sheedy-Ryan.

It wasn’t the race that Gold Coaster Ashleigh Gentle had hoped for, after a slow swim she found herself the only one driving the chase group, which blew out, to a 2min 20sec deficit. They had clawed some time back when they hit T2 but was always going to be a hard task. Gentle fought to the end and managed to finish second Australian today in 15th.

“It was just really hard after such a huge build up to have a race like that,” said Gentle.

“It was just tough, I didn’t get any help whatsoever on the bike, I can say that with confidence because that’s the truth,” she said.

"That was a really hard ride mentally knowing the group was strong up ahead and motivated and obviously gaining, gaining gaining.

"Unfortunately I just faded a lot on the last two laps, I was just so tired and hot and that bike ride began to suck it out of me.

"I’m really thrilled for Moffy, third Olympics is pretty amazing for a triathlete, really happy an Aussie could put it together and one of us could get that Olympic spot.

I fought to the end riding hard with what I could, unfortunately it wasn’t enough for me to even get in the top ten, it is what it is and I’ll be racing Yokohama next," she said.

The ITU Junior World champion and 2014 Glasgow Commonwealth Games representative will line up at the WTS Yokohama race to push her position for selection.

But today it was Moffatt’s day, and while she remained vigilant of her team-mates she came here to acquit herself against the rest of the world.

“She (Erin) hid on the bike a little bit I knew her legs were going to be a bit fresh, I haven’t seen her race for a long time so didn't’ know what to expect.”

“No matter what bike pack Ash was in she was boing to be a threat, she came home strong in Abu Dhabi and I was fully aware of that.

“It is surprising those girls were amazing up front and really glad that Helen got to hold on and win.

“The rest of the team wont be announced until the middle of May so I can go home sit back have a little rest and sort out my plan for Rio,” added Moffatt.

Emma Jackson had a solid race to finish in 28th spot today. Jackson remained at the back of the chase group and produced a good run leg to put her back in the top half of the 66 strong field today.