Australia has dominated the 2015 ITU Duathlon World Championships in Adelaide today winning a total of 33 gold medals but there was no joy for triathlon legend Emma Carney.

Highlights from an amazing weekend at the 2015 ITU World Duathlon Championships in Adelaide. Thanks to all the people who made it possible and the athletes who took part. Share this video to show everyone how great our sport and our City is! Thanks Aus Sports TV for the video.Triathlon Australia World Triathlon Scody Australia The Advertiser 220 Triathlon Australia Trizone firstoffthebike.com Multisport Magazine Adelaide, South Australia

The 44-year-old, who races with a defibrillator in her chest after suffering ventricular tachycardia in 2004, was forced out of the race in the middle of the 40km bike ride.

But it wasn’t anything to do with her heart issues, she suffered a flat tyre, something that would make her cardiologist happy.

The former world champion had felt good throughout the 10km opening run, clocking a solid 37 minutes but not so good on the bike. 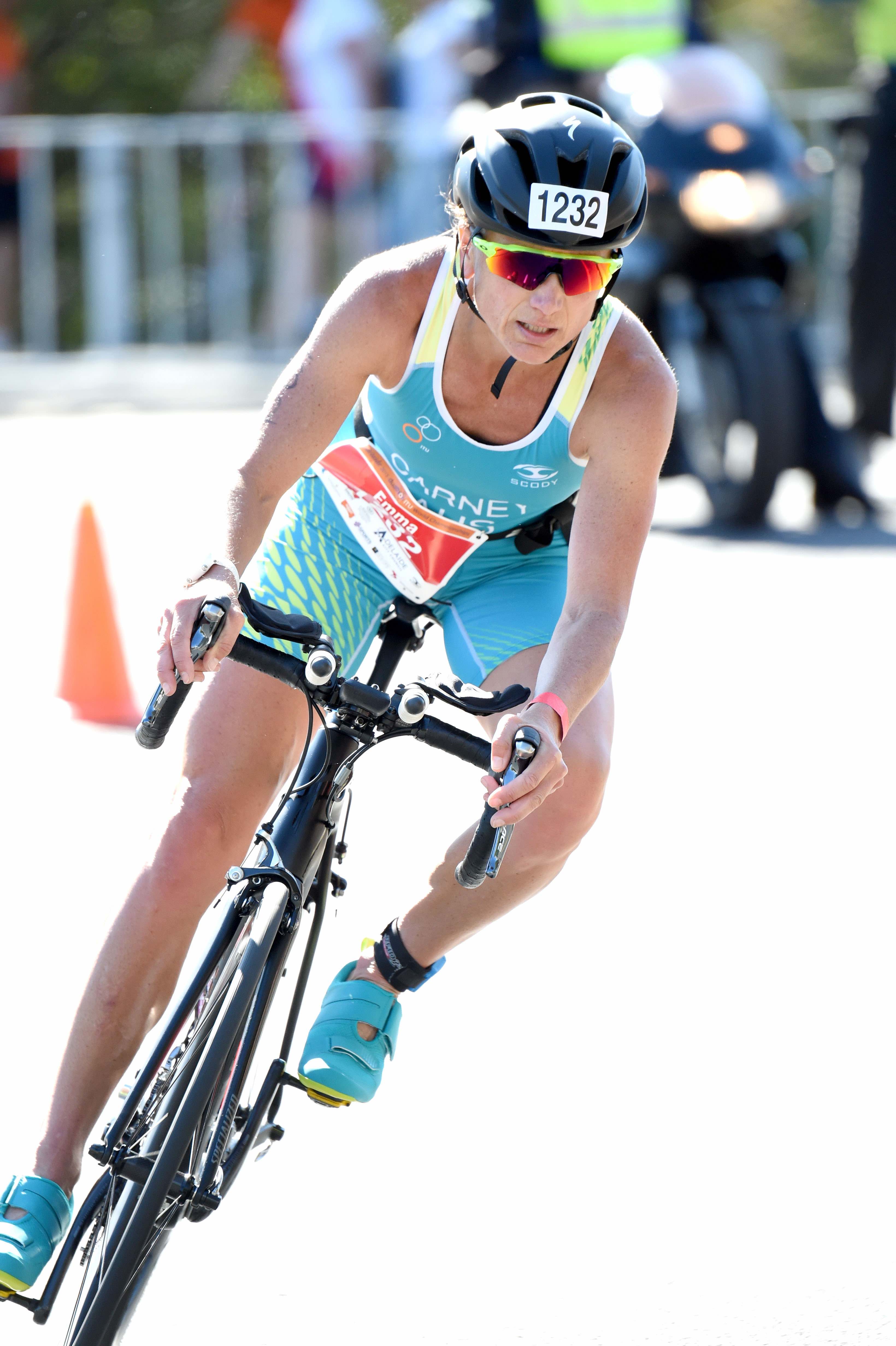 “I pulled over and sure enough flat tyre…ah well, that’s the way it goes.”

Carney, an event ambassador for the championships, remains one of the biggest names in international triathlon and was last year inducted onto the ITU Hall of Fame.

A member of the Triathlon Australian Board of Directors, Carney will be back on the bike next month when she competes in a legends team at the Noosa Triathlon.

And while it may not have been an ideal day out for Carney, it certainly was a big day out for 1500 duathletes and paraduathletes from 35 countries who conquered the sprint and standard distance events in perfect conditions.

Australia won 27 of the 53 duathlon events and six of the eight paraduathlons – for a total of 33 gold medals.

The Aussies also collected 31 silver and 29 bronze medals with Great Britain and New Zealand  (seven gold each) and the USA (six gold) the next best on a medal table that saw 13 countries win medals across the various age categories.

Amongst Australia’s golden girls was the youngest winner in 16-year-old Joanne Miller from Caboolture in Queensland and 76-year-old Hannelore Paxton from Balmoral in Sydney and WA super mum Sally Paxton who added the ITU Duathlon crown to her two ITU world paratriathlon titles. 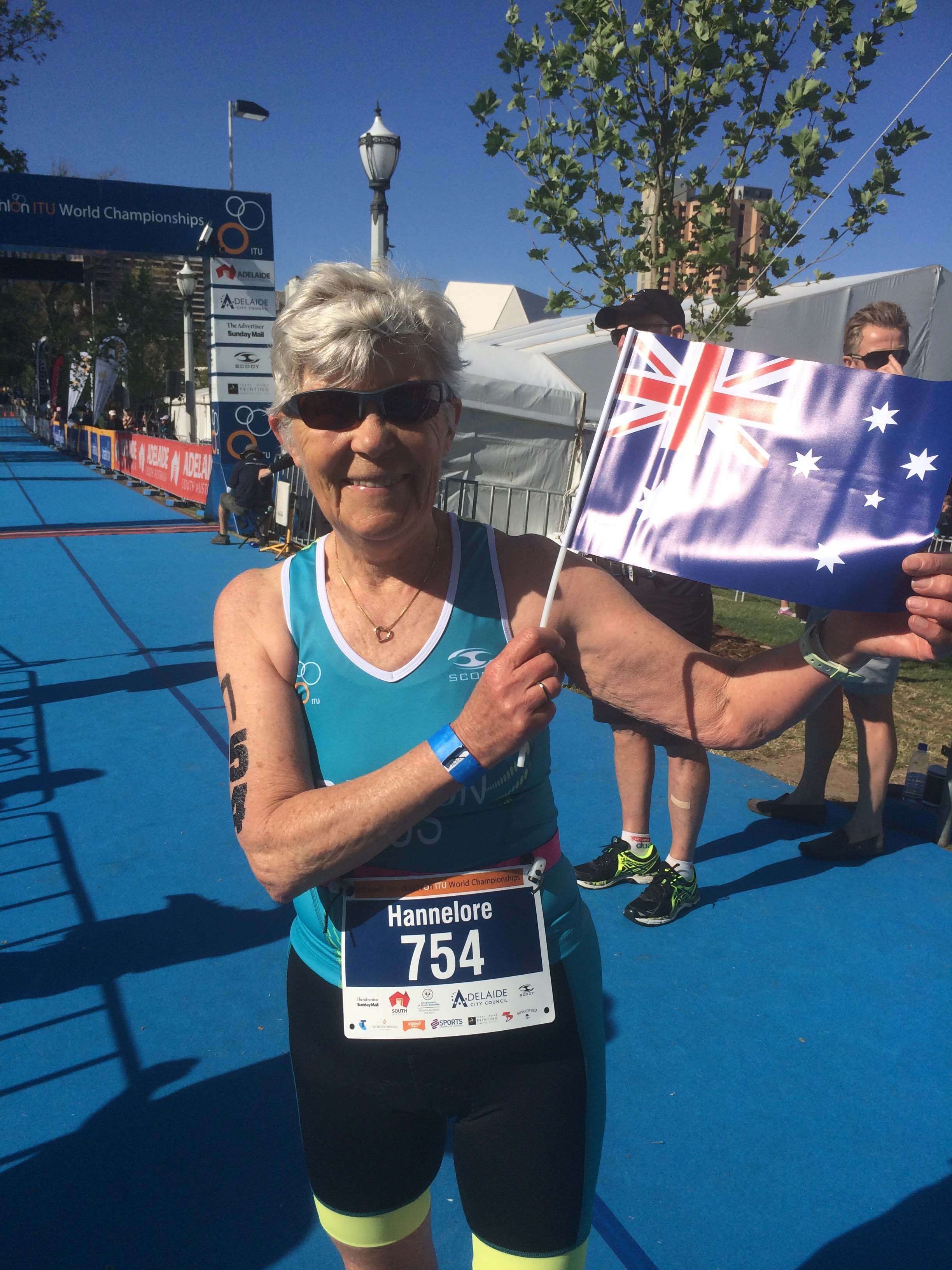 It was Miller’s first major international competition and she carved up the sprint course over a 5km run-20km bike and 2.5km run to take an all Australian odium from Brittany Yarde and Alexandra Ogden.

“It very exciting, I felt so good in the bike, that’s my strongest leg and to come away with a world championship at my first go was fantastic,” said Miller, who is coached by Chris Lang, who also mentored yesterday’s under 23 gold medallist Annelise Jefferies.

At the other end of the spectrum is Sydney’s unstoppable Hannelore Paxton, who turns 77 in three days time and won her second world duathlon crown.

And when asked whether she would be back to defend her title said quite matter-of-factly: “I might have a year off and come back the year after…I’ll see how I’m feeling.

“That’s what I have done in my career, taken 12 months off here and there, it allows me to rest (and do other things).”

But it hasn’t stopped her running Australia’s most famous fun run, The City To Surf, which she conquered again this year for a record 30th time.

There was also joy for PT3 athlete Sally Pilbeam, fresh from the gold medal defence of her paratriathlon title in Chicago, she again managed to dig deep in the hot testing conditions to again beat fast finishing fellow Australian team mate Kerryn Harvey.

The pair also went 1-2 at the ITU World Championships in Chicago, as Australia’s paratriathletes dominated the medal tally on route to the sport’s debut in the Rio Paralympics

It was also a special day for Orange (NSW) mother and daughter combination of Christine Wolfson, who won the 45-49 years standard distance duathlon world title and daughter Laura who won the 20-24 years age group.

Christine has been a regular member of the Australian teams, winning world duathlon silver and world sprint triathlon silver amongst a host of Australian titles and now daughter Laura is continuing to follow in mum’s footsteps.