Gold Coaster Ashleigh Gentle will take enormous confidence into next month’s Olympic selection race in her home city after a hard-earned silver medal winning performance in the opening World Triathlon Series round in Abu Dhabi over night.

One automatic nomination to the Australian Olympic Committee for Rio will be decided in the next WTS round on the Gold Coast on April 9 and Gentle and eighth-placed Charlotte McShane certainly put their hands up in a high-class women’s field. 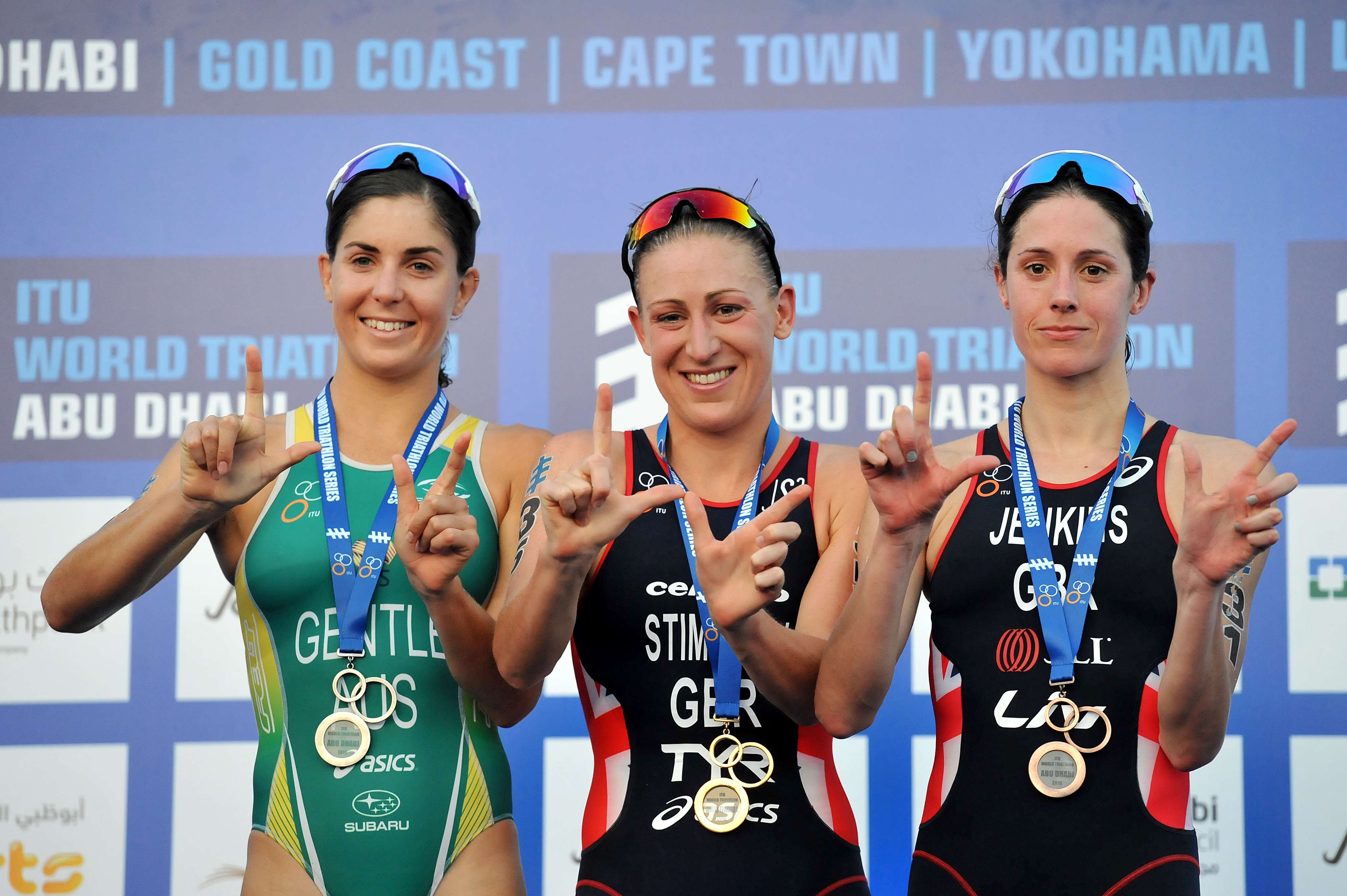 In the men, Australia’s most consistent WTS performer over the past two years, Ryan Bailie’s close-up eighth to Spain’s Mario Mola, South African Richard Murray and Portugal’s Joao Silva and young gun Ryan Fisher’s 12th were the best placed of the Australian men in encouraging performances.

But it was a day that Gentle got rewarded for putting her body and bike skills on the line in the energy sapping Abu Dhabi heat.

The 24-year-old worked with Switzerland’s London Olympic gold medallist Nicola Spirig in a chase pack on the bike that remained a steady 38 seconds behind the leaders for the first 20km on a bike leg that circled the spectacular Corniche course.

They worked solidly together to push the group forward - holding steady as the front two and not letting the pace slow, they were able to close the gap between them and the principal cyclists down to just 15 seconds with three laps to go.

But the power of Spirig and Gentle was immensely felt just before the last lap of the cycle as they accelerated to merge into the front pack and force the peloton to tally 40. 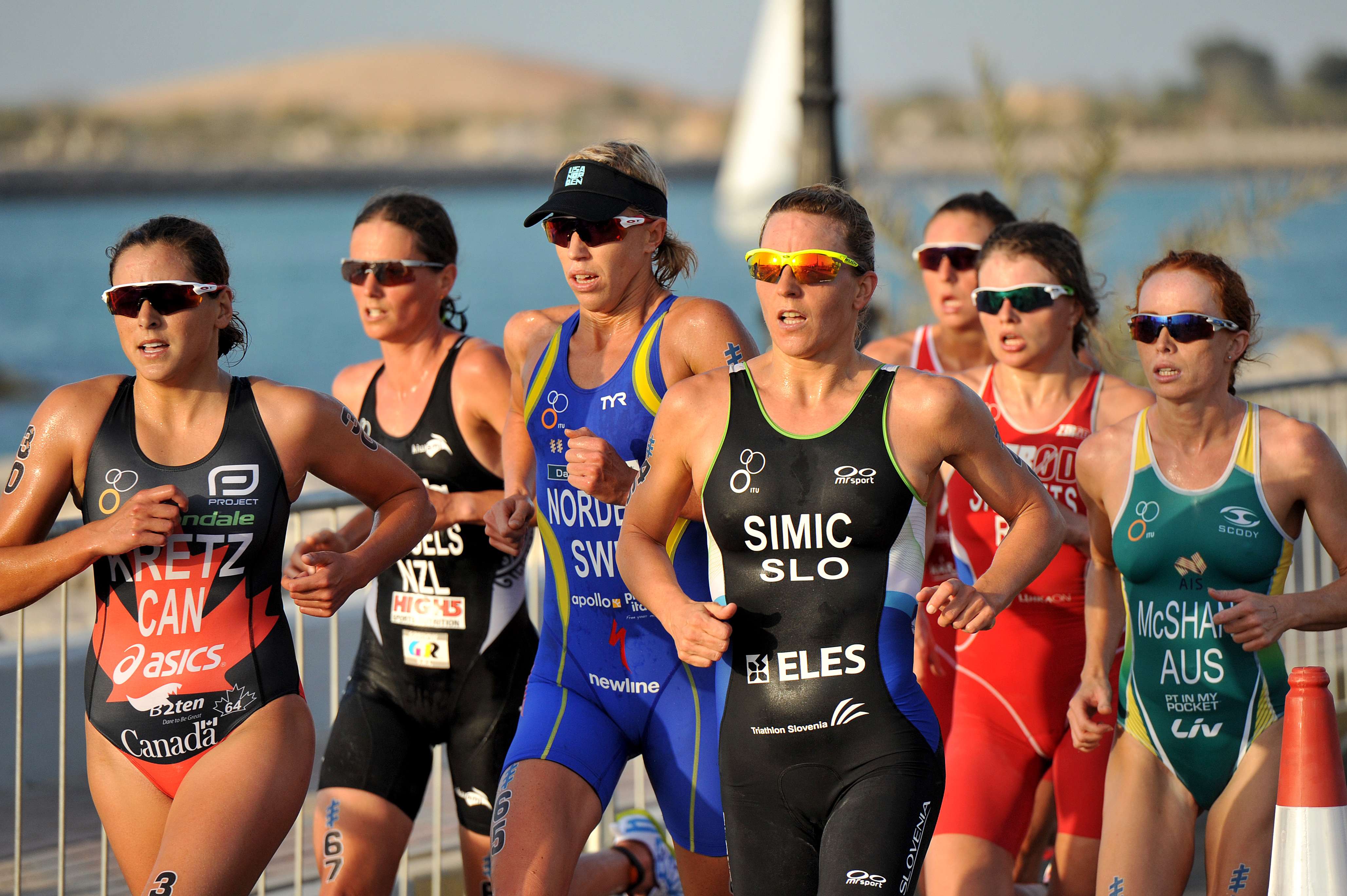 Unfortunately, mere metres before the transition zone, a crash caused a pile up and forced some athletes to lose their medal contention, including Spirig who was unable to recover and left the race after a gusty effort to continue on.

“The crash was (just) behind me….I heard it and it sounded so terrible,” said Gentle.

“You never want your competitors to hurt themselves bad or be in a crash and I just hope everyone’s alright.

“I think it was when the group was trying to rush to get to the front, the road narrowed but unfortunately that happens.”

Heading out onto the run, Flora Duffy (BER), Helen Jenkins (GBR), Jodie Stimpson (GBR) and Emmie Charayron (FRA) broke away to create some initial space after a tough bike leg.

But halfway through the 10-kilometre run, Charayron lost some distance and was replaced by a determined free-flowing Gentle, while the USA’s Renee Tomlin showcased incredible strides that put her within the top five on the day.

As the last lap approached, Duffy pulled back into fourth and the podium was left to Stimpson, Jenkins and Gentle. It wasn’t until the last kilometre that Stimpson gunned ahead of the other two to secure her place at the top of the podium.

Gentle, digging deep, surpassed Jenkins and came in just eight seconds behind Stimpson for the silver, while Jenkins held on for bronze.

Gentle said of her amazing second-place finish, “I am so thrilled. I guess that goes to show that it is not over until it is over.

“Apart from not swimming so well, I actually felt pretty good about how I raced today because it was just Nicola and I pulling the turns together (in the chase group), so I was very thankful for her there because that was a really hard bike.

“It felt really good to catch up. I knew the run was going to be so tough.”

But Gentle knew that it could well have a major reward for future Olympic selection.

“Our selection race is on the Gold Coast where we can get an automatic spot (for) the first Aussie in the top 10,” said Gentle.

“The next two (places) are discretionary and hopefully this race helps my cause, just to show (that) I’m here to race and that I race hard and I really want to do Australia proud.”

Of the other Australians, Gillian Backhouse, who was well placed out of the water and on the bike, finished 19th while Erin Densham, Emma Jackson and Natalie Van Coevorden all withdrew at varying stages of the race.

In the men’s race, it was Fisher, now being coached by former Australian coach Shaun Stephens, who was in the leading group out of the staggered two-lap swim and showed his toughness on the bike. 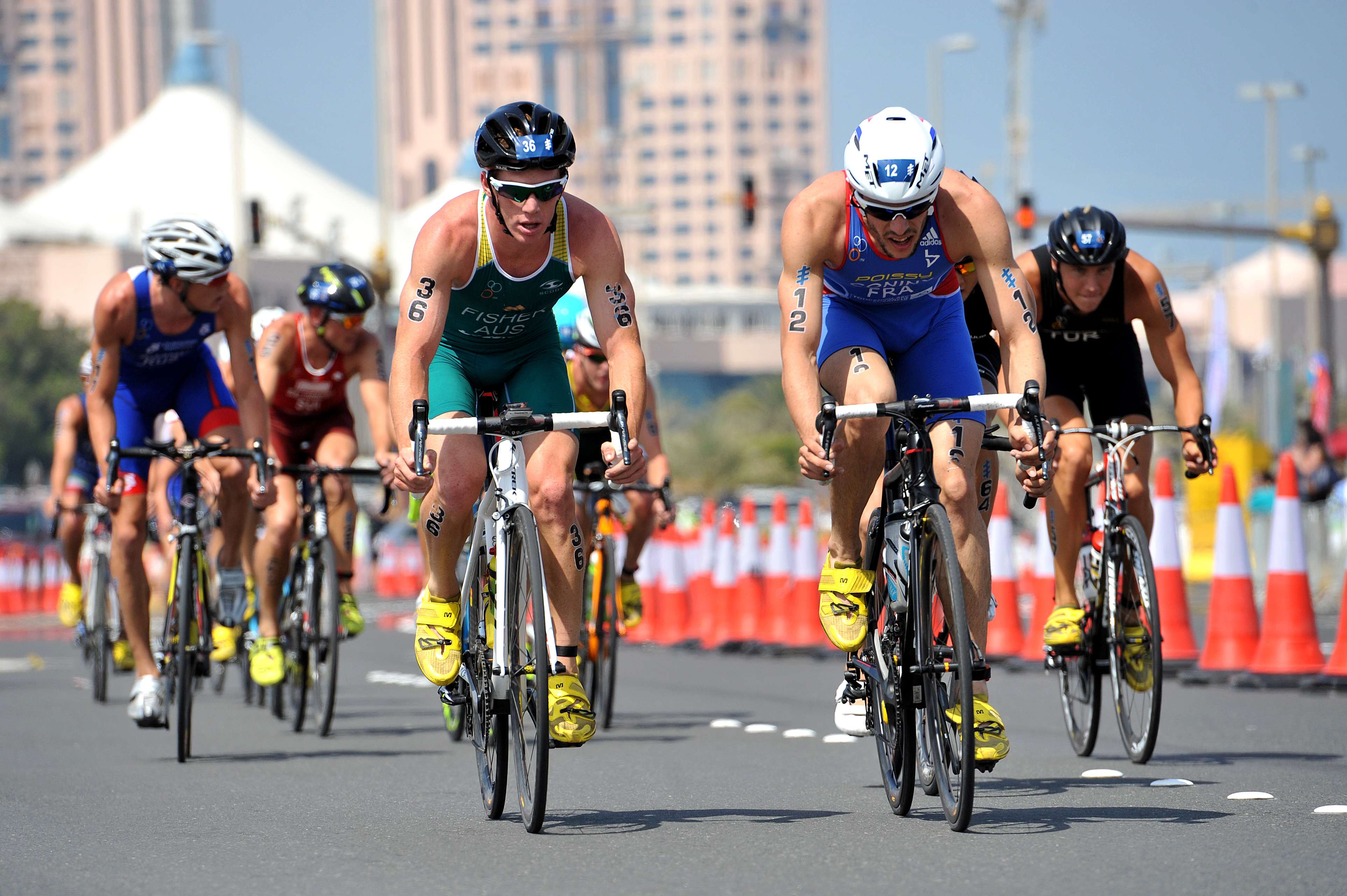 Triathlon Performance Director Bernard Savage was suitably impressed saying: “Ryan Bailie was again solid and he was there from the word go and it will be a good confidence builder for him – a good reference point.

“He remains consistent and gets rewarded for the work he does and he will be well placed come the Gold Coast race.

“As far a Ryan Fisher is concerned he swam well, rode smartly and he ran as well as I’ve ever seen him run. His relationship with Shaun is obviously working really well.”

Mola started the new World Triathlon Series season exactly where he finished, on top of the podium, as he shook off a slow swim and a penalty to win the opening race of the 2016 WTS season. 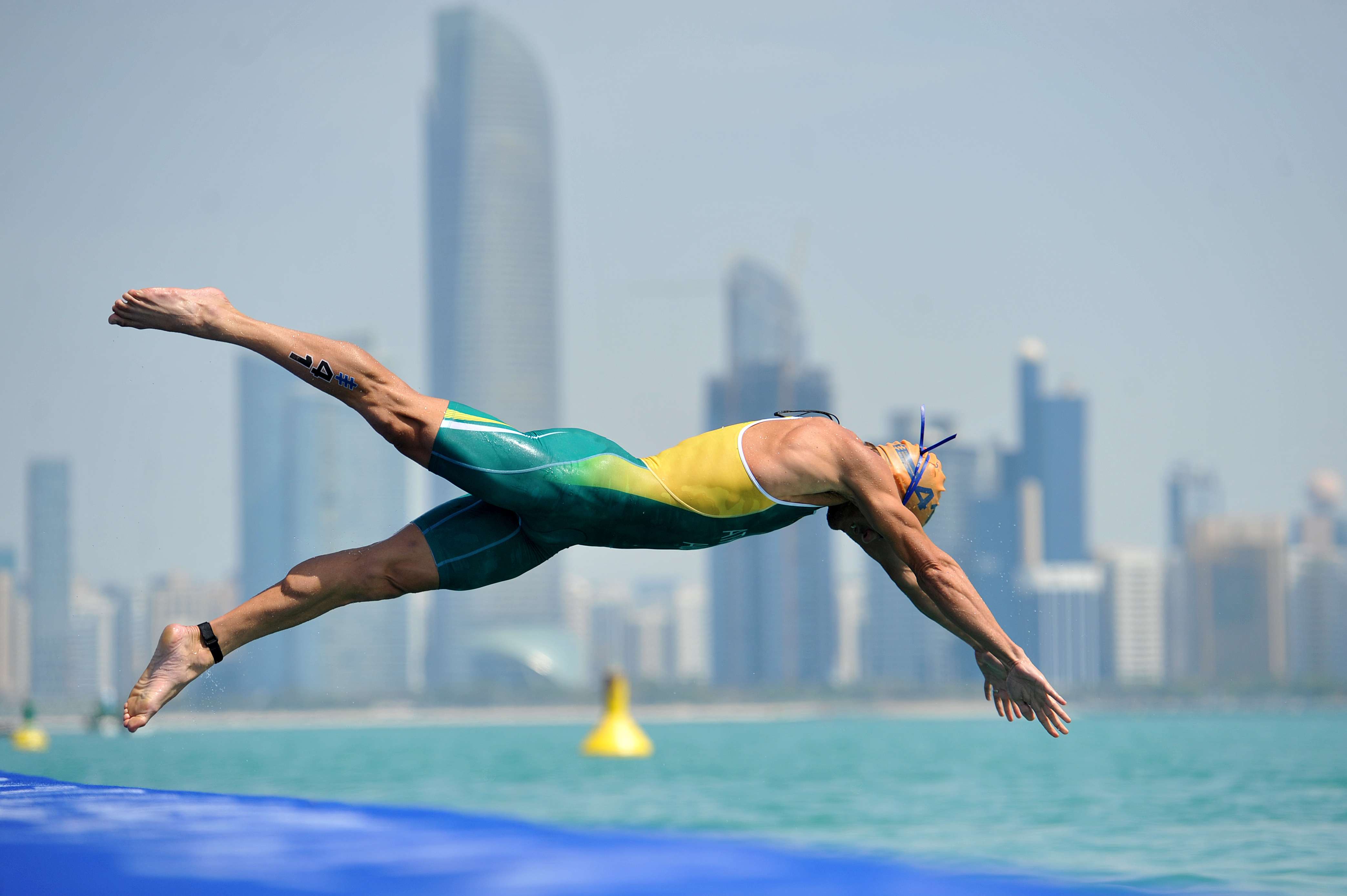 Mola exited the swim field near the end and then gained a penalty in T1 for equipment outside the box. But after a technical 40km bike brought the field together, he blasted out of T2 and hit the front in the first lap.

After extending a 10-second lead over a chase group that included Murray (RSA), Silva (POR) and Fernando Alarza (ESP), Mola made a tactical decision to take his penalty at the half-way mark of the run. That set him back on course a few metres behind that trio, but he quickly caught their heels. It then took him less than a kilometre to find his way to the front, and that’s where he stayed for the rest of the race.

While at stages it looked like Murray was in catching distance, Mola simply surged away to collect his second WTS win in Abu Dhabi, and his second win in a row after taking out the 2015 Grand Final in Chicago. Mola’s winning time was 1hour 46minutes and 39seconds, finishing ahead of training partner Murray and Silva.

“Things couldn’t have got much harder today, it’s very hot outside, of course it’s hot for everyone, but it’s makes it very tough,” Mola said.

“I didn’t swim great, but I was able to get to the front on the bike and then when they called me for the penalty, I imagined it was going to be a bad day…but when I had those 10, 15 seconds, I thought, that is the time to stop and get back into the pack again. Richard was amazing today, as was Joao and Fernando, but I felt great, and I’m happy to get the win here.”