Dr Hunt first started researching and compiling the book in 2010, conducting almost 300 interviews and gathering large quantities of old magazines, newsletters, race results and photos. “The enthusiastic response of the triathlon community to the project has been overwhelming. There are many more intriguing characters I could have spoken to or written about in the book, but I had to draw the line eventually,” she said.

She said the book captures a period in time that few remember and also documents the foundation years of the sport in Australia. Aimed at evoking memories of those foundational years the book launch featured a slideshow containing one hundred images of early athletes and events, and a display of clothing, medals and race booklets from the 1980s and 1990s along with a collectors’ edition Zipp bike loaned by Chris Langdon from Eschelon Sports. 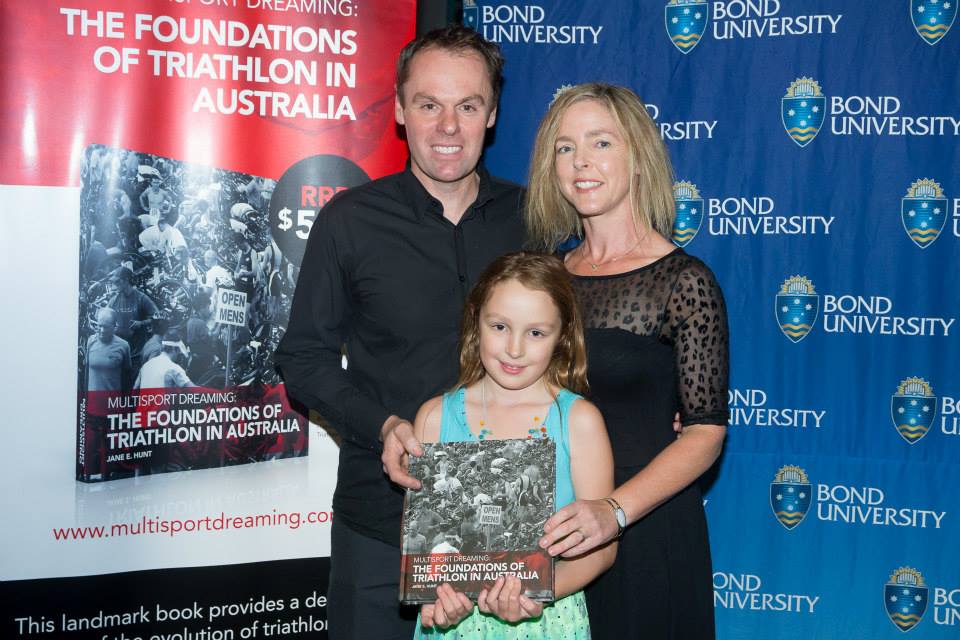 Present at the Princeton Room at Bond University were athletes who first competed in triathlons in the 1980s such as the Doyle brothers (Tony and Mark), the Southwells (Tony, Chris, John, Paul and Steve), Glenn Forbes and Tony Unicomb. Age group champions such as Fred Knudsen, Bob Telfer, Bob Southwell, and Alan Davidson also attended the event, as did pioneer Ironman specialist Jan Wanklyn, and elite athletes and Triathlon Australia Hall of Fame members Miles Stewart, Brad Beven, Jackie Fairweather and Loretta Harrop.

The launch also brought together a broad range of people who have contributed to the sport’s growth from nothing to what it is today. Pioneer race directors such as Ramon Russell, Owen Kreilis, Ian Johnson and Ken Baggs; founder of Triathlon Sports, Australia’s first triathlon magazine, Alan Mitchell; and the founding and second Presidents of Triathlon Federation of Australia (later known as Triathlon Australia), Jim Hazel and Geoff Frost, all attended. Triathlon Australia’s current President David Ferrier and CEO Anne Gripper were also present.


Following the speeches guests caught up with people they had not seen for decades, used their copy of the book to gather signatures from other guests and reminisced about the past.

For more information about the book, or to purchase a copy, visit www.multisportdreaming.com