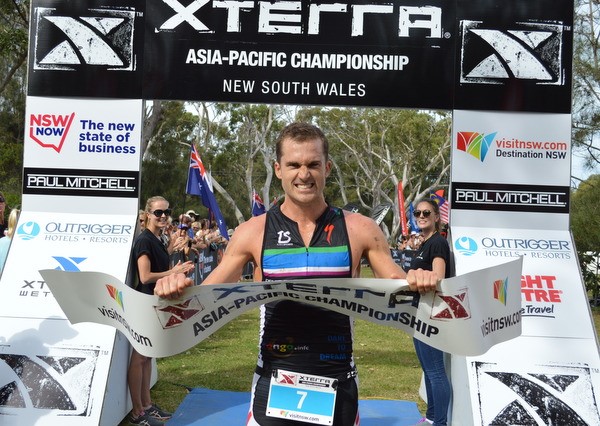 “It was a great win for Dan Hugo and perhaps his coming of age as a bona fide international superstar,” said XTERRA managing director Dave Nicholas.  “He has had 2nd-place finishes at XTERRA Worlds, wins at various places around the globe, but he broke the back of a stellar field today in Australia that marks his first big win.”

The 28-year-old from Stellenbosch, South Africa is quick to agree...“Great to win a championship, probably my first of this stature, it’s been a while coming.  I grew up knowing Australia as the pinnacle of triathlon, where are all the legends are from, so to win in my first race here is special.” said Hugo, who has now won four XTERRA majors this season.  “It’s beautiful when it all clicks, and make no mistake this course suits me down to the ground. It was super technical to ride this course quick and it had some power climbing. I loved the bike course, it was so fun, and you just don't get to see Kangaroos very often."

Everybody agreed on that point, that the course was epic, even four-time XTERRA World Champ Conrad Stoltz.

“The whole race is phenomenal and very well designed. There is a lot of really good single track and it’s well balanced.  I loved this course and was super excited to race here.  Even the run is great,” said Stoltz, who pulled out of the race at the bike-to-run transition while in 2nd place due to fatigue from a lingering cold that didn’t shake.

“I’m super disappointed I couldn’t put in a proper performance because I would love to do this race justice. It’s a big race, has a TV show, big money, just look how the Aussies crawled out of the woodwork, that’s good for the sport.  But when you’re racing at the level we’re racing at if you’re not 100%, well…”

“Biggest championship until Maui, really, and for us as professional athletes we so appreciate New South Wales for putting up the incredible pro purse, so to come out here to show gratitude and elevate the sport was super important, and to be on the top step is really special,” said Hugo.
The day started with two-time Olympian Courtney Atkinson from Australia putting a minute into the field in the water, but that lead was quickly taken away…

“Straight in, first mud hole, I got the first big crash done,” laughed Atkinson. “I thought I’d be able to hold a lead but it seems the fire tracks are as hard as the single track here.”

A group of riders with Hugo, Ben Allen, and Roger Serrano bridged the gap to Atkinson within the first few kilometers of the bike, then Hugo “chose a line through a mud section and that was it.”  He got some daylight and drove a wedge between himself and the rest of the field from there.

By the bike-to-run transition Hugo had three minutes on Serrano and Allen, and roughly six minutes to Braden Currie, Bradley Weiss, and Courtney Atkinson.  Atkinson showed off some amazing foot speed by picking off everyone in front of him but Hugo with the fastest run split of the day by far.

“When I heard I was six minutes down I didn't think I could bridge that no matter how well I ran but I heard that Benny (Allen) was two minutes up so starting thinking about winning the XTERRA Australia title and pushed,” said Atkinson, who finished three minutes, 48 seconds behind Hugo for 2nd place.

Currie, who finished 5th at XTERRA Worlds last year, stayed with Atkinson for about 8K “but just couldn’t hang in there at the end.”  Still a great effort, especially considering he competed in an adventure race in China last weekend.

Hometown hero Ben Allen held on for fifth to a rousing applause at the finish line.  Allen is beloved in this part of the world (he grew up about an hour away in Wollongong) and he put a ton of effort into hosting and pre-race promotion.

“It’s a win, even though I didn’t win,” said Allen.  “It’s so great to see the race go off so well, and the community get involved, and everybody is happy.  Jacqui and I, my family, we love the sport and the people and wanted to do our best to welcome the XTERRA Tribe to Australia.  The day came out amazing.”

Allen also made special effort to tell of how Weiss kept him moving after he passed him towards the end of the run.  “He just told me keep going and kept my spirits up.  It’s just classy to have guys like that in the sport.”

Brendan Sexton, an Aussie Olympian making his XTERRA debut, finished sixth on the day and came away with some stories for sure.

“It was an experience, definitely different from anything I’ve done before but I had a great time, it was really fun,” said Sexton, who took a spill that took some skin off his arm.  “Those boys are in a different league, so I just kind of let them go and did my own thing.  Tried to stay upright but was unsuccessful.  I got through it though. You could say I’m hooked, I definitely would like to prepare better next time but certainly enjoyed it enough to come back again.”

For the women it was another amazing performance by Bermudian Flora Duffy who finished far ahead of XTERRA World Champ Nicky Samuels and placed 9th overall.  Samuels was first woman out of the water and an equally amazing 2nd overall out of the swim.  Jacqui Slack put together three solid legs of swim/bike/run that netted her 3rd woman.  XTERRA Saipan winner Carina Wasle 4th and the “Swiss Miss” Renata Bucher 5th.

"It all came together,” said Duffy, who won the XTERRA West Championship two weeks ago and has clearly solidified herself as the woman to beat this year.  “I felt great coming into T2 after a really tough bike course and just hammered the first 2K of the run.  I just focused on my turnover because I knew Nicky is a strong runner and I wasn’t sure how far behind she was.”

Samuels was just about four minutes back at the bike-to-run transition, but coming off a cold and without the power she had hoped to put up a worthy fight.

“Having been sick for a week, to finish in 2nd is a great result,” said Samuels. “I’m not so good on the single track and this race was fast, and a bit technical through the bush and over trees.  Having been racing World Series for nine years I can’t expect to be riding a mountain bike that well, so am justly happy for the result.”

Slack was the third woman out of the swim more than two minutes back and hoping to catch Duffy and Samuels by T2 but it wasn’t in the cards.

“I couldn’t have done much better so really happy with the effort,” said Slack.  “It’s great to have such talent in the field and keeps the drive going to get faster and stronger.”

Renata Bucher had the second-best bike split of the day behind Duffy but Wasle was able to catch her on the run to take the fourth spot.

The entire field echoed the same sentiment, that New South Wales is a special place.

“This area is gorgeous,” said Duffy. “Growing up in Bermuda I’m kind of a beach snob, so it takes a lot for a beach to impress me and I can tell you it’s gorgeous here, that white sand and water is beautiful.  I really enjoyed the swim and seeing Kangaroos, it definitely felt like Australia.”

Daniel Neilson and Jessica Simpson were the top overall amateur finishers, and they (along with the fastest amateurs in each division) were named XTERRA Australia National Champs and awarded a qualifying spot into XTERRA Worlds for their efforts.

“Altogether a fabulous first XTERRA Asia-Pacific Championship race,” said Dave Nicholas.  “The location is superb, the trails got high marks for great riding and fun and the organization was excellent.  Toss in a few dozen Kangaroos, big, loud Cockatoo's flying all over, Kookabura's cooing in the woods, spicy meat pies and strong beer and you have the start of a classic event for years to come.”

As always there were stories galore, said Nicholas…Yank Craig Evans got confused on the bike; "there were two small lakes on the bike.  The first you rode around and the second you blasted straight through.  I got to the first one and slammed in then saw the side trail out of the corner of my eye and said Oh S * * T.  Next thing I knew I was totally underwater when the front wheel sank and I went over the bars.  Never unclipped and on my back in 2' of water with the bike on top of me."

There's more to a great event than just the racing.  A great pasta party the night before and a better after party at the Callala RSL. Sunny but cool weather and a race start at 11am add to the pleasure. Just a few hours south of Sydney, you really need to think about coming Down Under to see the sights and have a great race to cap it off.