Tasmanian Jake Birtwhistle has emerged as Australia’s latest triathlon young gun and today in Mooloolaba he took another step forward with a fast finishing silver medal winning performance in only his second ever ITU World Cup in Mooloolaba.

The 20-year-old, born in Launceston, who trains in Wollongong, stormed home in the final stages of the run, finishing just behind the experienced Frenchman David Hauss with Spain’s Vicentre Hernandez in third place. 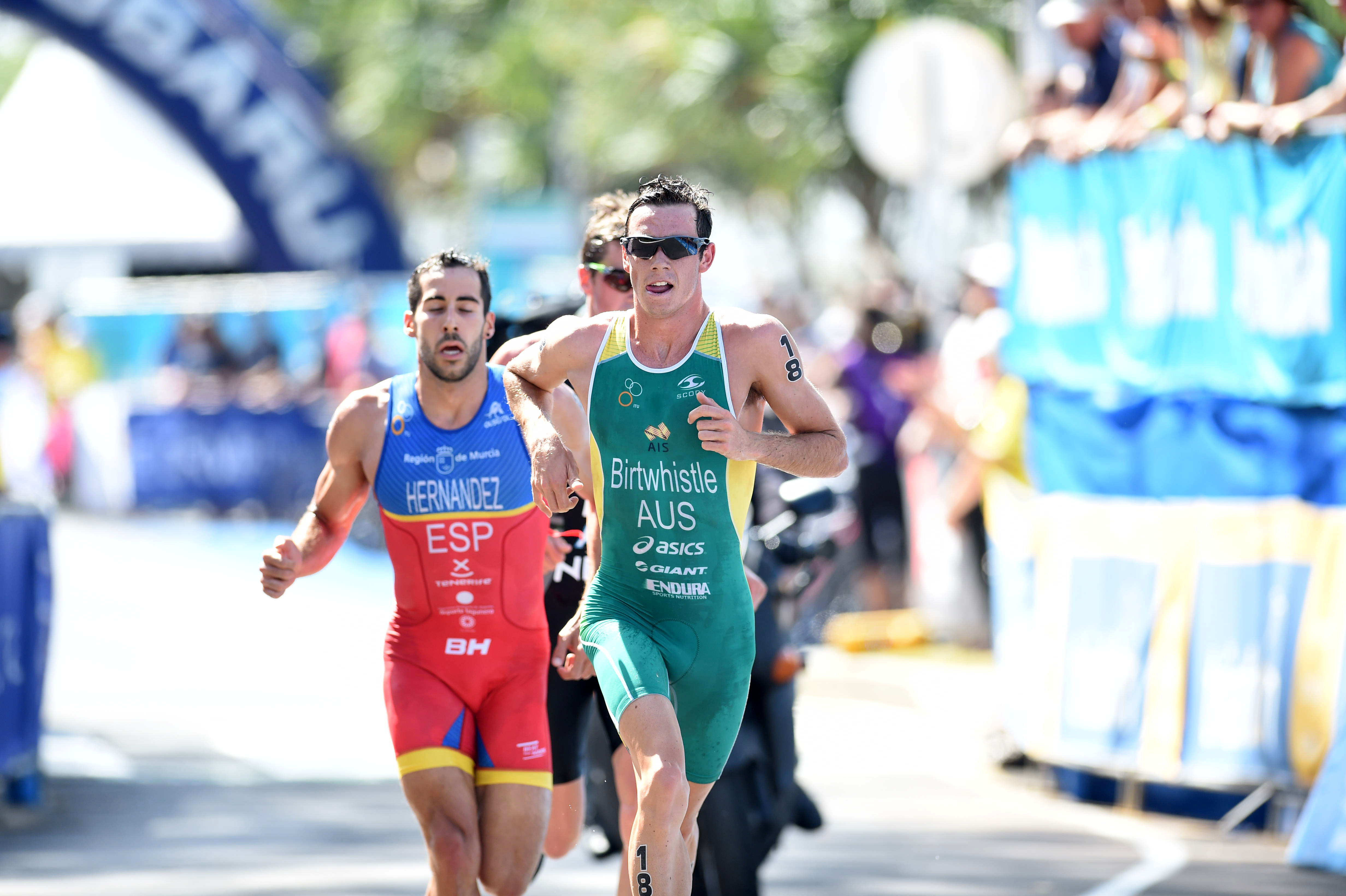 And the Gold Coast’s Ashleigh Gentle topped off a great day for the Australians with a strong finishing third in the women’s race behind Spain’s Tamara Gomez Garrido who broke through for her first major win and Wollongong-based Canadian Amelie Kretz. 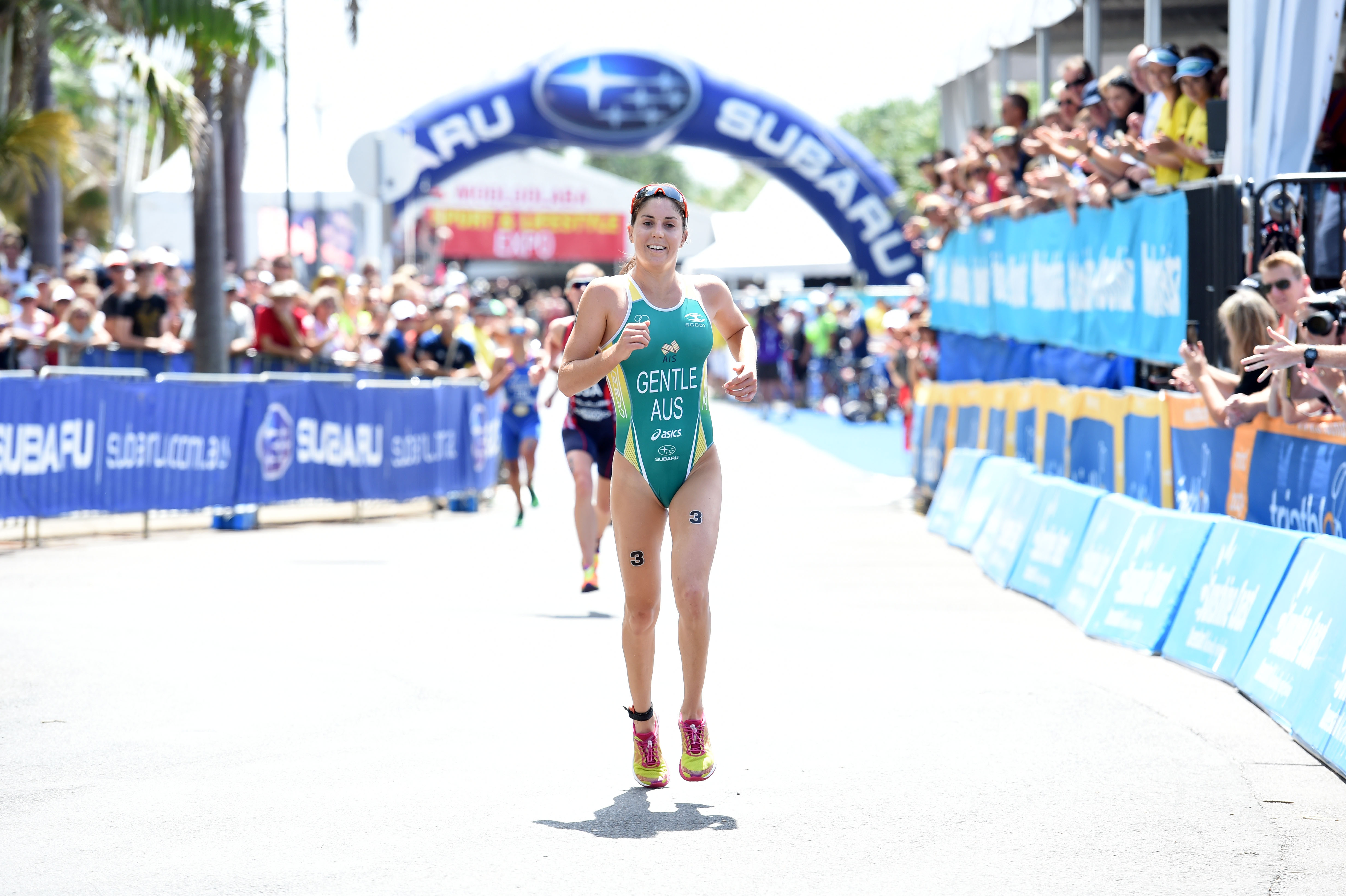 Gentle, like Birtwhistle reveled in the tricky 750m swim in and out of a 1.5m dumping Mooloolaba surf break before tackling the 20km bike and five km run over the demanding hilly course and in energy-sapping heat.

And it set up what was an ideal season start for Gentle and a continuation of what has already been an eye-catching 2015 for Birtwhistle, who has already won the Oceania and Australian Elite and Under 23 Standard (Olympic) Distance and National Sprint Championships.

The free-running Tassie boy, who has come from a track and cross country running background used all that experience to nail his first major international elite podium finish.

“I’m pretty confident with my kick, coming from my track background; I knew I would have that extra gear no matter how tired I was; I just had to keep fighting to hold off Tony Dodds (NZL) and Hernandez,” said Birtwhistle.

“I thought coming through the Expo area (a tunnel 200m from the finish) I thought I may have had a chance to come back up to David, I got close and I think I would have taken him by surprise if I’d have come past him.

“It was amazing out there, to hear your name all round the course and to see so many familiar faces and the not so familiar it was great to have that support and the recognition, it’s pretty exciting moving ahead.

“The start played a pretty big role, the long beach run into the water, I was  probably in the top 10 going around the first buoy which is a great result for me.

“I faded towards the back end and just dropped off the back of that first wave that they all got on.

“I was able to work pretty hard on the first lap of the bike and join the front group as it stood at the time, and eventually to be caught by the chase group.

“Hauss is a very experienced guy and an athlete I admire quite a lot and to finish within just a few seconds of him on the finish line is a great result.

I have my own set goals and my own plans and strategies to get the best out of myself and to come away with a win and that’s why I do this and that’s what I’m striving for.

“Second is a great result, obviously I would have liked to get the win today but in the grand scheme of things I’m pretty happy with today.

“It’s exciting moving onto Auckland (for my WTS debut) I cant wait; it’s going to be another step up again, at the end of the day it’s just a triathlon, I’ll go out and do what I train for and hopefully again I can come away with a good result.”

Meanwhile Australia’s two-time Olympian Courtney Atkinson showed he is well and truly on the way back into ITU racing with an encouraging 14th after being well placed throughout.

Gentle said she really wanted to get a good start and said: “thankfully I did and I built into the race, stayed out of trouble on the bike before the run, which started off pretty fast.”

Both Birtwhistle and Gentle will get a gauge of their season over the Standard (Olympic Distance) when they both line up in the Auckland World Triathlon Series Race in Auckland later this month.

““I couldn’t think of a better way to start my year,” said Gentle. “I knew today was going to be really fast, which it was.

“I was really happy with my swim. I was really well positioned the whole way round. I was looking up and there was only a few bodies in front of me so I was happy.

“I got in a nice little wave at the end which pushed me forward again.

“I am looking forward to the next two Olympic distance races, a tough race in Auckland then an exciting race for me personally, racing at home on the Gold Coast,” said Gentle.

“I have to say that crowd out there today was absolutely incredible; I can’t image what the Gold Coast will be like, that excites me heaps.”

“I had a pretty bad transition so I had to push pretty hard to find the gap for the win.

“After the first lap I felt the pace wasn’t really fast so I knew I had to go faster.

“Only one guy came with me so I kept pushing, believing in myself and then it was done.”

On the surf swim he said: “I come from a small French island so I am used to training in these (surf) conditions, I like it.”

“Maybe Gold Coast WTS. I will be back in training for the next month leading up to the Rio test event in August which is my focus.

“I will go to Christchurch (and train, it has been my base for the past 3 years. I also get to also spend time with my friend Laurent (Vidal).”

"I'm very happy with the race. I started the swim a little bit after the other guys, I didn't hear the horn blast very well. But I finally made it to the first group, as the bike was just one big group. Finally I start to run a little bit slower, I didn't get to the front of the race to David Hauss... but finally I finished third and I'm very happy with my performance."

On his squad (trains with Gomez, both male and female versions)

"This is a very good result for the squad and we are training very well."

She said: “The swim was not so bad in fact it was a lot of fun; but I did not feel at all well on the bike so I was happy to start the run and it was a good pace for me and that is my first major World Cup win so I am very excited.”

Amelie Kretz (Silver medallist): has been in Wollongong training with Jamie Turner and the Wollongong Wizards since January 2.

“I had a rough year last year with a stress fracture and in Quebec it is minus 30 degree so coming to Australia where it is 30 degrees it is much better to train.

“We have a really strong Canadian team. Triathlon Canada are doing really well. I don’t have a choice but to step up to my game because all of the Canadian girls are pretty strong.

“I had a good swim and a good exit. On the bike – we kept working together and on the run I just gave it my everything. Gomez got me on the last few hundred metres.”

“I am really happy, it’s a beautiful day and a great event.”

GOLD COAST TO HOST ROUND THREE OF THE WTS: The world’s best triathletes will descend on the Gold Coast (Queensland, Australia), as they take on round three of the International Triathlon Union World Triathlon Series, on Saturday 11 April 2015.