A triathlon is much more than just a swim, bike and run. It is shaking off a lifetime of being told I can't do it. It is smashing down walls of self doubt. It is hurtling past all the lies that I am too old, too fat, too slow. It isn't easy. It takes a first quavering step and months of solitary training. I am nervous about everything. My lungs burn, my legs cramp, my muscles ache, and I cry floods of tears when I cross the finish line. I am a Triathlete. 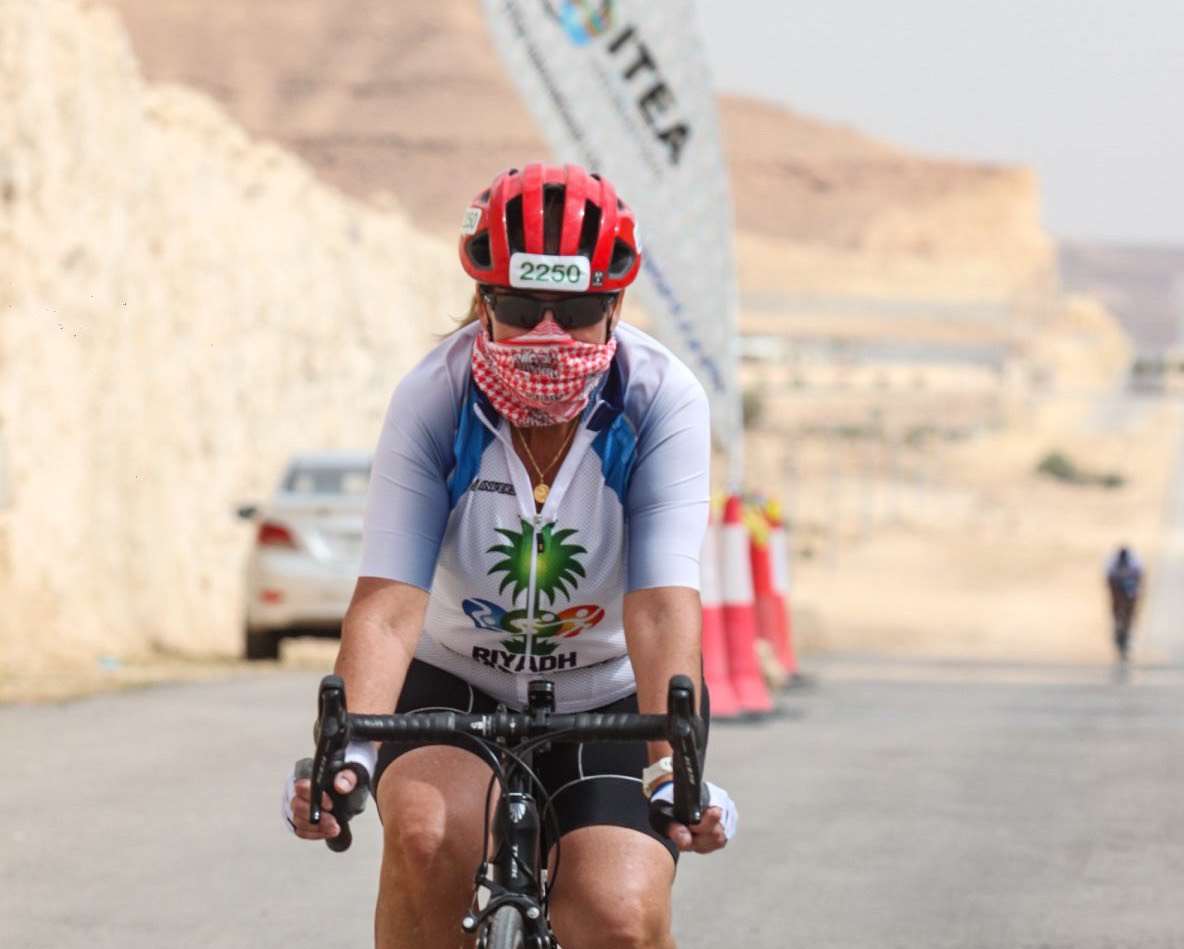 My first ever experience at a triathlon was watching my daughter participate in the Pink Triathlon on the Gold Coast in 2007.  I was a proud cheering Mum, racing around the course to watch her from every vantage point around the course, and embraced her at the finish line.

Originally from Queensland’s Sunshine Coast, I arrived in Saudi Arabia in March 2013.  Throughout my long career, I had worked in several other countries in the Middle East, but Saudi is uniquely challenging for women, and it took me some time to settle into a very restricted lifestyle.  For the first few years, I worked as the pioneering Dean of a Women’s Vocational College, and during that time I lived in a small remote beduoin town.  It was pioneering work as I was the first western women to live in that area of the desert, and this was the first time vocational training was being offered to Saudi women.  Eventually, in 2016, I moved back to Riyadh and took on the role as Director of an International Saudi school. 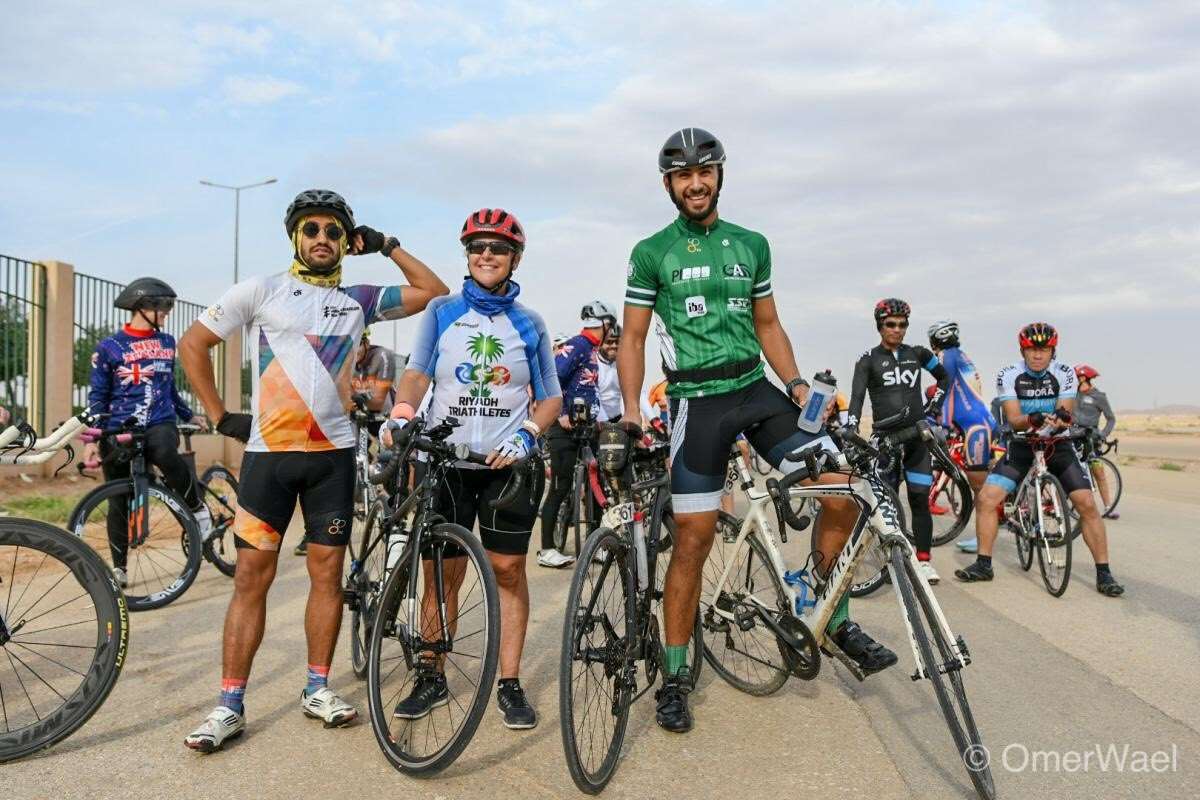 In April of 2017, a friend invited me to a small ‘underground’ triathlon event in Riyadh, Saudi Arabia, to photograph the event and to volunteer some support.  We arrived before dawn to a secure location and the event started just as the sun was rising. For the next three hours, I watched a very motely crew of amateur athletes race around a course that was marked with baking flour and and chalk.  They were a diverse group of ages, nationalities and fitness levels, but they all showed great commitment and passion as they flew past my camera.  At the end of the race, I was in complete awe and enthusiastically cheered every athlete across the line.

Caught up in the energy of it all, and on a complete spur of the moment whim, I signed up to do my first triathlon a few months later.  I borrowed a mountain bike and learnt how to ride. I started swimming for one hour a day, a couple of days a week.  Having a deadline ahead of me kept me motivated.  My fitness level slowly increased, but I was certainly not what I would consider to be a typical athlete.  I was 20 kilos overweight and a 57 year old grandmother!

My first event was a disaster.  I almost drowned in the pool and had to swim breast-stroke most of the short 400 metre distance, I barely made it up the small hill during the 20 kilometres bike ride, and then I had to walk the whole of the 2 kilometre run leg.  But, it didn’t matter.  When I crossed the finish line, I felt as if I had won an Olympic gold medal and I sobbed great gulps of tears.  I was hooked.

As soon as I finished that first race, I signed up to become a Tri member and set my sights on the next event a few weeks later.  While working full time in a demanding job, it wasn’t easy at first to put in the time, but I committed to train two hours a day.  I bought a Garmin watch, downloaded Strava and recorded my progress.  I changed my language and my priorities.  Food became fuel, and I swapped the word ‘dieting’ to ‘training’.  My energy increased and the weight started to take care of itself.

Training and competing in Saudi Arabia has its own unique challenges.  Women are not permitted to run or ride a bike in public without wearing an abaya, and I must always have a male relative escort.  At the time, women could not drive and I had limited access to transport.  It was not possible for me to train outside in the open.  As Riyadh is in the middle of desert and 1,000 kilometres from the nearest beach, finding a place to swim is tricky.  In addition, the extreme desert heat is confronting, and throughout the summer the  temperatures can reach 50 degrees celcius. To overcome the hurdles, I compete and train either early in the mornings or late at night, and rely on friends that live in western compounds, or I travel far out in the desert, to keep well away from the religious police.

Joining a Running Group inside a compound was my biggest lifestyle change.  I had never been able to run, and I used to wag school on Sports Track Days.  The first night at the Running Group, bitter tears stung my cheeks and I had to push aside all those old school feelings of failure. I hobbled around the track, came last in every exercise and puffed my way up the stair sprints.  But, instead of feeling ridiculed, I felt welcomed and included.  I listened to everyone’s stories, and was surprised to find that most of my fellow runners were also new athletes.  Despite wanting to give up many times, their stories inspired me to keep going.  Three months later, I completed my first 42 kilometre marathon as the first and only woman in my Masters category.

Just two months later, I walked into the arena at my first International World Triathlon Championship event in Abu Dhabi.  The crowd was noisy and excited, loud speakers, helicopters, and cheers, completely overwhelmed me. Tears stung my eyes and insecurity whispered into my heart. I was intimidated by the young muscly legs of elite athletes and their carbon fibre Triathlon bikes. I was a grandmother with a second-hand roadbike, and I was instantly terrified. I didn't belong here! Athletes stood with teammates, coaches or partners. I stood alone, and loneliness washed over me. No one special would be waiting for me at the finish line. Months of training and preparation suddenly evaporated and I faced a wall of doubt. I decided to turn around and run back to the shelter of my hotel room.

Just as I was near the exit gate, I saw a friend and heard my name. It was a fellow triathlete from Riyadh.  The tears fell down my face and I let myself cry. 'You can do this,' she said.  'I will see you in the water,' she shouted as she headed towards the start.

Still shaking, I looked at my Race Kit. I read my name. I did belong here. This was my place. I was not the fastest, the strongest. I didn’t feel brave. But I was here.

I plunged into the salty water and the cold took my breath away. My goggles were knocked off my face and I searched frantically to find them. I stopped. Took a breath. Fastened my goggles back over my head. I struggled to remember all the details of the Race Briefing. My strategy now was to follow everyone else. And that was all right with me.  The cheers of the crowd, and my insecurity, settled into the background. I swam. I rode. I ran. The moment I turned the last corner into the final straight down the blue carpet, I bust into tears.  I was salty, sunburnt and exhausted, and I knew it was all worth it.  I crossed the finish line, the oldest woman among 2,500 athletes from 86 nations.

My triathlon journey started just two years ago, yet in a short time, I have already achieved more than I ever thought possible.  Since that first triathlon, I have now completed dozens of triathlons, competed internationally, finished seven half marathons and one full marathon, and participated in an Ironman 70.3.

Through the insistent encouragement of a great sporting friend back in Australia, I applied, for selection to be part of the Triathlon Australia Age Group team at the World Triathlon Championships in Spain in May 2019.  Receiving the selection as an Age Group is really the pinnacle of my two year journey.

A triathlon is more than just a swim, bike and run. It’s about constantly growing as a person, learning new skills, understanding the strength of your power, reaching goals and achieving new personal bests.  Likewise, my triathlon club in Saudi Arabia, albeit an underground club, is more than just a sports club:  it is a community, a tribe, a family.

I can’t wait to be part of the green and gold tribe, represent my home on the international stage, and have some vegemite with my fellow athletes.

I will stand a very proud, but nervous, Australian, at the beginning of my race events in Spain.

And I know I will cry at the finish line.

I am a triathlete. 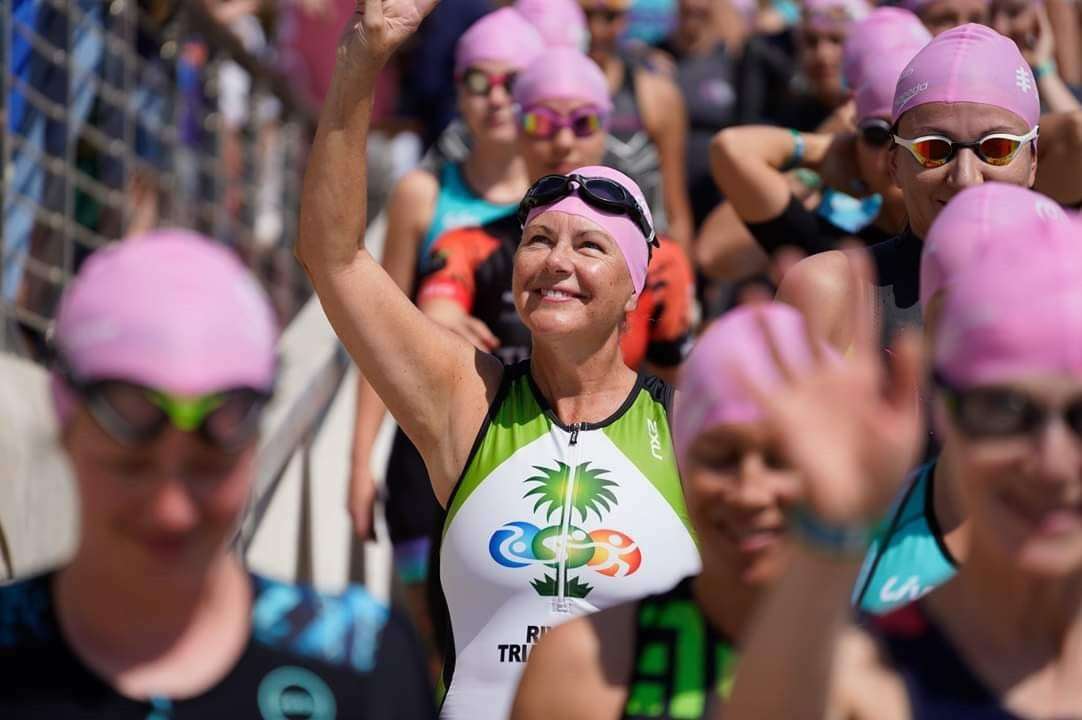 Originally from the Sunshine Coast, Kim Edwards has lived and worked in Saudi Arabia since 2013.  For the past six years, she has worked as a Vocational College Dean and Director of an International School in Riyadh.   Her expertise is pioneering education projects, teacher training and executive management in some of the world’s most remote and challenging places.  She travels extensively and has been to 97 countries championing the cause of education and community development. In addition to her professional role, she is also on the Executive Leadership team of the Australian Business Group of Saudi Arabia, and is on the Committee of Riyadh Triathletes.