At today’s SunSmart IRONMAN Western Australia Luke McKenzie etched his name in triathlon history by recording the fastest ever time for an IRONMAN on Australian soil.

The previous record of 7:57:44 was set by three time world champion Craig Alexander at IRONMAN Melbourne in 2012.

‘It’s a huge goal in the sport to go under eight hours, to have that, a 7:55 on my resume is awesome. That was a career day for me,” McKenzie said. 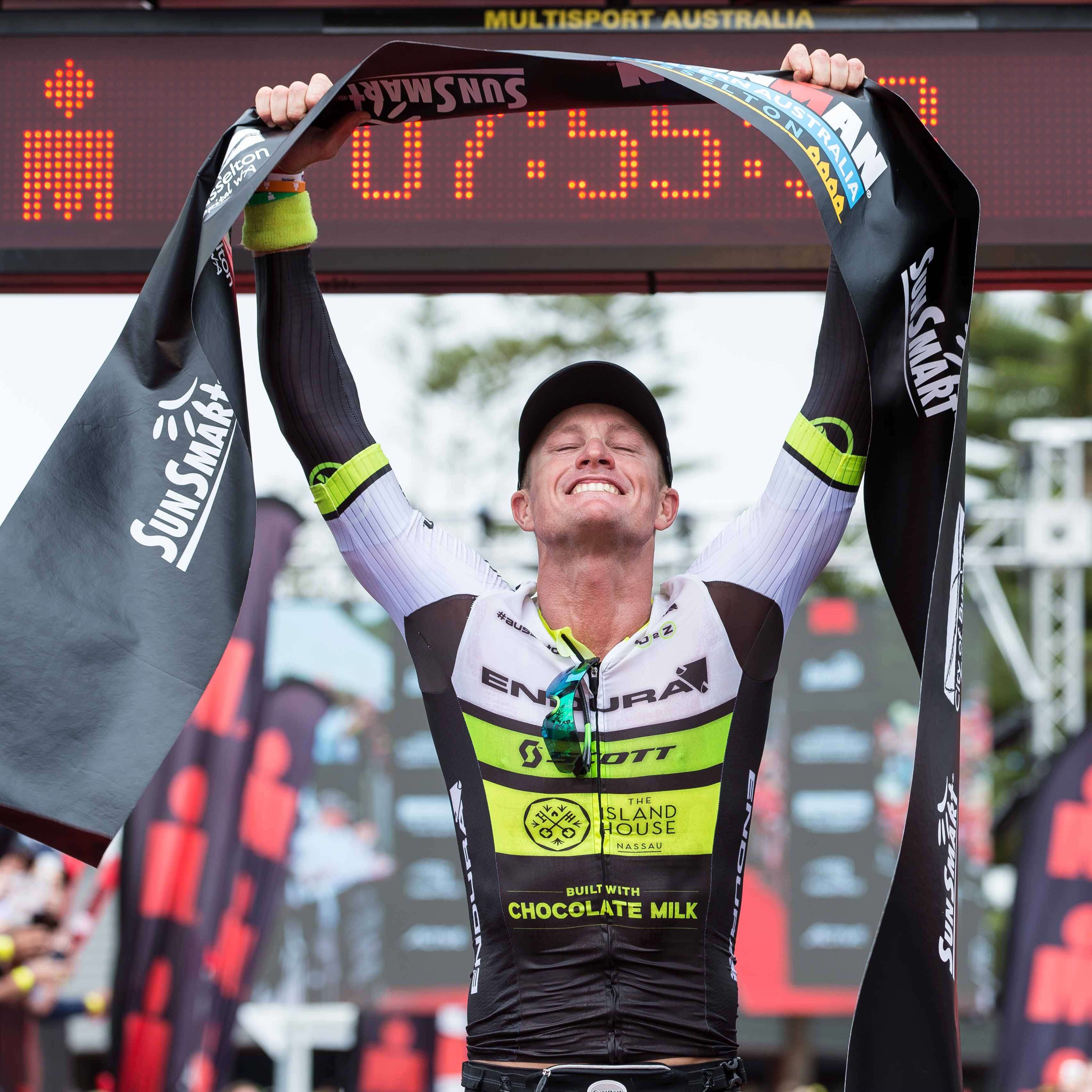 “It’s a huge goal in the sport to go under eight hours, to have that, a 7:55 on my resume is awesome. That was a career day for me,” McKenzie said.

It was also a great end to Piampiano’s year after she recorded a career best seventh at October’s IRONMAN World Championship in Kailua Kona Hawaii.

“I am ecstatic, this was a big goal for me this year to win an IRONMAN, it’s a great way to end the season. The wind today was so tough,” she said. 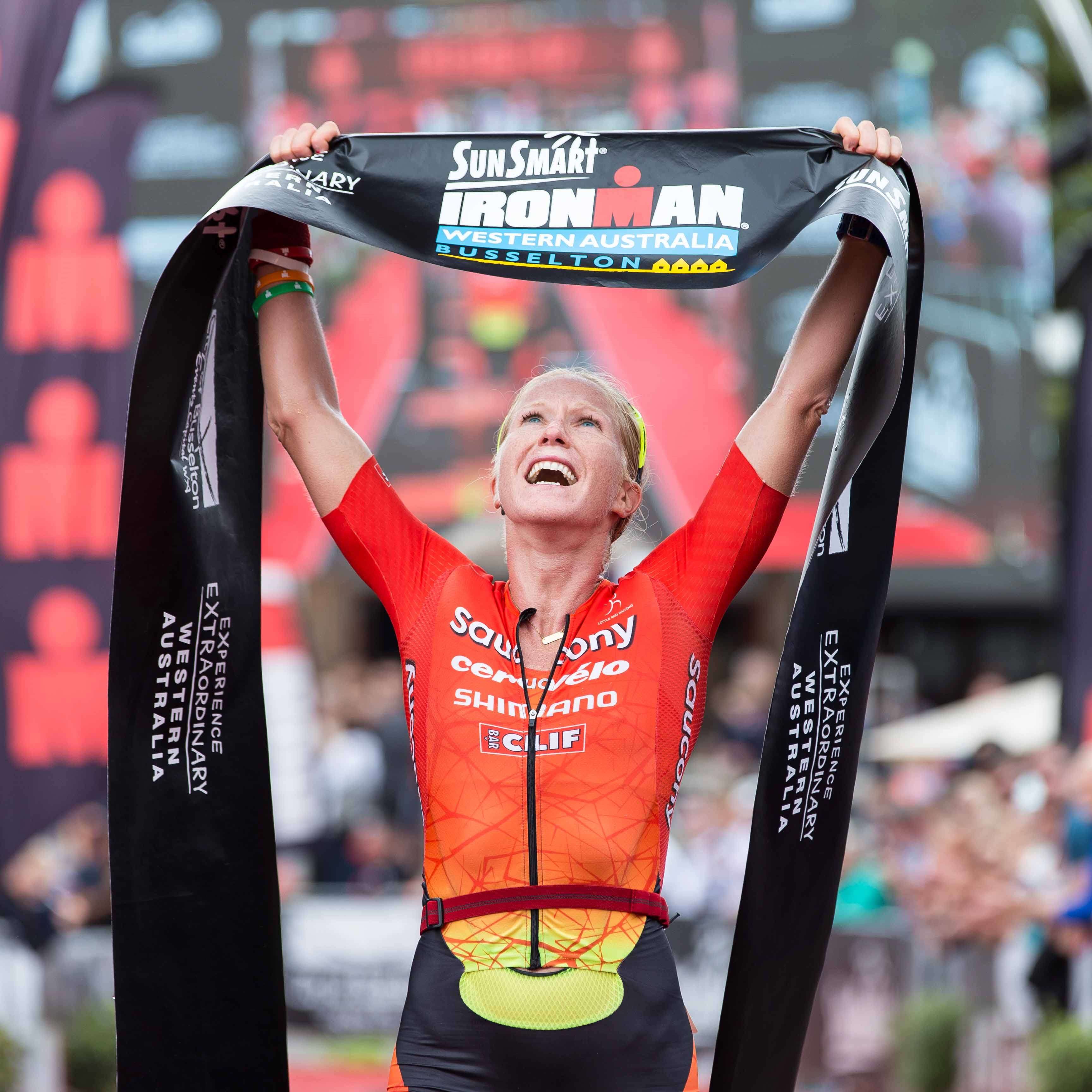 McKenzie, the 34-year-old former World Championship runner up laid waste to a top class field by recording a sensational 7:55:57 to dismantle the nine-year-old course record held by Jason Shortis and secure the honours by a massive margin of more than 20 minutes from the 2014 champion Dennis Chevrot of France.

“That’s the way I win races by going hard on the bike, I wasn’t going to wait for them I knew I was in great form. I came around the 90km and I thought I was on for a sub 4:10 bike split. It just really set me up for that run,” he said.

“I could not have done that without the crowd support literally every person on that last lap was yelling at me about the eight hours. The positive vibe just kept me going I can’t thank the crowd at Busselton enough for getting me across the line.”

German Per Bittner held off a scintillating late charge from Australian David Dellow to take third but today was all about the brilliant McKenzie, who set up victory thanks to an awe-inspiring ride of 4:08:12 which hacked almost ten minutes from the previous bike course record held by Mitchell Anderson.

The race started amid steady falling rain and it was Chevrot who set out in determined fashion to defend his title by opening up a 57-second advantage from German Christian Kramer after the opening 3.8km swim. McKenzie made a solid start and was placed a handy third some 1:46 down on the leader after the first leg.

It quickly became evident that the New South Wales-born McKenzie was a class apart on the bike. Quickly grinding through the gears he relentlessly powered away from the rest of the field at a stunning average pace of 43.51kph – more than 3kph hour quicker than his nearest rivals.

At the end of the 180km ride he had established a 17-minute lead on second place Kramer followed by Chevrot, Bittner and Aussie Tim Reed, who later quit after struggling during the run.

If the field were hoping McKenzie would fade in the marathon following his bike exertions such thought were sadly misguided as he maintained his dominance to further stamp his superiority on the field by recording the third fastest marathon time of the day in 2:52:29 on route to his majestic victory.

Behind, Chevrot swept into second during the early stages of the run from the fading Kramer, who eventually wound up sixth, and retained that placing for the remainder of the race to mount a stout defence of the title he had won 12 months earlier.

The real drama happened behind as Dellow executed an outstanding 2:46:04 marathon to haul himself from more than ten minutes down from a podium spot at the end of the bike ride to within just nine seconds of the dais. It was a brave performance from the 36-year-old Aussie, but ultimately he found Bittner, who also finished third last year, marginally better today.

In the women's race, American Sarah Piampiano reaffirmed her growing status in IRONMAN racing by clinching victory courtesy of an outstanding run to take victory by more than five minutes in 9:03:46.

Behind, Mareen Hufe of Germany took second in the race for a third successive year recording 9:09:15 with the long-time leader Yvonne Van Vlerken of the Netherlands settling for third in 9:12:06 after her race dramatically unravelled during the second half of the run.

Van Vlerken was the third pro out of the water more than three minutes behind Great Britain's Georgie Rutherford following the 3.8km swim with Piampiano and Hufe a further four minutes off the pace.

On the bike it was Van Vlerken who quickly established control at the front and held a handy lead of three minutes from Hufe following the 180km leg with Piampiano, who placed an impressive seventh in October's IRONMAN World Championships in Kona, almost six-and-a-half minutes back in third.

Yet whereas the ride had proved the critical factor in determining the outcome of the men's race it was the run which was to prove decisive in the women's pro race.

Halfway through the run it appeared Van Vlerken was set for victory as she held a lead of more than five minutes from Piampiano, who had dislodged Hufe into second. However the 35-year-old Maine-born athlete benefited by timing her run to perfection to take the race victory courtesy of an impressive run time of 3:01:18.

Hufe also passed the fading Van Vlerken in the latter stages with the Dutch athlete having to settle for third following a disappointing 3:15:50 run.