Brisbane’s Matt Roberts and Jaz Hedgeland have secured the Oceania and Australian Elite and Under 23 Titles at the 2016 OTU Sprint Triathlon Oceania Championships at the Penrith Regatta Centre today.

Roberts and Hedgeland are National Talent Academy members who both surged in the late stages of the run to secure victory. 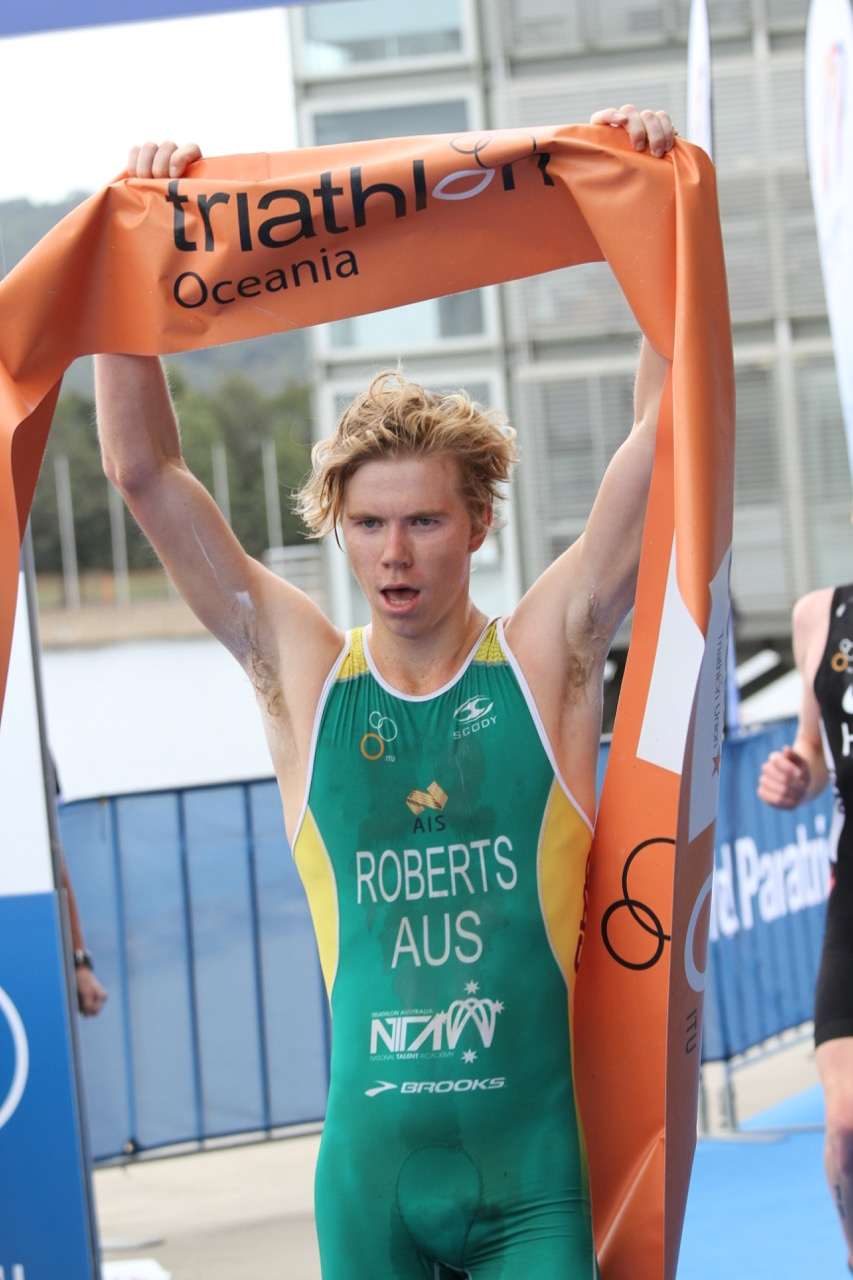 Roberts, the 2015 Australian Junior Triathlon Series Champion scooped the pool today crowned the Oceania and Australian Elite and Under 23 champion. Since switching his sporting talent from the soccer field to triathlon it has been a steady rise through the ranks for the National Triathlon Academy athlete now under the watchful guidance of QAS coach Stephen Moss.

“The titles do have a nice ring to it, I can’t say I’ve been leading up to this race very well, I’ve got another race in two weeks I’ve been training for, which is an Olympic distance so nice to have a solid race and good performance out of the way,” said Roberts.

It was a wire to wire win for Matt Roberts, he had a 20sec lead out of the swim but smartly sat up and waited on the first of four laps on the 20km bike leg.

This group was working like a well-oiled machine swapping turns and using the conditions to expand their lead after every lap. At the change over that gap had blown out to just under a minute.

“The boys were going pretty well you couldn’t really tell that wind, we were all circling pulling the turns and I think it showed when we’re out there on the run,” said Roberts.

“I think it’s tough to find a solid group of boys that will actually work together but today we all worked pretty well and once we got the flow of things it all kind of rotates and it becomes second nature to pull a turn.

Hoy was the first to hit the pavement for the 5km run but there was ten athletes closely strung out behind him, Roberts, Copeland and Jack Hickey in his comeback race.

Hoy quickly established a lead on the run with Roberts and Copeland a few seconds behind. But Hoy and Roberts stepped up the pace and made it clear it would be another battle between the pair. Roberts did not want it to come down to a sprint so made his move on the final straight to claim a swag of titles, Hoy finished just seconds behind and Copeland held his place to claim the bronze.

"I kicked just on the final straight, put my head down and gave it everything, I think I was pretty lucky to put a bit of a gap into him.

“I was just going out there I had him in my sights the whole time so gave me some perspective of what I’ve got to do and how I’m going to catch him, credit to Dan he ran a good race. I only feel 1 sec short to him last year in a Junior race, it was good to finally get one up on him,” said Roberts.

It was a great return to racing for Western Australia’s Jaz Hedgeland following surgery on her achilles last September and the move to the Gold Coast to train under Dan Atkins.

“Since then it’s been up and down, it’s been one of the hardest things I’ve had to face in my life and I’ve worked out how temperamental Achilles can be. The last couple of months have been pretty smooth and I just wanted to hold that finish banner again,” said Hedgeland.

The Australian trio of Emma Jeffcoat, Jaz Hedgeland and Danielle De Francesco emerged from the Penrith Lake and quickly set about organizing themselves into an effective formation on the bike. But it wasn't’ the ideal start or Hedgeland. 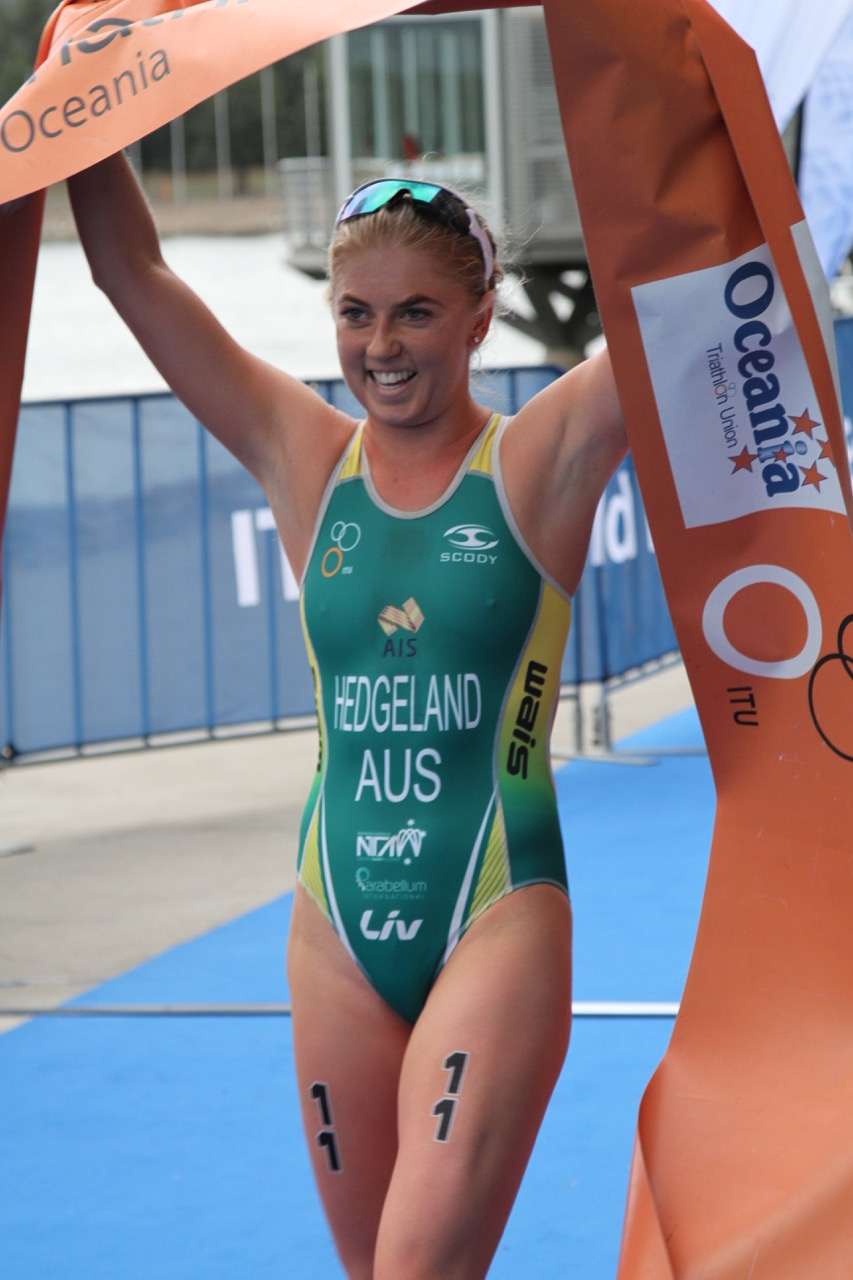 “The start of the swim and my goggles were foggy, so I actually couldn’t see where I was going I had to rely on how I warmed up and where the buoy was. Coming back I could just see bubbles in front of me and I was swimming as hard as I could to catch up to them, luckily I caught them just before we came out of the water,” she said.

The girls were increasing their lead over the next group of Sophie Malowiecki, Grace Musgrove also returning from injury and Elise Salt (NZL).

“Three of us were working really well, it was so good rolling through the whole time. We knew it was the three of us and it was like let’s go, we knew what we had to do.” said Hedgeland.

As the trio hit the run the pace from Hedgeland and Jeffcoat was too much for De Francesco but the threat would come from behind from Malowiecki.

Hedgeland also wasn’t waiting for a blue carpet sprint and took the chance with a surge on the hill, which proved a winning one.

“I got onto the run, went out with Emma and caught my breathe a bit, and then put a surge in over the hill and went as hard as I could for a little while just to get that gap and tried to hold on till the end.

Jeffcoat the Australian Under 23 Standard distance champion just fell short of making it the double but nevertheless please with her effort.

“I was really pleased I had Danni to work with in the swim, so I knew that we were going to push the pace.

“Having Jazz there on the bike with Danni, three strong riders we took even turns and worked well together, that made of a good day out.

“I was able to stick with Jazz on the first lap of the run, but didn't’ have it when she hit that surge so a lesson learned. I was really happy with that today,” said Jeffcoat.