Australia is one major step closer to being a safer place for bike riders following a Senate committee recommendation to amend the Australian Model Road Rules to enshrine a metre matters into law.

The Federal Rural and Regional Affairs and Transport References Committee interim report into aspects of road safety in Australia is recommending that the Australian road rules be amended:

“This news is the culmination of ten years work by all those who want to make Australia a safer place for bike riders,” Ms Dunn said.

“Minimum overtaking distances are now law in South Australia and Queensland, two-year trials are well underway in New South Wales and the ACT, and Tasmania now has a version of these laws.”

“This recommendation supports our push for the remaining states and territories to take action, without further delay,” Ms Dunn said

Only Victoria, Western Australia and the Northern Territory remain as Australian jurisdictions yet to commit to making bike riding safer through the introduction of minimum overtaking distance laws.

And while Tasmania has laws that allow for motorists to cross double lines when safe to overtake a bike rider, the Amy Gillett Foundation is pushing for Tasmania to also make a metre matters laws mandatory.

“The Amy Gillett Foundation presented to a Victorian Parliamentary Inquiry considering a metre matters laws this week, and there is no doubt there’s momentum for change.”

“We understand there are still motoring and cycling groups who oppose a metre matters laws or want exemptions, however the recommendation is clear - mandate a safe passing distance for drivers overtaking cyclists of one metre where the speed limit is 60 kilometers per hour or lower and 1.5 metres where the speed limit is higher. It should be adopted Australia wide with no exceptions,” Ms Dunn said.

The Interim Report also includes a recommendation regarding better data on road trauma statistics, proposing the Commonwealth Government commit $150,000 for three years from 2016-17 to fund the continued operation of the Australian Trauma Registry, and that the Australian Design Rules be amended to require all new vehicles be fitted with automatic emergency braking technology (AEB) from 1 July 2017.

In addition, the committee also recommends that the Australian curriculum includes road awareness training for both primary and secondary school students.

“We welcome all three recommendations. New technology can be used to help protect Australia’s vulnerable road users, the collection of data is crucial to evidence based decision making, and since the inception of the Amy Gillett Foundation ten years ago, education has been at the core of our philosophy and approach.  We continue to run education programs in Australian schools, which we fund ourselves, with no on-going Government assistance and to push for cycling awareness to be included in learner driver training and testing programs,” Ms Dunn said.

“Education goes beyond the schools, and we are seeing good results from driver education and awareness programs in Queensland, South Australia and Tasmania.” 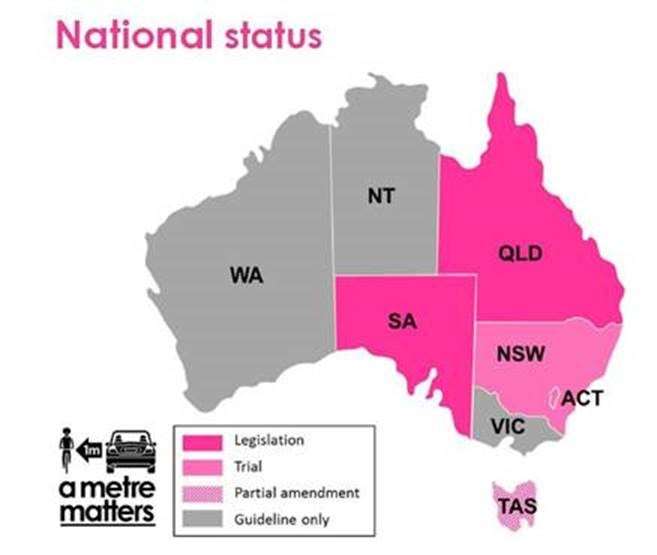