Australia has the strongest group of athletes in the world in the PT1 class with 5 time World Champion Bill Chaffey (pictured) dominating men’s racing and newcomer Emily Tapp, silver medallist in the 2015 World Championships.  Supporting Bill and Emily are Scott Crowley and Nic Beveridge who are contesting for the second potential Rio slot and junior racer Sara Tait.

Australia’s six paratriathletes racing in Yokohama WPE on Saturday morning are all preparing for Rio.  Three of the athletes, world champion Bill Chaffey (PT1), bronze medallist from worlds Kate Doughty (PT4) and Brant Garvey (PT2) met the automatic nomination clause for Rio at the Penrith WPE last month.  Their focus is now very much on preparing to podium in Rio and the race at Yamashita Park provides a venue with some similarities to the Rio course to test their tactics, technical skills and equipment choices leading into the September Paralympic Games.

The other three athletes Scott Crowley (PT1), Jack Swift (PT4) and Joshua Kassulke (PT4) are still seeking qualification, and this WPE provides not only the chance to improve their position on the Rio Paralympic Qualification Ranking List but also to take down some of their nearest international rivals for the remaining places on the start line.

Bill Chaffey (coach Stephen Moss/Shaun D’Auria) and Scott Crowley (coach Grant Melzer) face their strongest opposition for the podium position from Fernando Aranha (BRA) who is currently 3rd on the Paralympic Qualification List and recently finished 2nd at the CAMTRI American Championships. Junpei Kimura (JAP) won the Asian Championships 2 weeks ago and is currently 6th on the List and Alexandre Paviza (FRA) who finished 2nd at this race in 2015 could also be in contention.

Kate Doughty (coach Corey Bacon) is the highest ranked athlete competing and looking for another strong performance after her dominating win at the Penrith WPE 3 weeks ago.  Anna Bychkova (RUS) who was 5th at Penrith or the teenage Brazilian Tamiris Hintz are the most likely to provide some competition

Jack Swift (coach Corey Bacon) and Joshua Kassulke (coach Josh White) will take on a very strong field in this, the deepest class in paratriathlon.  2015 World Champion Stefan Daniel (CAN) is the favourite with Jose Estrada Sierra (MEX) currently ranked 3rd on the List most likely to challenge him. After that Jack, who finished 5th at Penrith WPE and Josh 6th at Penrith WPE will be amongst the next group fighting it out for Rio Qualification points against their nearest rivals including Alexander Yalchik (RUS) 2nd at Penrith, Asian champion Keichi Sato (JAP), Carlos Rafael Viana (BRA) who was 3rd at Penrith,  Qimin Yu (CH) and Peter Boronkay (HUN).

The PT1 paratriathletes complete the bike leg on a handcycle (pictured above) and the run on a racing wheelchair.  These pieces of equipment are highly specialised, very expensive and require creative solutions to the training options at big city races.  Due to being so low to the ground a ride on a busy street in Yokohama is not only difficult but also forbidden.  So the Australian PT1 team for this weekend’s Yokohama WPE set up the handcycle rollers in a shady part of the race venue Yamashita Park to get the kms into their arms. 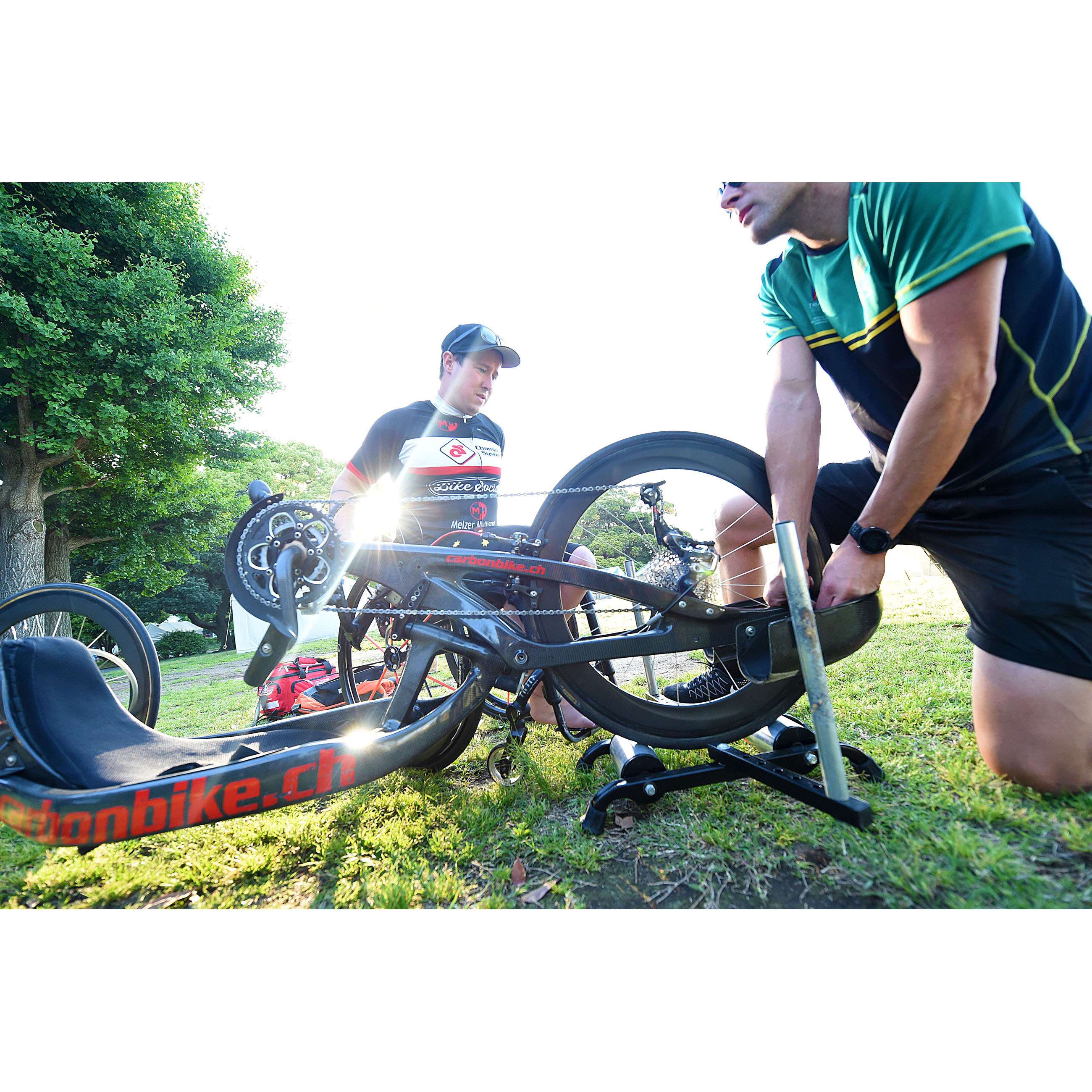