Australia’s Ryan Bailie had a career best year in 2015 but his fourth place finish today at the Jewel WTS Gold Coast delivered him an elusive automatic Olympic nomination place for Rio.

It was a Spanish 1-2 as the all-conquering Mario Mola kept his winning streak alive in 2016. It was another clinical performance from the Spaniard who put himself in the main bunch the entire race before streaking away from Fernando Alarza in the final stages to win. A return to racing saw a dramatic finish by Great Britain’s Jonny Brownlee struggling to remain on his feat but still managed to finish third. 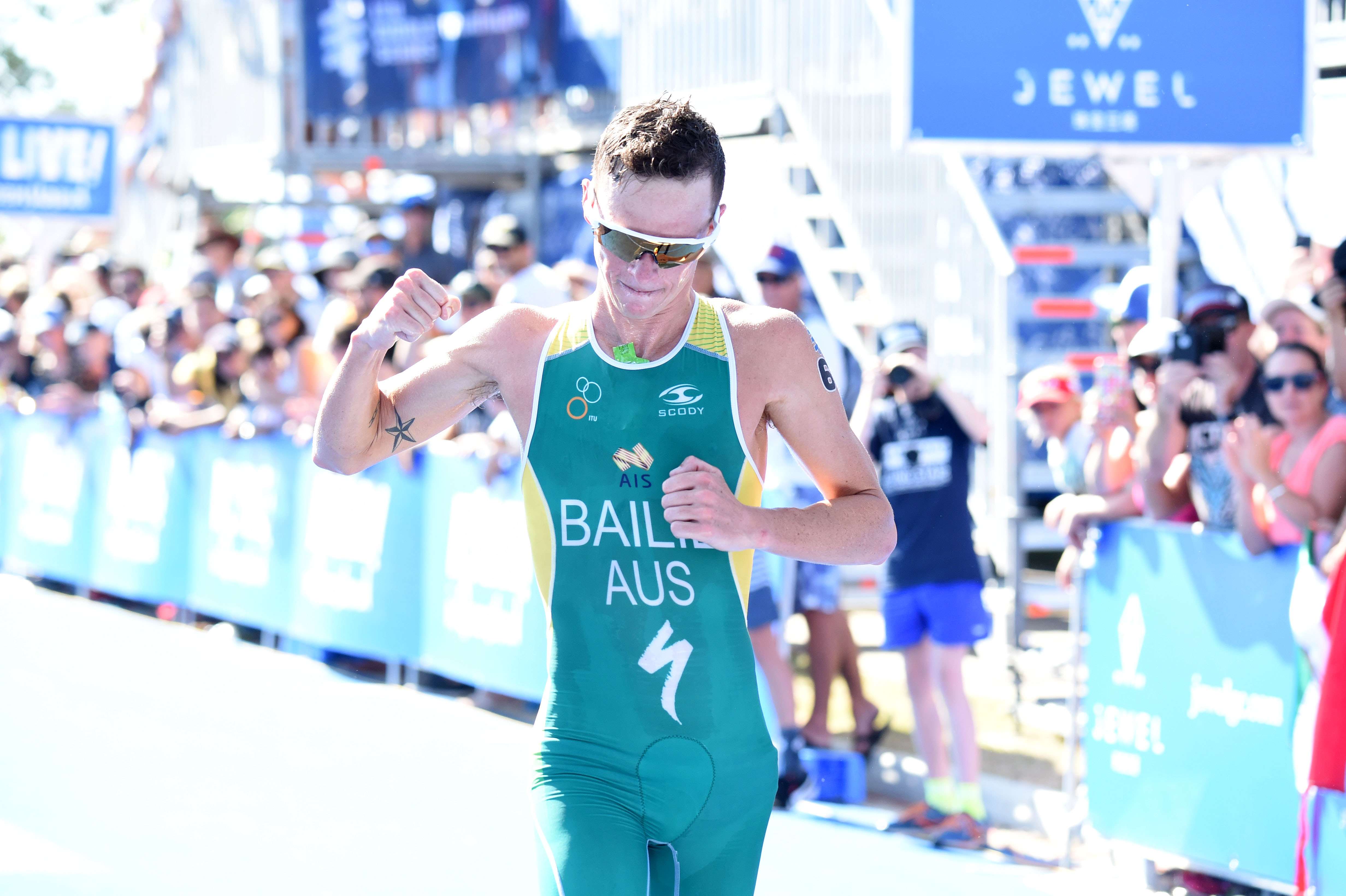 It was a great day for the Australian men who finished with three in the top ten. Ryan Fisher finished just behind Bailie in fifth, Jacob Birtwhistle ran from a long way back to grab ninth, while Aaron Royle continues to build his preparation for Rio, having secured his place on the team early finishing 17th.

“I owe a lot to Jamie (Turner) and the just the Wizards pretty much they’ve help me so much. I’m pretty much speechless,” said Bailie.

“If you had told me six years ago I’d be going to my first Olympic Games I probably would have laughed at you.

A veteran of two Olympic campaigns it was the final chance for Courtney Atkinson to grab an automatic spot but a mistake racking his bike and ensuring 15sec penalty saw him fall out of contention despite being in the front group on the run and may draw a close to the dream of a third Olympic birth, eventually finishing 29th.

With a strong current running in the Broadwater the far side was prime position. The familiar figure of Richard Varga (SVK) was first to emerge and Aaron Royle was the first of the Aussies, quickly followed by Bailie, Fisher and Atkinson to make the front group.

Jacob Birtwhistle missed this opportunity and was left to work in the chase group.

In the first lap of the bike they were joined by seven others, including Royle, Ben Kanute (USA) and Alessandro Fabian (ITA), to create a 12-strong lead pack on the bike.

But with the likes of Alistair Brownlee (GBR), Ryan Fisher (AUS), Ryan Bailie (AUS), Thomas Bishop (GBR) and Mola in the chase group, the leaders were hard-pressed to make their break stick.

A 15-second gap from the second lap was cut to nine seconds just one lap later, and they came together within the next kilometre where the peloton then tallied 29.

An episode of breakaway attempts then occurred in the latter half of the bike leg. Alistair Brownlee was first to enjoy a solo ride and his pushed through a lap on his own. But he retreated back to the pack when he was unable to gain any company.

It was then that Ben Shaw (IRL) and Tom Bishop (GBR) went together on a breakaway push and were able to create a gap of 50 seconds and enter the second transition zone together with a slight advantage.

Coming into T2 the four Australia’s were in this next group, Royle, Fisher, Bailie and Atkinson. After the first lap Mola and Brownlee managed to reel in Shaw and Bishop. For the Australian’s it was Bailie who made the move through the group and was in podium contention. In the end it was fourth for Bailie and a Rio birth.

“The heat wasn't really an issue I pulled a muscle, wasn't cause I couldn’t hang in it was just my calf kept tightening, I was so scared I was going to pull it, I’ve had a few calf drama’s,” said Bailie

“This is my second top place, the podium is still beckoning but just wanted to take it out of selectors hands, I didn’t want it to go to discretionary,” he said.

Australia’s Performance Director Bernard Savage said it was a super day for the Australian’s.

“The level of racing from all the team against the quality fields here today was fantastic.

“We’re now looking forward to see how it plays out in the next month and the standard they raced today show clear indications of even better performances to come.”