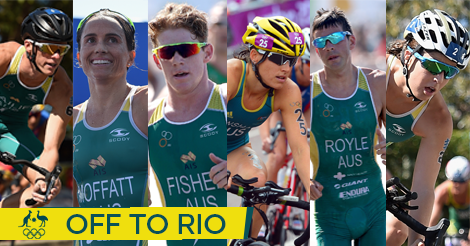 TRIATHLON: A six strong triathlon section has been announced in Sydney, featuring two Olympic bronze medallists and a handful of fresh talent eager to make their Olympic debuts.

A duo of Ryans, Ryan Bailie and Ryan Fisher will be joined by Aaron Royle in the men’s event, while Beijing bronze medallist Emma Moffatt and London bronze medallist Erin Densham will headline the women’s team alongside the in-form Ashleigh Gentle.

Moffatt and Densham will re-write the Australian history books and be the first triathletes to compete at three Games.

“It is really exciting, it’s probably just as exciting as the first time,” said 31-year- old Moffatt who had the magic bronze moment with Emma Snowsill in 2008 before a fall on the bike ended her London race.

“It is a journey I’m looking forward to going on again and I think two Olympics worth of experience will really help me.”

While Moffatt and Densham are experienced Olympic competitors, the remaining four athletes will be having their first Olympic experience in Rio de Janeiro - which Moffatt says they should just enjoy their first time.

“It is a journey that is different to any other in terms of racing so it’s important to enjoy the other aspects that come along with an Olympic Games.

“When it comes to actual race day, just treat it like it is any other race because you will get too nervous if you put it on too big a pedestal.”

Densham, also 31, said to be selected on her third Olympic Team is absolutely amazing.

“I am so thankful to get this opportunity to show what I can do; I always put pressure on myself to be the best possible athlete I can be and to get the best out of myself and that’s what I aim to do over the next 80 days…I’m really excited.”

Despite recent injuries, Densham believes that by the time she appears on the Rio start line, she will be fit and ready to go, especially after a positive experience at last week’s Yokohama World Triathlon series race.

“The work I did and the improvement I made in the two-and-a-half weeks leading into Yokohama was amazing and coming out of transition off the bike I began to feel what it’s like to run like me again,” said Densham who is currently training in Canada.

“And I thought, I can do this, it is like old times. I wasn’t expecting to win but I knew I was heading towards a good result until my hamstrings started to hurt over the final five kilometres.”

Densham and Moffatt attended the Beijing 2008 and London 2012 Games and both will be looking to add a second Olympic medal to their collections.

“It’s like I can see it, I can touch it and it may sound a little crazy but the sky’s the limit, knowing what I can do, I’m super excited,” said Densham. “With my team here and with everyone at Triathlon Australia we have put a plan together to be ready to race come August 20 and I know I have nothing to lose.”

Rounding out the women’s event will be 24-year-old Ashleigh Gentle, who has proved to be a serious threat on the International Triathlon stage.

The Gold Coaster has already claimed two silver medals in Abu Dhabi and Yokohama on the 2016 World Triathlon Series circuit after only four races.

Gentle will join fellow Queenslander, Ryan Fisher on the Team after both athletes impressed selectors with their recent performances.

Fisher, 25, finished a close 5th behind Bailie at the recent World Triathlon Series race on the Gold Coast, which doubled as an automatic selection race for the first Australian in the top ten.

A series of strong races including a 4th place finished at the 2016 OTU Oceania Championships and 12th at the ITU Abu Dhabi World Triathlon race cemented Fisher’s spot on the Olympic Team.

Wollongong based Aaron Royle and Bailie will also debut at Rio, after both securing automatic qualification at the Rio Test Event and Gold Coast World Triathlon Series respectively.

Bailie, who was born in Johannesburg, paid tribute to his family with his mum Kerrie and twin sister Alex attending today’s ceremony, acknowledging the huge role they have played in his Olympic selection.

“Your family makes so many investments along the way so we can pursue our dreams in sport so to attend the team announcement on our behalf is very special for us and for them,” said Bailie, who, alongside Royle will also prepare for Rio under coach Jamie Turner in Spain’s Vitoria-Gasteiz country.

“They have been our biggest supporters and our sponsors over our careers and we could not have done this without them and really happy they could attend today,” said the 25-year-old.

Bailie was named Best Male Athlete and Athlete of the Year at the 2016 Triathlon Australia and largely attributes his success to coach, Jamie Turner.

“I have been with Jamie Turner now for six years and he has made us the athletes we are today and shaped us into the people we are as well, teaching us so many life lessons outside triathlon, to help set us up after our careers,” said Bailie.

“I couldn’t even do a tumble turn in the pool until I started training with JT; I would not be an Olympian in 2016 without him – so much of it has to do with him as to where I am now.”

Bailie and Royle have set up camp in Vitoria-Gasteiz in Spain’s Basque Country to prepare for their first Olympic appearance.

Australian women have featured on the podium at every Olympic Games since the sport was introduced at Sydney 2000, with Greg Bennett’s fourth in 2004 and Miles Stewart’s 6th in Sydney the best from the men. Royle, Bailie and Fisher will be looking to change that on the tough course around Copacabana Beach and Ipanema in Rio.

Stewart is now CEO of Triathlon Australia and was on hand to lend the support and advice to the 2016 Team. Gentle, Moffatt and Fisher were all present at the announcement.

These six athletes take the overall 2016 Australian Olympic Team to 144 from 12 sports, with an expected final Team of around 440 athletes. Complete biographies on all selected athletes here>>>