Bill Chaffey “slows down” as pace hots up for Rio spot

Bill Chaffey “slows down” as pace hots up for Rio spot

Five-time ITU Paratriathlon champion Bill Chaffey knows he’ll be ready to go as fast as he can in Rio later this year, if he slows down.

Chaffey, the remarkable 40-year-old wheelchair triathlete from the Gold Coast, lost his chain coming out of transition in Triathlon Australia’s National Paratriathlon Championships at Robina, on the Gold Coast today. 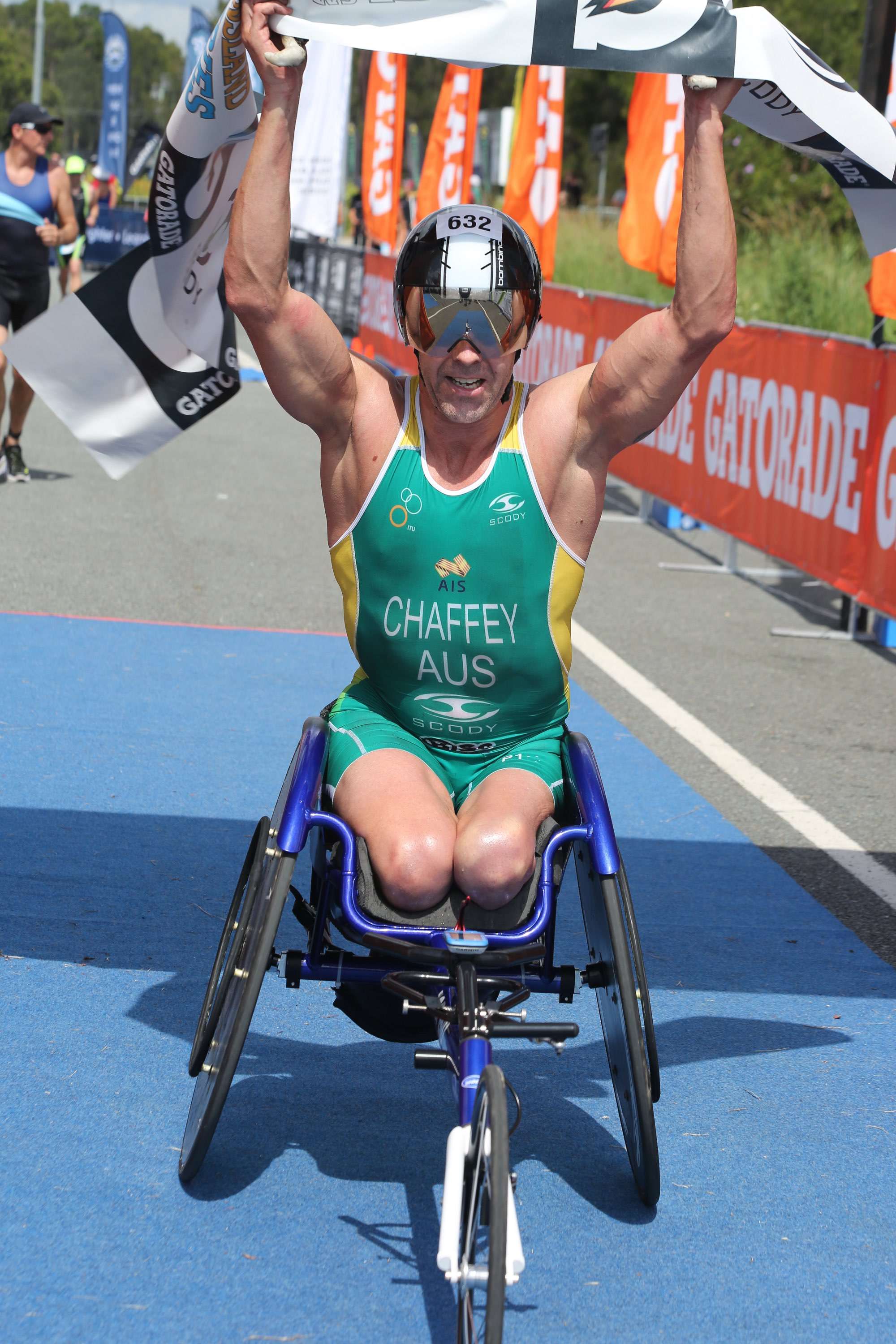 And he is the first to admit, there have been moments in the past when he has become flustered when things have not gone according to plan and he is in too much of a hurry to get his race back on track.

“When things like that happen I’ve learned to slow down now, I do it a lot more relaxed and because I am relaxed I’m actually faster,” said Chaffey, who smoked the fields in the testing hot morning conditions, similar to Rio.

“I used to have a lot of trouble; they used to irritate me but now I am a lot more calm in those situations, telling myself  ‘just put the chain back in, it’s all fine.’

“It happened just as I was coming out of transition, where we have to stop at the start line; I spun the pedals back and my chain just dropped off.

“It took me a few seconds, not quite a minute to get my chain back on but once I got out on the course I was fine.”

What transpired was a near faultless display as he sped around the fast and furious Robina course on his cycle and wheelchair in a stunning time of 57 minutes 58 seconds, which saw him first across the line fastest of all five categories.

It was his first race since winning his fifth world ITU gold medal in Chicago last September – securing a position for Australia when the sport makes its debut in Rio in the PT1 category as did fellow world champion Katie Kelly in the PT5 vision impaired class.

“All these races are important to stay number one in Australia and to get that all-important spot and with the Oceania Championships in Davenport (TAS) next month I can hopefully get a win there and add points to my qualification for Rio,” said Chaffey.

Kelly, even though she was without her US-based Sydney 2000 silver medal-winning guideMichellie Jones (replaced by Jen Davis for the day), was still able to show her class –under strict instructions from coach Corey Bacon not to put any stress on a troublesome Achilles.

“The adrenalin kicked in at one stage and Jen had to tell me to slow down and get back on the pace that Corey wanted and in the end it was a nice little hit out for the season opener,” said Kelly.

“I haven’t done a race since Chicago in September and you hope you’ve still got it there and it was good to blow the cobwebs out.”

“I have had tremendous support from the AIS and their sports science guys in Canberra where we’ve taken it very steady; there is no need to rush into anything. It has given me a great opportunity to focus on my swim and bike,” says Kelly.

“The Olympic year is off and running and Rio is here and we have mapped out the plan for this year and I will be joined by Michellie in April for the WPE in Penrith.

“Everything is underway now; it’s amazing how quickly nine months comes around when you break it down per four weeks.

“It’s all about doing the right things and getting back on track with my running and looking forward to Devonport.”

And while the name Bill Chaffey is well and truly on the map and Kelly has made the most of her opportunity over the past 12 months, there is a new player on the paratriathlon scene who is making the most of his chances as well.

Kassulke, an arm-amputee and Swift, a leg-amputee, are both classified in the Paralympic PT4 category.

The pair finished within 20 seconds of each other in the showdown of the day, to show the kind of depth that is developing in Australia’s Paratriathlon ranks – a team that is one of the strongest in the world.

Kassulke, who lost part of his right arm in a work accident in 2013, only had his first paratriathlon in March last year and won his open division at the ITU World Championships.

In the last 12 months he has taken 10 minutes off his best time and lost eight kilos, which he puts down to QAS coach Josh White.

“There is no doubt that linking up with Josh and Steve Moss has changed my life around as an athlete,” said Kassulke.

“I suppose cycling was my sport but by no means National level and I was a State swimmer at school but with my disability I have had to completely re-develop my swimming stroke and that’s probably my worst leg.

“But the biggest thing that I have learnt is to focus on the process rather than winning.”

And what about Rio?

“It’s a long way away and there is a lot to do and a lot of points to make up and if I do go I just don’t want to go and make up the numbers, I want to be competitive,” said Kassulke.

Australia’s full band of Paratriathletes will now set their sights on precious points at the OTU Oceania Championships in Devonport on February 21 and 22. 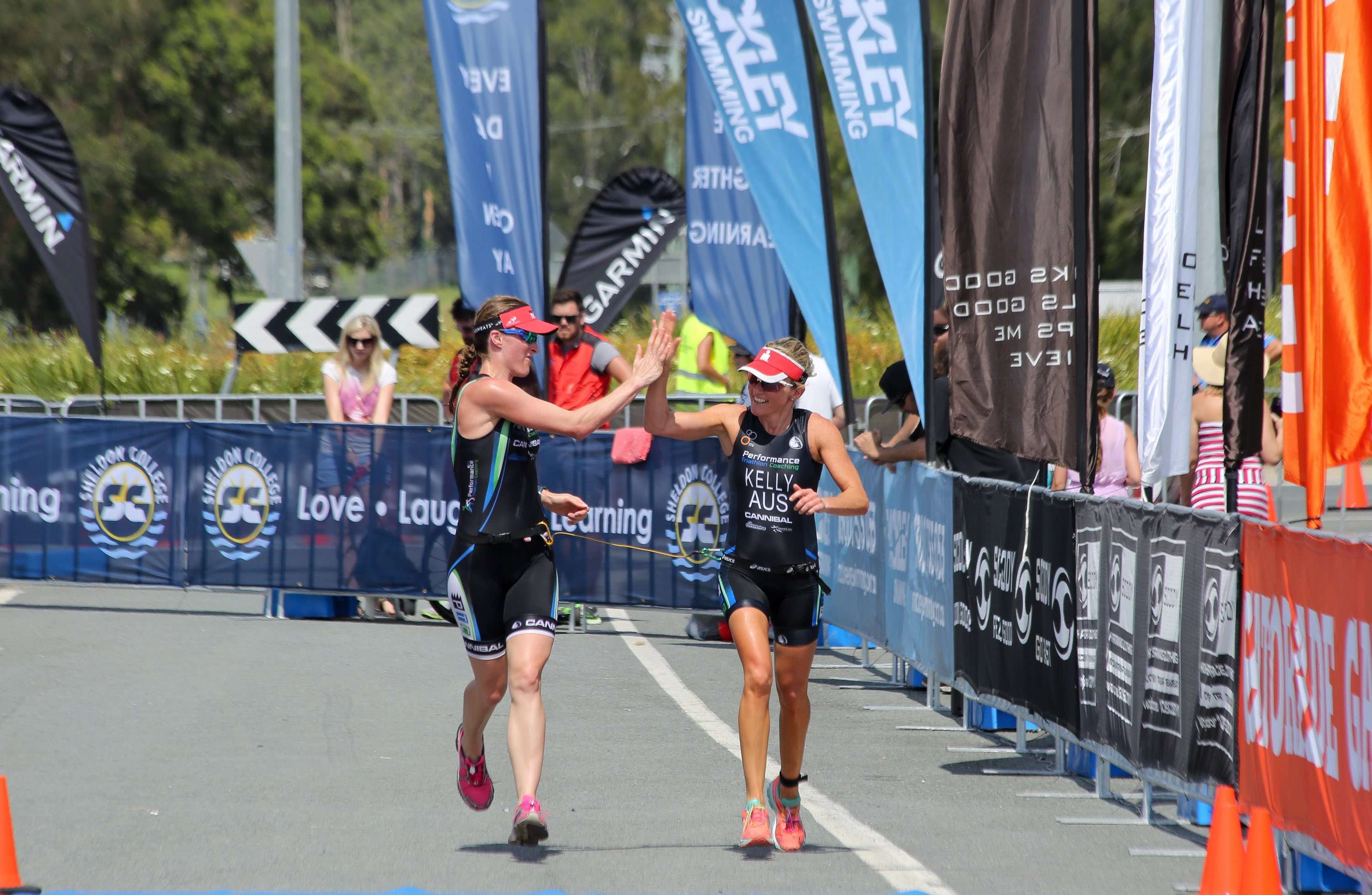 Here in the full list of medallists from the: