“I’m here to win,” said Allen, who has won 17 Xterra championships during his career, including four this year alone. “I’ve done everything I can do to win the race.

“I’m good enough to win and I’m happy to be racing the best cross athletes in the world.”

The 30-year-old New South Wales native is fresh off a pair of Xterra wins in August, including races in Germany and the Czech Republic.

“I’m in a very good place at the moment both physically and mentally,” he said. “My team and I have been working really well together and I can’t wait to represent Australia and race on Saturday.” 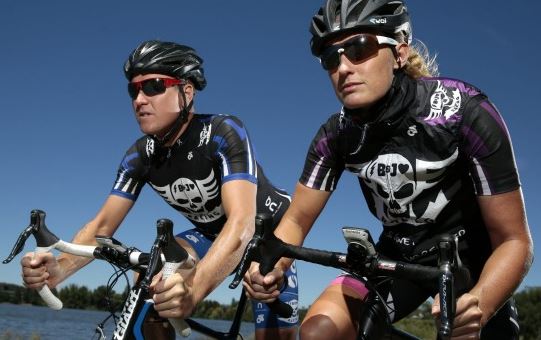 Aside from Slack, 32, who like Allen resides in Wollongong, New Zealand’s Elizabeth Orchard will also be representing the Asia-Pacific this weekend in the elite women’s division.

Unfortunately for fellow TreX ambassador Renata Bucher (SUI), who first raced the region in 2009 at Xterra Italy, she has been plagued by illness since arriving earlier in the week.

“After my arrival on Monday, I became sick and my body is still fighting something,” said the 38-year-old. “I will still enjoy the time the best I can.

“It is fantastic to see, how many athletes from all around the world find their way to this little lovely village here in Sardinia.”

The ambassadors are not the only TreX representatives attending this year’s event. In2Adventure directors Simon and Robyn Lazenby are also on hand promoting next year’s historic move to bring the X-Tri Worlds to the Southern Hemisphere for the first time when the 2016 event is held in Australia at Lake Crackenback in the heart of the Snowy Mountains of New South Wales.

“It's such a great opportunity to be here in Sardinia with our Australian Team and with athletes from across the globe,” said Robyn Lazenby. “The event has a wonderful atmosphere, and it's so great to be able to talk with the athletes and realise that there is a real 'buzz' about travelling Down Under.

“It is also tremendously encouraging to hear Marisol Casado, President of the ITU say that she saw "cross triathlon as the future of triathlon" at the elite's briefing today.”

“We're so looking forward to the weekend's racing and especially cheering on our Aussie hero Ben Allen in the elite race on Saturday and then all our TreX family racing the age group race on Sunday,” said Simon Lazenby. “It's a tremendous event atmosphere and the location is spectacular, making it a real treat for everyone who’s racing.

“We know whatever the outcome our that our Aussie athletes will be giving everything they have and will definitely do us proud.”

With the event now just 14 months away, Australian host In2Adventure has unveiled a Pathway Partner program designed to allow all interested athletes an opportunity to participate in this ground breaking event.

The event marks the first time in the race’s five-year history that the world championships have been hosted in the southern hemisphere, with previous locations including Spain, US, Holland and Germany. The Pathway Partner program is ideal for those athletes looking to don the ‘green and gold’ and represent Australia on home soil.

Aside from promoting next year’s event while overseas in Italy, In2Adventure is already quickly connecting with clubs, coaches and squads throughout Australia who will be hosting training and development programs aimed at helping competitors qualify. There are even opportunities on the official In2Adventure website for those who offer training for cross triathlon including mountain biking, trail running or swimming and are interested in becoming a Pathway Partner.

“It is so great to be working with some fantastic clubs and squads throughout the country who have recognised the value and growth potential of cross triathlon within Australia,” said In2Adventure race director Simon Lazenby. “We are finding that athletes are constantly looking for a new and exciting challenge and in the world of triathlon, this is what X-Tri brings to the table.”

The ITU is made up of five regional confederations of which Triathlon Australia is a member, and as host nation that means that there are 25 slots up for grabs for each age group on the Australian team.

“Our ‘Pathway Partners’ are offering specific training programs for all levels to enable athletes to get ‘off the beaten’ track and develop their skills in mountain biking and trail running,” said Robyn Lazenby. “Plus, there’s the opportunity to qualify to represent Australia in this new era in triathlon which is experiencing phenomenal growth in its early years in Australia.