“Emma Snowsill has been an inspirational champion and wonderful role model for the sport of Triathlon in Australia” said Triathlon Australia CEO, Anne Gripper last week following the Olympic Champion’s announcement of her decision to retire from elite competition. 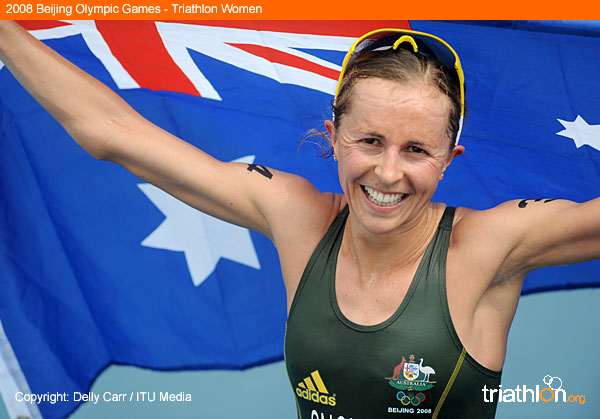 As the Gold medallist at the 2008 Beijing Olympics, three time ITU World Champion and gold medallist at the 2006 Melbourne Commonwealth Games, Emma is Australia’s most successful triathlete. She first came to prominence when she won the triathlon at the 2001 Sydney Youth Olympic Festival. After being selected for a scholarship at the Australian Institute of Sport in 2001, it did not take Emma long to establish her place as the best female triathlete in the world, winning the 2003 ITU Elite World Championships in Queenstown, New Zealand.  She proceeded to assert her position as the most consistent female triathlete of the time by winning back to back World Championships in Gamagori, Japan in 2005 and Lausanne, Switzerland in 2006, before her gold medals at the 2006 Commonwealth Games and 2008 Olympics.

As importantly as her achievements on the field of play, Emma has contributed significantly to the profile and recognition of the sport of triathlon through her outstanding sportsmanship and demeanour. Always respected by her Australian team mates and international competitors, Emma has been a great model to the younger athletes who have attempted to follow in her footsteps. The gracious manner in which Emma accepted disappointments along with her successes provides a fine example of the integrity she brought to the sport.

Emma was awarded with a Medal in the Order of Australia (OAM) in 2009.  This honour and her recent appointment as an Amabassador for the Youth Olympic Games in Nanjing later this year is a testament to the regard in which she is held by the Australian Olympic Committee and the broader sporting community.

Despite her retirement from elite competition, Emma will not disappear entirely from the sport she loves and which loves her.  “It is great news for us to hear that Emma is keen to remain involved in the sport as a mentor and coach and we are actively exploring those opportunities”, said Bernard Savage, Triathlon Australia’s National Performance Director.  “We look forward to Emma’s contribution to the development and success of our future champions”.

On behalf of the Board, the staff and the members of Triathlon Australia we say “thank you Emma – thank you for being such a great champion and ambassador for our sport.  We wish you all the best for the next chapter of your life.”