PORT MACQUARIE, NSW (May1, 2016) –  Tim Reed had to dig deeper than before to claim his maiden IRONMAN victory at IRONMAN Australia in Port Macquarie today.

Reed was greeted by family and friends after his come-from-behind win, made more challenging with the passing of one of his closest friends this week.

“I had something to fight for today. I lost a really great friend and he was coming up to watch me. I gave it everything for him,” said an emotional Reed. 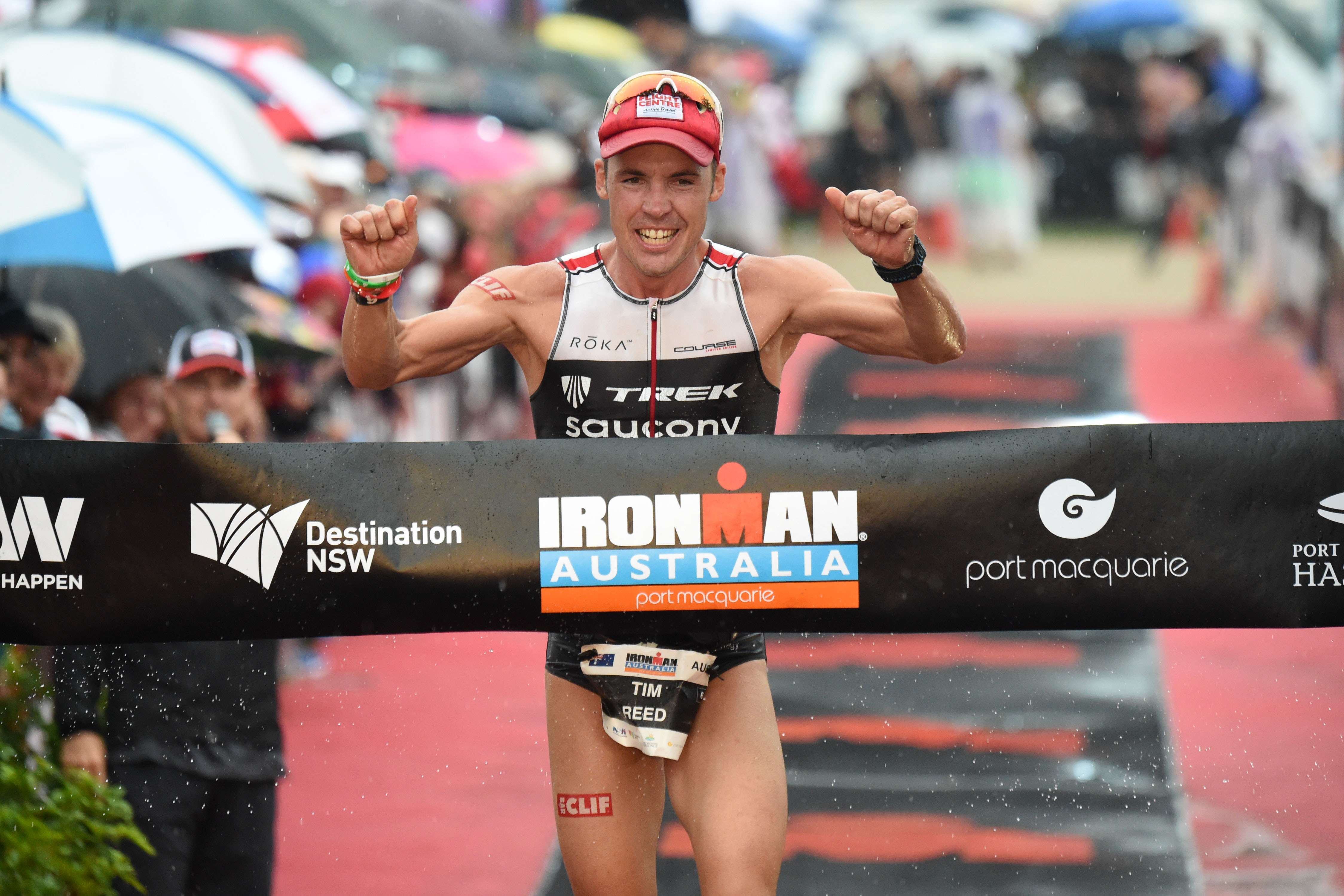 The 31-year-old is one of the world’s premier triathletes over the IRONMAN 70.3 distance, as the current Asia-Pacific champion and with a bundle of victories around the globe. But so far the IRONMAN has proven a step too far.

Today he ran down an eight minutes 24 second deficit to fellow Australian Clayton Fettell on a wet afternoon in Port Macquarie, winning in 8:16:29, with his missing friend never far from his mind nor the support from his family.

“It is not about the sacrifice that I make but my wife puts up with a pro athlete then there’s my family, my friends and my training partners, there are just so many people behind this performance. I owe it all to them.”

He finished nearly six minutes clear of Queensland’s David Dellow with Fettell, who fought so bravely in a day spent mostly on his own at the front of the race, finishing third seven minutes behind the winner.

Fettell and Josh Amberger led out of the swim before Fettell took his chances on the first lap of the bike. He opened a six minute buffer after the first lap and took an 8:24 advantage on to the run.

Reed started to make inroads from the get-go and by mid-race the outcome was clear, although Fettell hung on, finishing third after David Dellow responded with a powerful second half of the run to earn second.

The women’s race followed similar lines with defending champion Michelle Bremer, the Australian-based New Zealander, seemingly impregnable as she opened a lead of 12:38 off the 180km bike.

Gerdes, a noted runner who went sub three hours for the marathon to finish 4th in Western Australia in 2014, gradually chipping away at the lead. She took four minutes from the lead after 16kms but as Bremer began to slow, then Gerdes pounced, finally overtaking the Kiwi after the 36km mark. 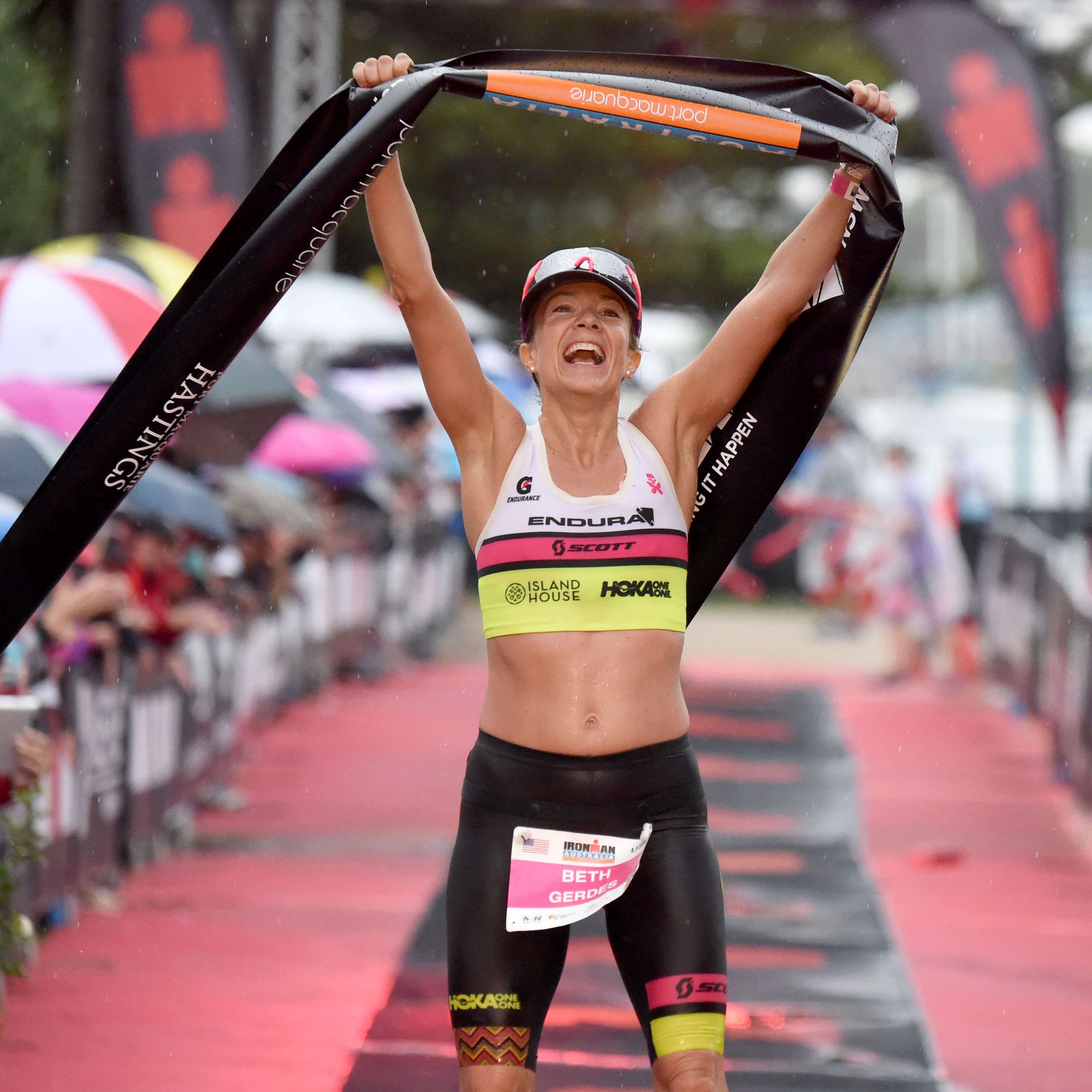 On the back of a 2:55 marathon, Gerdes claimed the win in 9:12:25. It backs up her victory in Switzerland last year although for a long time today she did not think it possible.

“I thought I would not catch Michelle but I never gave up,” said Gerdes who lives much of the year in Australia with fiancé Luke Mckenzie.

“I’ve done all of the IRONMAN races in Australia but this is the first one I’ve won so that’s special.

“With the weather the run was more like a Tough Mudder than a marathon but that was fun.”

New Zealand’s Gina Crawford led out of the swim but Bremer pushed through to the lead early on the bike, extending her advantage to seven minutes after the first lap and over 12 minutes on to the run.

Gerdes whittled away until the final quarter of the race when Bremer faded and the American pounced.

Turia Pitt was one of more than 2400 age group athletes racing. She swam the 3.8km in 1:16, riding the 180km in 7:13, and crossed the line to thunderous applause, epitomising that Anything is Possible. 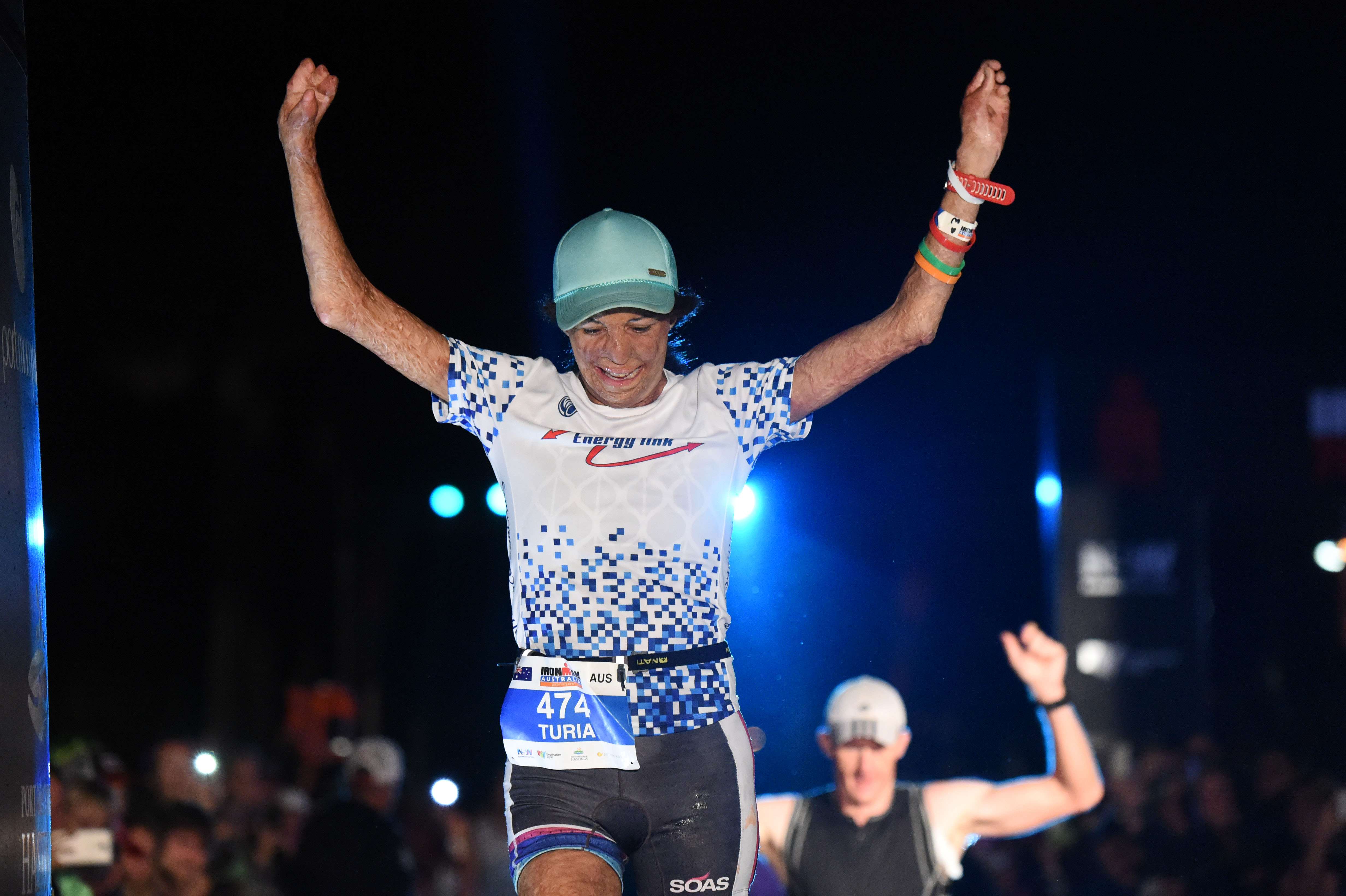