Sam Harding: From Track to Triathlon


Many things happen at the completion of an Olympic and Paralympic cycle – athletes come and athletes go, but not very often do athletes transfer sports and thrive while doing it. Not only has Paralympian and T3C member Sam Harding transferred sports, but the former track and field athlete continues to exceed expectations.

Although selected for the 800m at the London 2012 Paralympics, Harding missed the start line as a result of glandular fever and struggled to recover. In 2015 he made the switch to coach Philo Saunders and gained selection for the Tokyo Paralympics in the 1500m event. Nine years after withdrawing from the 2012 Paralympics, Sam made his debut in Tokyo and went on to finish 11th in the Men’s 1500m T13 final.

With a history of tandem cycling in his junior years and swimming under the guidance of Swimming Australia Paralympic Coach Yuriy Vdovychenko, the idea of triathlon wasn’t totally out of the realm of existence.

“It’s always been an option, I guess. Since 2021 I had been considering what I would do after Tokyo and I figured it could be a good year to have a rest [almost] from running and still stay super fit – it’s going well so far,” Harding tells TACT.

“Yuriy is looking after me in the pool, I’m running 80-90km a week (instead of 120km) and my body is feeling really good. We’re slowly increasing the cycling and it seems to be somewhat of a winning recipe so far”.

A winning recipe might be an understatement considering some of the results so far:

Speaking to Triathlon Australia after the Oceania Paratriathlon Championships in Stockton, Jono Goerlach couldn’t speak more highly of Sam, and the success he’s had as a newcomer to the sport.

“I’ve been calling him the real deal because he’s already racing at the level of the guys that are the benchmark in my category in the vision impairment,” said Goerlach.

“It's awesome to see Sammy transition across from athletics and he's already doing so well, and he's got an amazing guide in Luke (Harvey) as well”. 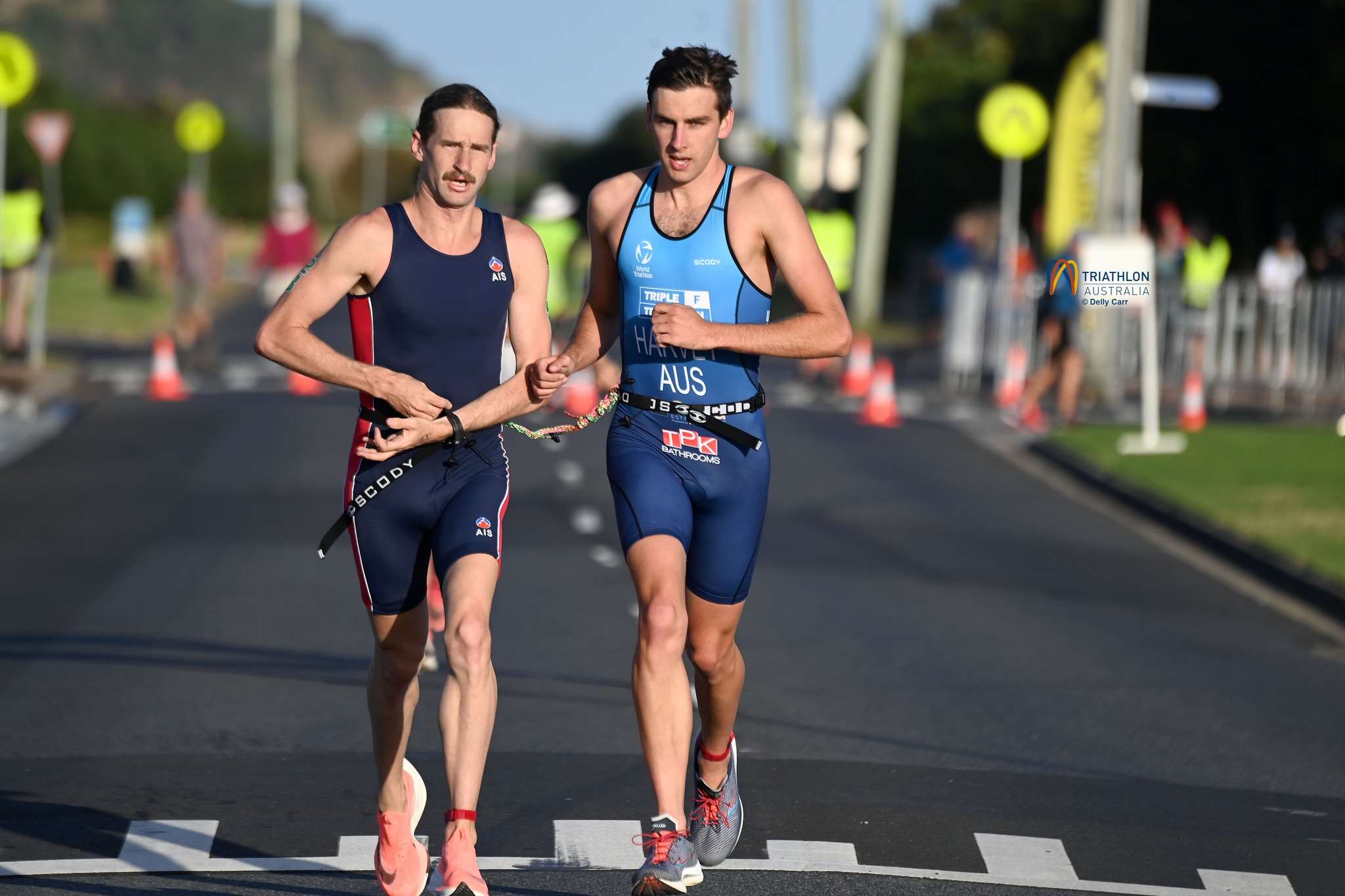 With a number of clubs to choose from across Canberra, Sam had to make a decision as to where he would end up and under whose guidance.

“I was looking for a triathlon club to join and saw Meg (Hall) on the Triathlon Australia website. I saw she’d coached a few of the other paratriathletes. I gave her a ring and she was super helpful – just knowing about the system and what to do / how things would go,” Harding said of his decision to join T3C.

“Now if I ever need some advice, she’s always happy to call and pretty keen to keep up with results and things”.

Although Sam is a relatively new name and face to many of our Triathlon ACT members, he’s already completed his first local events and from all accounts, is ready for more.

“I did two triathlon events earlier this year and they were good fun. They were the first triathlons that I did, and I did them individually and not on the tandem. The courses were really good for me – a lot of out and back running and riding. I’ve got tunnel vision so what I can see in front is quite good, just anything to the sides is not ideal,” Harding said.

“We’ll see what the schedule is for the rest of the year. Canberra events are great to test things and see how training is going”. 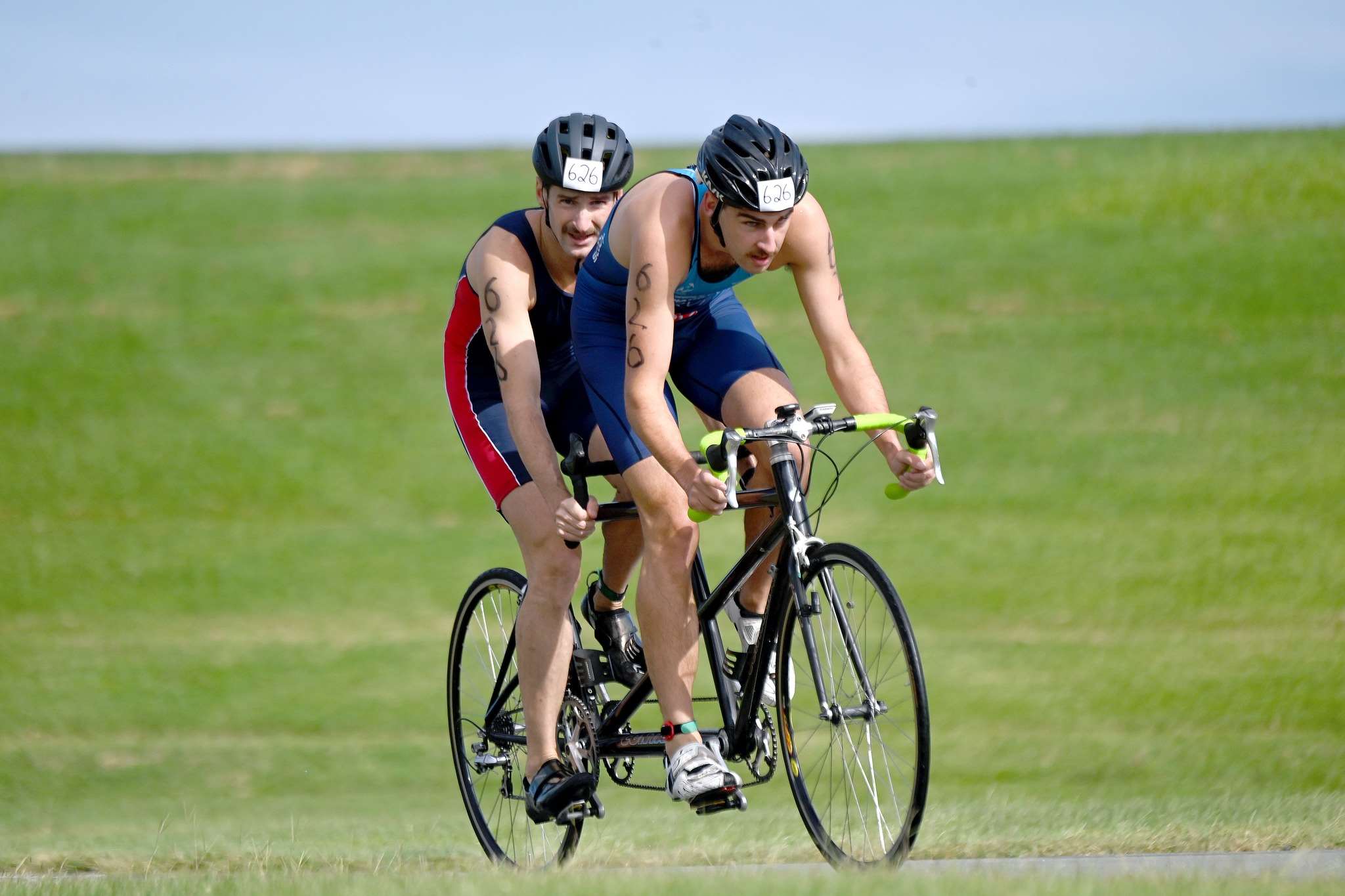 While he awaits news on the Commonwealth Games, Harding is getting ready to fly out to the 2022 World Triathlon Para Series race in Yokohama on May 14.

“We’ll see what happens with Commonwealth Games – it’d be amazing to get there,” said Harding.

“I have been in Canberra for twelve years now so I’ve got previous housemates that could be on the team, so many people that I would know – it would be awesome to be on that mix of a para and able-bodied team”.

Beyond Birmingham 2022, there’s World Champs at the end of November and the ever magic Paris in 2024.

“Yeah [I’m planning to stick with triathlon], I’m really enjoying it. Potentially if the programs lined up nicely, it’d be amazing to do athletics too – but triathlon is more the focus now,” said Harding.

“The people looking after me (Yuriy and Philo) they’re some of the best coaches in the world for each sport so surely..hopefully, I can pull something together for triathlon”.