Social media algorithms work in mysterious ways and while we (often) love to hate them, sometimes they introduce us to something or someone that we otherwise wouldn’t have been aware of. Sarah Blake discovered the power of Instagram algorithms some months ago, when she was presented with the MoveForLex profile on her newsfeed. In a bid to move for Lex, Sarah has forged herself a new path. One that involves jumping headfirst into the world of Triathlon and one that has (rather unexpectedly) changed how she approaches life.

“I was scrolling through my [Instagram] suggest posts and came across a video of a girl dancing to song Verge, by Owl City. I noticed the username was MoveForLex and I was curious,” she tells TACT.

“I am not sure why, but I just felt connected to her story - maybe it’s that we’re a similar age, or that I just knew the impact this was about to have on me”.

For those unfamiliar, in July Noosa triathlete Alexa Leary suffered significant brain injuries after a horrific cycling accident while training. Shortly after the accident, #moveforlex was born. The community-based campaign has stretched across the country, moving beyond the triathlon audience. It encourages people to move for those who can’t while simultaneously allowing for an avenue that helps Alexa (and her family) connect with those supporting her recovery. 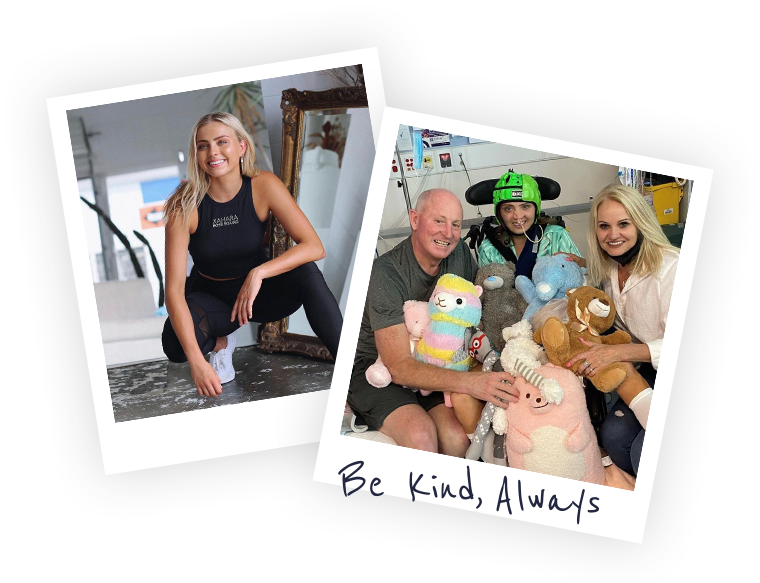 After following Alexa’s story for a month or so and learning of her pre-accident lifestyle & recovery process, Sarah was inspired to start her own triathlon journey. Initially registering for the Bateman’s Bay Triathlon in February 2022, Sarah says her plans quickly evolved after falling down the Triathlon rabbit hole.

“I was just going to do my own training – have a bit of fun and do it for Lex, but I kept getting so inspired and interested in the sport. I found myself researching, watching videos of triathlons, and decided that no, I want to start taking this seriously”.

After this revelation, a road bike was purchased (aptly named Lex, no less) along with a swag of training gear - there was no going back. A quick chat with her physio turned into a search for a triathlon club and before long, Sarah was onboard with Megan Hall and the team at T3C – a club that Sarah says stood out as a “fun, welcoming and supportive community”.

As a newcomer to sport, the environment to which one is exposed to can make or break an experience. Across the sporting landscape, you often hear of stories where a negative team, club or coaching environment can destroy an athlete as quickly as they make one. In the ACT, we’re incredibly blessed to have a contingent of clubs who pride themselves on offering the best possible environment (and opportunities) for their athletes. The team at T3C and their members have had a significant impact on Sarah, particularly with her introduction to the sport. 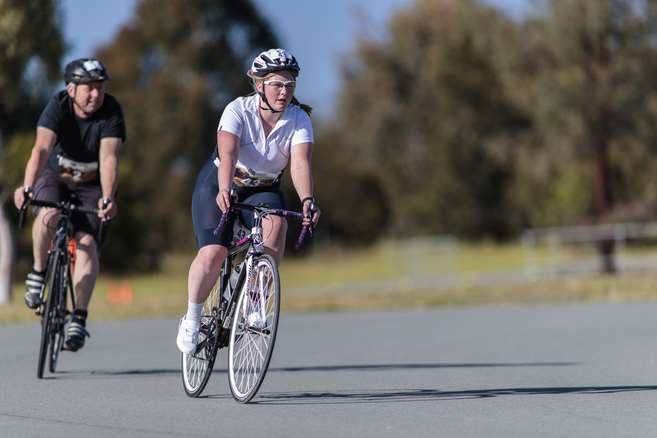 “School was hard for me as I struggled with anxiety and bullying. I was worried that I would get those same feelings from squad meets – but nope, not at all. The squad meets have been fun, challenging and so inclusive and encouraging,” she said.

Sarah credits her coach Meg (Hall) for the significant role she’s had (and continues to have).

“Meg is just amazing. She supports my physical training but also my mental training, which is so important to me – being in the right mindset for training and race days is just as important as the physical fitness”. 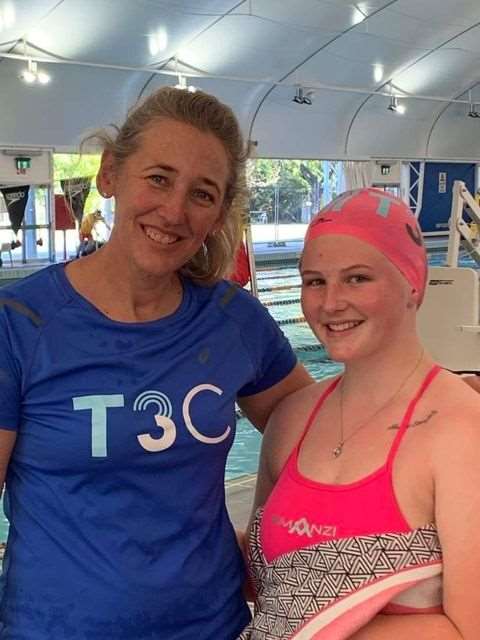 Sarah and her coach, Megan Hall.

While Bateman’s Bay Triathlon in February was due to be the main event, Sarah has since signed up for three others. In her first event multisport event, she took out her age division at Stromlo Duathlon / ACT Duathlon Championships and is ready to line up at Canberra Triathlon Festival in late November before taking part in Triathlon Pink on the Sunshine Coast next year.

As a born and raised Canberran, the significance of having her first ever triathlon in her hometown while being surrounded by those closest to her, is not lost.

“I was shocked at how quickly my support network grew and how quickly they all just jumped on board to support me. My dad has actually registered in the first three races with me – to get involved as much as he can and to be a part of these memories and achievements of mine. My mum has stocked and restocked the fridge with all the things I need to maintain my energy and recovery”. 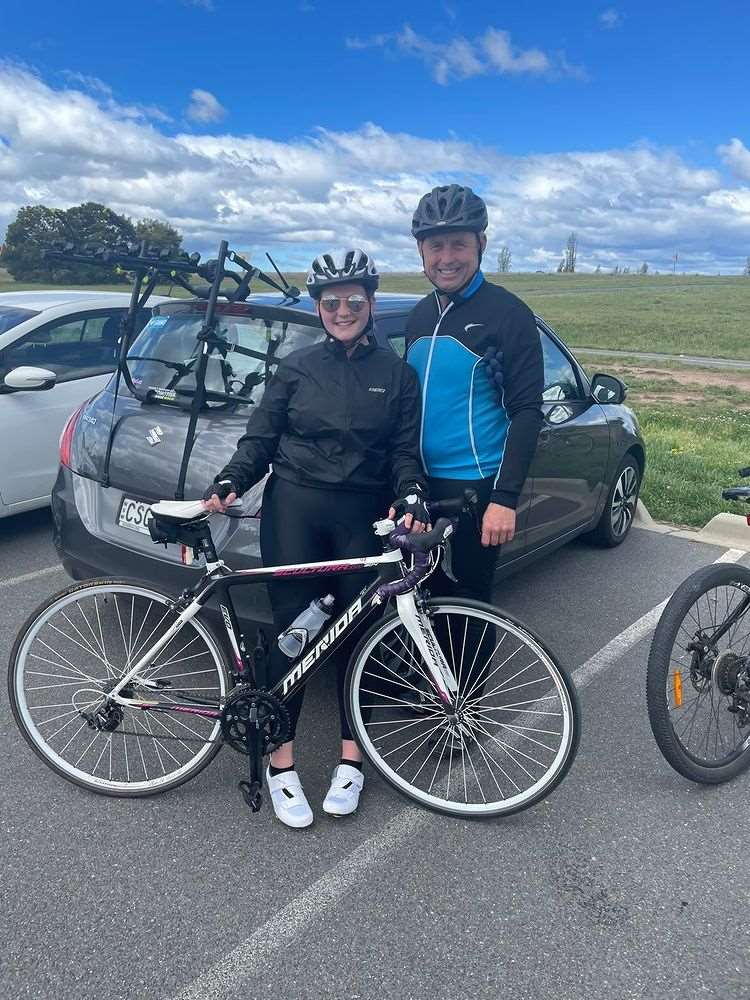 Image: Sarah and her Dad

While Sarah started her journey because of #MoveForLex, it’s clear that there’s more than one reason for sticking to this journey the way that she has. Support systems have been built, a genuine love for the sport has developed but beyond that, an incredible amount of self-growth and appreciation has occurred.

“The support and inspiration I get from Meg and the squad – I don’t love early mornings, but I love training. T3C as a club is so much fun. Whilst I'm out here kicking my goals, I am making memories. [They] make training feel like a social life and a way of living,” says Sarah.

“I am learning to set goals, instead of expectations. This takes the pressure off but also brings excitement. My goals used to be so weight loss focused, and this was so tiring because I didn’t see results. Now though, I have realised how amazing my body is and what it is capable of. This has not only changed my way for this aspect of my life but for work, social life and other activities I do”.

Sarah admits that while some days are a breeze, others are tough and require a little extra support from coaches and the team. She acknowledges that part of the challenge is accepting the bad days, which give perspective for the good days and each day, Lex is never far from her mind (or her motivation).

"I have been following Lex's story ever since I found it that day. The progress she's made has amazed me and kept me on track the whole way through - and I don't even know this girl. I would love for Lex to one day learn of the impact that she had on me, because it's truly changed my life".

You can learn more about Alexa Leary, her recovery and how best to support here.