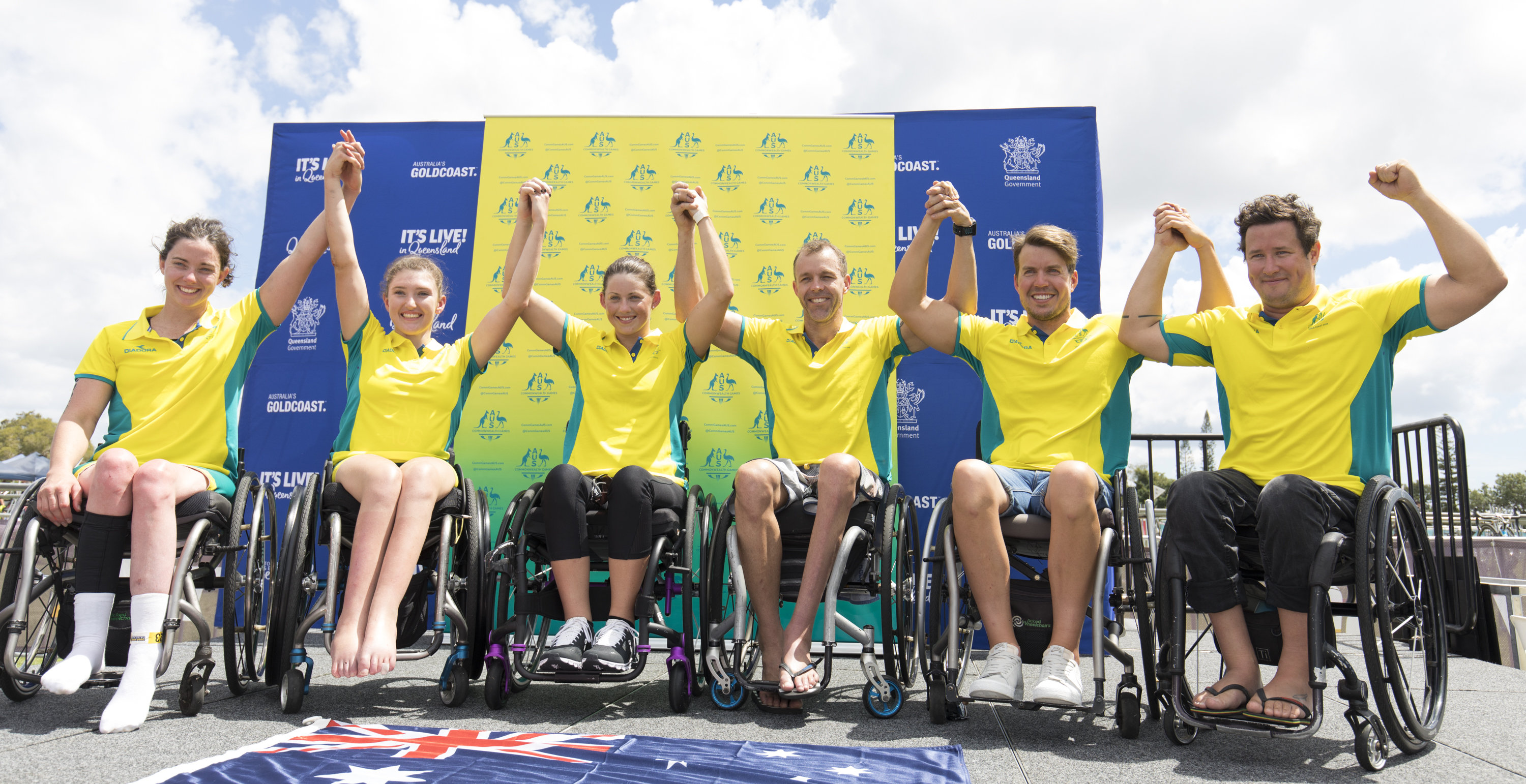 They will race over the sprint distance of 750m swim; 20km handle cycle and 5km wheelchair on April 7.

“The triathlon competition at Gold Coast 2018 will be hotly contested and our team features many world class performers.

“Triathlon presents the first medal opportunities of the Games and I am confident these athletes can get us off to strong start,” he said.

Rio Paralympian Chaffey, a police prosecutor from Tweed Heads, has been the poster boy of an Australian Paratriathlon Squad, rated amongst the best in the world.

Chaffey, a former Ironman triathlete, has been an inspiration to Australia’s fearless band of paratriathletes ever since his 2005 accident when he was struck by a truck while training for an Ironman in 2005, leaving him with a broken back in four places and resulting in spinal cord damage, as well as breaking his pelvis and elbows.

Chaffey spent five months recovering in hospital. As a result, he is paralysed in his left leg and has limited movement in his right but for the past decade he has dominated the PTWC paratriathlon scene around the world, winning world titles on the Gold Coast, and in Beijing, Auckland, London and Chicago.

After the heartbreak of missing a medal at the 2016 Rio Paralympics where he finished fourth, it is fitting that Chaffey gets the chance to set himself for his home Commonwealth Games.

“This has been a long time coming but knowing it’s the Gold Coast, is something that has kept driving me on,” said Chaffey.

“To be officially announced on this team for the Gold Coast Commonwealth Games is a dream come true and I can’t wait to race and have my family and friends and all my mates around will be awesome.

“We’ve got a great team, an inspirational team and a team that has worked really hard to get here.”

Beveridge grew up as an avid sports fan taking part in cross country, swimming, hockey and water polo before waking up in 2003 at the age of 17 to discover he was completely paralysed from the waist down. He was later diagnosed with transverse myelitis, a neurological disorder causing inflammation to his spinal cord.

In 2012, after a short stay in hospital, Beveridge fell in love with Paralympic sport, and he started competing in paratriathlon in 2013 and went on to finish ninth in the Rio Paralympics.

“I’m sure it will be a really good race between myself and Bill and I’m just pleased I’m able to challenge him a bit more than I used to be able to,” Beveridge said.

“I’m looking forward to that Games race in April. It’s going to be overwhelming to a degree.

“The fact that everything is starting to align, decisions that I made and the luck that I’ve had with the decisions that other people have made with coach Dan Atkins taking me on have all culminated in where I’m at now so it’s nice.

“Going to Rio and coming ninth, sure it was a good result but afterwards it was a strange feeling not being able to celebrate one of my team mates having won a medal because the male team is normally quite successful.

“I lost my head for a little bit and I felt partially responsible that I wasn’t more in the fight for it and it’s certainly something I want to work towards on the Gold Coast and for Tokyo if our class gets in.

“I want to be there fighting for a medal for Australia and the men’s team.”

Crowley, 38, sustained an L1-L2 incomplete spinal injury while snowboarding in Canada 12 years ago and he went on to captain the Adelaide Thunder Wheelchair basketball team in the National Wheelchair Basketball League (NWBL).

He was first named on the National Australian Men’s Wheelchair Basketball team ‘The Rollers’ in 2006 and lived and played basketball professionally in Italy in 2010.

But he took up Paratriathlon after it was included in the 2016 Paralympic Games.

“Making this team means everything. A reward for all those years and years of hard work,” Crowley said.

“It’s like when I played wheelchair basketball, triathlon is also hard work and I have to thank the support of my family.

“I played basketball for eight or nine years on the Australian squad but when I started triathlon the responsibility was all on me, not with the team, to do all the hard work and I love it.

“To come across that finish line at the Commonwealth Games will mean everything.

“Everyone on this team is giving it a go, putting in the work. It’s an elite Paratri team for a reason; everyone is putting in a lot of work.

“Look at Bill Chaffey, a five-time world champion. The man is a beast and it’s great to be in their company. I can’t wait to race on the Gold Coast.”

For Emily Tapp, the official announcement will be a just reward for perseverance after missing Rio when nominated in the athletics team and forced out when she burnt her legs.

She became a paraplegic in 2011 after a camp drafting accident in Katherine and since then, she has dedicated herself to competing in paratriathlon events and is coached in Canberra by the 2004 South African triathlon Olympian Megan Hall and expert wheelchair racing coach Fred Periac.

“Today means we are down to the pointy end and lots of hard training,” said 26-year-old Tapp.

“For me it’s the focus on the training that comes before it. It’s a big team, it’s on home soil, it’s in Australia and I know it’s going to be so exciting.”

Twenty-year-old Gold Coaster, Sarah Tait was born with Spina Bifida but her competitive spirit has seen her graduate from Wheelchair Racing and Wheelchair Basketball before switching to Paratriathlon in late 2014.

“This is absolutely everything to me,” said Tait.

“To be able to compete in my home town surrounded by people who care about me the most and I’m passionate about will be absolutely everything. I can’t wait to show Australia what it means to me.”

Completing the women’s team is 29-year-old former World Age Group Ironman silver medallist from Newcastle, Lauren Parker, who in April last year, while out training on her bike, crashed into a guardrail while traveling about 45kmh suffering broken ribs, a punctured lung, a broken scapula, broken back and a broken pelvis, leaving her with no feeling from the waist down since the accident.

But in a remarkable nine months and inspiration taken from the likes of Newcastle’s favourite son, Paralympic wheelchair legend Kurt Fearnley and unwavering support of Swansea Belmont surf lifesaving Ironman Brad Fernley, Parker is back in the saddle.

Her second-placed finishes at the Oceania Championships in St Kilda and at last week’s Paratriathlon World Cup in Devonport sees her on the Games team less than 12 months after her horrific accident.

“I didn’t expect to be racing this quickly after my accident but I’m loving it and I’m trying to learn as much as I can from each race and each training session,” Parker said.

“I’ve got so much support and a new supporter as my handler Dave “Robbo” Roberts who did great in Devonport and I’m really pleased to have him on board.

“The triathlon community and my family have been amazing. This means so much to me, I’m so excited with my results and it means the world to me to be part of the Australian Commonwealth Games team and to race on the Gold Coast.

“I certainly didn’t expect this. It will be nice to look forward to see what else I can do.”