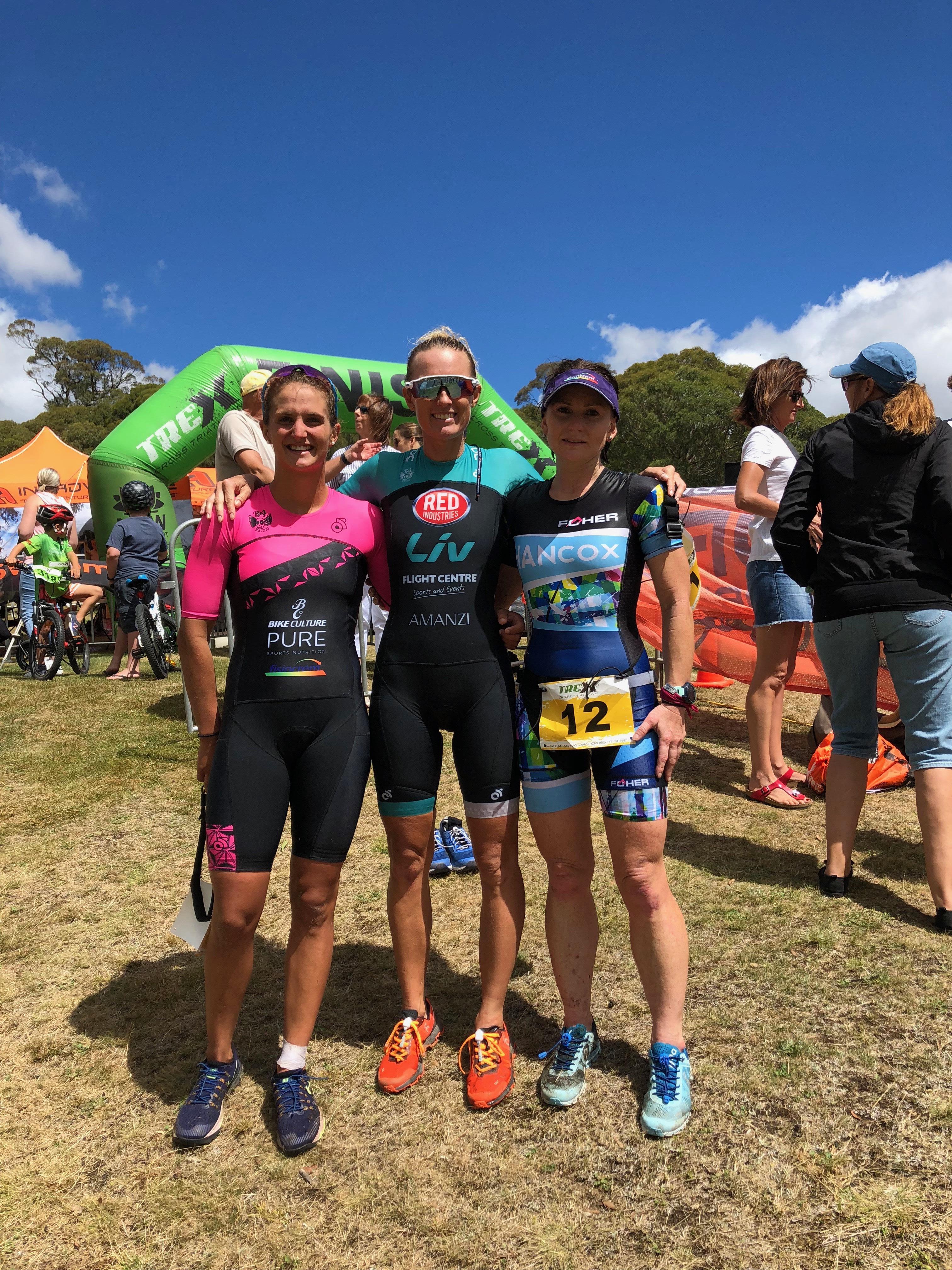 It was a cracking day for Canberra’s Penny Slater at the TreX Australian National Cross Triathlon & Aquathlon Championships at Lake Crackenback yesterday.

Slater, from the Canberra Bilbys Triathlon Club, continued her outstanding run through the elite off-road triathlon ranks, by claiming her second Australian National Cross triathlon title in a row.

Hours later she found the energy and motivation to fend off fatigue and win her first ever Australian National Aquathlon title.

Racing in the heart of Australia’s High County, and starting at an altitude of 1100m with Australia’s highest peak, Mt Kosciusko as the backdrop, the Cross Triathlon consisted of a 1,500m swim, 30km MTB and a 10km off-road trail run.

Jacqui Allen from Great Britain, but based in Wollongong, crossed the line 1 minute and 57 seconds in front of Slater after a dominant swim and controlled run to finish.

Slater, the 2017 ITU World Under 23 Cross Triathlon Champion and Aquathlon Bronze medallist, had to deal with disappointment and frustration last weekend as she collapsed within 2km of the finish line as she suffered in the heat at the Elite Energy Husky Long Course Triathlon in NSW.

“After last weekends race, I wasn’t sure what to expect. I listened to my body and took it a step at a time. My swim was solid, and I loved the mountain bike. I was able to hold my spot on the run, and was surprised at how well I had recovered from Husky”, said Slater.

“I spent the week making sure I prioritised recovery and made sure I took the time to focus on getting my body and mind ready to race rather than spending time training.

Slater has been coached by Jacqui Allen for the past two seasons, and the dividends are paying off with an 11th place elite finish at the prestigious 2017 Xterra World Triathlon Championships in Hawaii.

“It was really good to have Jacqui Allen, my coach, from the UK out in front of me, keeping me honest. It’s really special to take the national title; I love racing close to home, and I always have fun at the In2Adventure events.

“My biggest focus for the year is the Xterra World Championships in Maui, but I would also really like to win the Xterra Asia Pacific tour, after having a really successful season there last year. And of course I would love to finish my first Ironman 70.3 race.

Slater is currently studying exercise physiology and rehabilitation at the University of Canberra. She loves the perfect training conditions with the world class endurance training environment that Canberra provides.

“We are so lucky to have amazing trails in Canberra, as well as a great triathlon community. Everyone is so supportive of each other both during training and races. I feel very lucky to be part of the Triathlon ACT community.

Slater is hoping to race the ACT Aquathlon Championships on Wednesday 28th February, 6pm, at Lake Ginninderra, as long as she recovers well from her double National Championship titles this weekend.