Even before Aimee Carlin lines up with fellow Panther Tri Club member Jean King-Smith for the start of the ITU Age-Group Sprint Distance World Championships in Lausanne on Saturday, the 20-year-old Sydneysider is already a champion.

Earlier this month (August 13), Carlin was honoured with a distinguished bravery award for saving the life of a struggling swimmer caught in the surf in Mid North Coast region of New South Wales.

“We go on holidays to Tuncurry every year and I was walking my dog one afternoon and heard someone yelling out for help, I looked over and saw someone going under the water in the waves,” Carlin recounted to Triathlon NSW. “I ran down to the beach with another young male and helped pull him out of the surf and when we got closer to shore, other people helped us put him in the recovery position and wrap him in warm clothes.

“We didn’t think of it as an act of bravery whilst it happened, but more that someone had to help ‘Jai’ out of the surf.”

“It was a big surprise to get the nomination and I felt really special, as I didn’t think I deserved it all, I loved the ceremony and getting to meet the governor of NSW,” said the Penrith native, referring to NSW Governor and Royal Life Saving NSW patron, Margaret Beazley, presenting her the honour at Government House in Sydney.

“[The swimmer] contacted me after the rescue initially happened to say thank you so much,” Carlin continued. “Nothing at all like this has ever happened before and I couldn’t believe it, I always see it on the news but never thought I’d be involved in something so cool like this.” 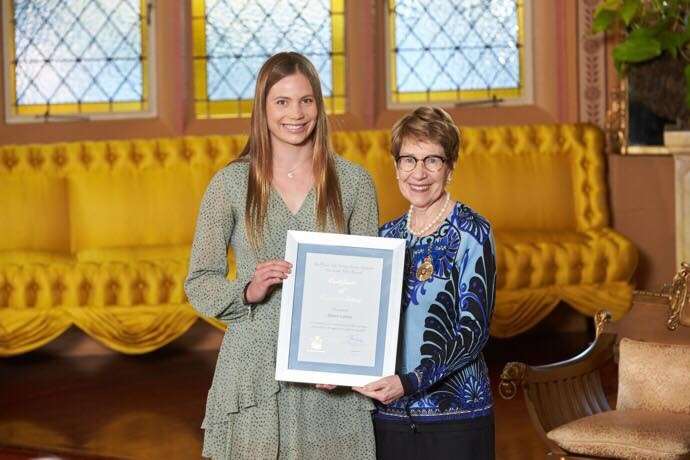 “As a club, you can only ask your athletes to represent the club with pride and give it their all. Aimee does that,” proudly stated PTC secretary Natalie Passlow in an official statement to Triathlon NSW. “The recognition she has just received for a selfless act in Tuncurry only lets the rest of the country know what we already knew.

“Aimee gives up what little spare time she has to teach children and toddlers water safety at the local swim school (Nepean Aquatic Centre) and her dedication to the sport of triathlon has meant she joins the Aussie team in Switzerland to race on the world stage in the sprint distance. Great job, Aimee! #PTCracer.

As Passlow mentioned, Carlin finds herself returning to the ITU AG Worlds just two weeks removed from the ceremony.

“This is my second Age-Group World Championships as I took a step back from ITU racing after I finished my HSC to make time for my Uni studies, but still compete at an elite level,” she explained. “Last year, I had some bad luck with injuries and illness in the [lead-up] but this year I’m hoping to do even better.

“I’ve put in a lot of hard training hours and sacrificed some things to make sure I’m ready. I’m excited about the whole experience.”

Carlin was also quick to return the gratitude to PTC.

“My tri club at Penrith is awesome,” she said emphatically. The community is very supportive and we have high-quality coaches that have helped guide us through the journey to world champs.

“I’ve been with them since I was about 11 and they have seen me grow from a beginner junior athlete to the one I am now. The races are always fun and I enjoy the training environment.”