During Club President Appreciation Week, we have been reflecting on the work of current Club Presidents across the state and showing gratitude for these awesome volunteers. We would also like to express our appreciation for all ex-presidents who left a legacy at their respective clubs.

Knowing when to step aside whilst things are going swimmingly is a skill that not many master. Ian Ross of Cronulla and Tommy Morwood of Hills have. Both recently stepped down from their positions as President whilst enjoying great success during their time in the role. A fresh voice and fresh ideas are always important, but so is paying respect to the great work that came before. 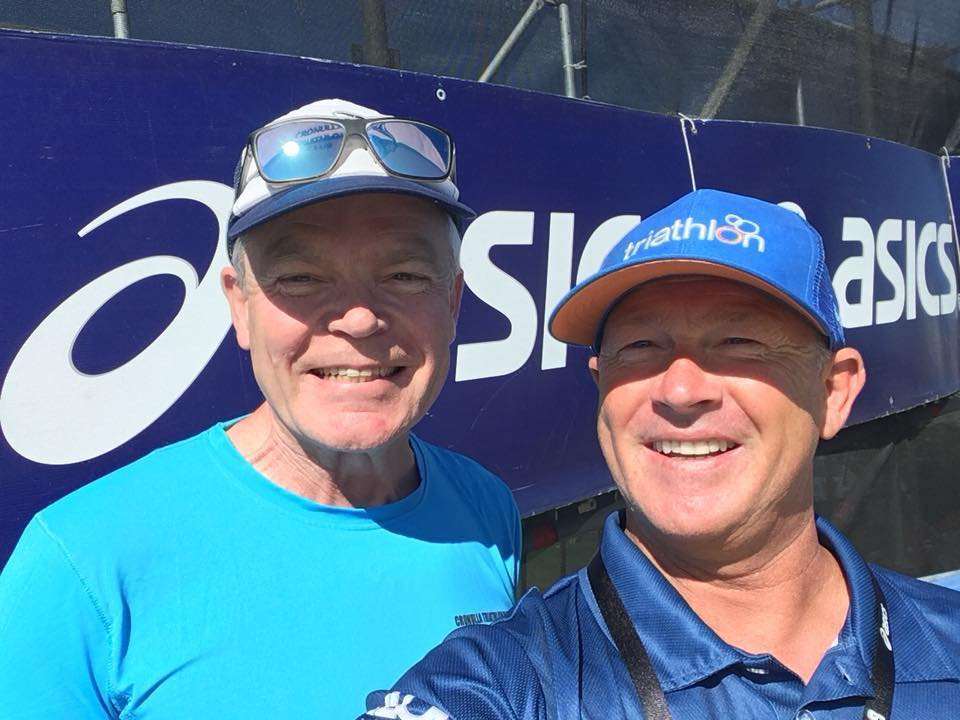 Introduce yourself & your club.

My name is Ian Ross with Cronulla Triathlon Club in Sydneys' southern suburbs (known as "The Shire").

How long did you serve as president and what were some of the highlights of your time in the role?

I served as president for six years up until 2019.

An annual highlight for me is being involved in the major charity race we host called the Richie Walker Aquathlon. It is a proud an historic event we have conducted for over 30 years in memory of our teammate Richie who passed away from heart complications whilst racing for CTC. It has become the National Aquathlon title and a qualifying race for World Aquathlon Championships a few times. It brings together the club members, families, friends, other club members and athletes and has always been a great event

One of the other highlights was Cronulla winning Club Champs in Forster a few years ago - never has so much partying been witnessed, by so many, into the small hours and the next day!

What are some of the benefits of being involved in a club committee?

In a club committee you get to make strategic changes that help the sport - we have introduced a junior program that I think is second-to-none. I implemented a Young Adults membership program where 18-24 year olds get free membership (as they are mostly students or working in lowly paid jobs) and our club lacks members that age! We look after our members - we have qualified first-aiders, we take our de-fib to every club race and external race where we have a number of athletes competing, we host regular beginner sessions and lots of other measures.

What makes your club unique?

Besides the fact that we have produced more Triathlon World Champions than any other club in the world (Greg Welch, Chris McCormack, Craig Alexander, Michellie Jones, Peter Robertson etc) we do like to remain somewhat humble. Our uniqueness probably comes from our location - these athletes and our current club members hone their skills swimming at Cronulla and the beaches and pools in the area; on our doorstep we have the Royal National Park which is great for cycling opportunities (Garie Beach hill is a killer, Waterfall hill has made more than one club member dismount and walk); and some excellent runs along the ocean front, the Royal National Park and numerous other scenic spots.

How are you staying involved in triathlon?

I am staying involved in triathlon as the Membership Officer on the CTC committee. I look after welcoming new members, encouraging them into the sport with club events and training sessions. We are all about growing the sport. Besides, I need to complete a half ironman in 2020 and again in 2021 to validate my spot in the World Ironman Championships in Hawaii in 2021 - so I certainly need to stay involved! 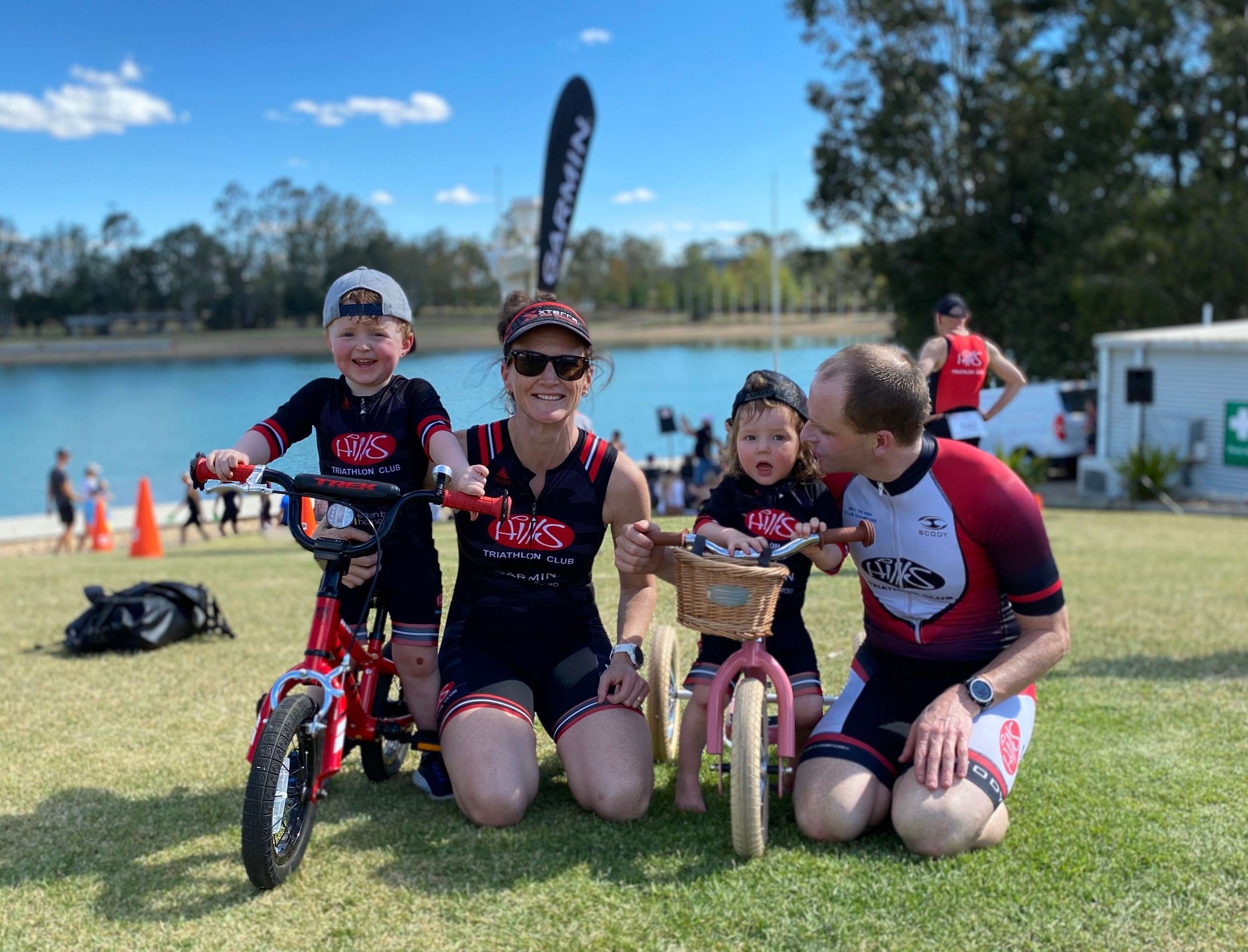 Introduce yourself & your club.

Tommy Morwood, proud member for 12 years of Hills Tri Club in Sydney. I met my wife at the Hills Tri Club 8 years ago, and now we have 2 little kids who both did their first dinky derby, in Hills uniform, a few months ago (ages 2 and 3 1/3). We love Hills at our house :-)

How long did you serve as president and what were some of the highlights of your time in the role?

I've been an active committee member holding various roles for 11 years, and was club president for 4 years (2014-2018) which actually makes me the longest serving president the clubs ever had come to think of it. The absolute highlight of my time as president was when our club won Club Champs the first time! We’d been trying hard to take the title for about 7-8 years prior, and had 4 x 2nd’s to our name, but that top spot remained elusive until the magic finally came together that first year in Orange. There's actually a video on YouTube of Andrew Reid announcing “The winner is HILLS!”; I'm on stage with Phil Dally (former TriNSW CEO) and I give him a big kiss hahaha.

It’s a real testament to all involved in the club that we’ve held onto the title for 3 years in a row now. I think we’ve got a pretty good chance of making it 4-in-a-row, taking one more when we go back to Forster in September too ;-)

What makes your club unique?

Thanks to the amazing work of all the clubs volunteers, Hills Tri club puts on the largest club race series in Australia! We host 6-7 event, with races capped at 300. That’s over 2000 race stars a season – wow. The Hills Tri Series offers incredible value: it's the full sprint & enticer distance race experience that you expect from all the big event companies (electronic timing, race numbers/stickers, post race food, photographers, TO’s, commentators, loud music pumping etc), however it all comes with a with a very unique supportive feel. After the race, we’ve never given medals or recognition for podiums, rather, we give away HEAPS of prizes from sponsors as lucky door’s to the crowd. Everyone really enjoys it as there is no pressure, it's a really safe, friendly environment.

The series has built up so much over the years, that it's an amazing place for new people to the sport to come and experience their first tri as well, which has in turn seen the club experience really big membership growth - over 400 in recent years. No surprise really - us triathletes all loooove to race.

The club is also extremely supportive of juniors, with separate waves and distances for all the kids each race day, grants given to juniors to assist with national/world champs, free bikes, uniform subsidies and a host of exceptional coaching staff that operate in tandem with the club.

What are some of the benefits of being involved in a club committee?

Everyone who’s ever done any volunteer role knows, it’s very satisfying to give back to the sport. Lots of people do it in many different ways - club committees, TO’s, volunteers. Whatever the role, I'd strongly encourage everyone to get involved in some way.

During my time at Hills, we initiated a police to actually reward all out committee members as well - they all get to race for free at our events. So right there, across 6 events it's worth $300 for your time (only a few hours a month!). The desire to volunteer at Hills is in our DNA: each event there's over 30 register volunteers, plus an array for others that just help out on the fly. It's really amazing the culture that’s been built up over the past 25 years. I'm so proud to be part of it.

One of the things I found was that people often wanted to help in some way, however are scared off by the amount of time they might need to give - we’ve all seen the core committee members who give hours each week to making things work, and of course that not for everyone. So we had a huge array of small jobs that people could put their hands up for as well. I used to have a team on race day do all sorts of things: One person had to cut oranges, one person had to put up bunting around transition, someone else just had to run out to the turn maker and put down a cone. one person came and just put up the flags. It's all help that was greatly appreciated by everyone, most of all the people actually doing the jobs as they were proudly part of the clubs race team now.

How are you staying involved in triathlon?

There were so many amazing people at the club, that when I saw there was a solid succession plan in place, I was more than happy to pass on the top job and take a step back. It's a real testament to everyone that the club that it continues to grow. Race numbers are flourishing, 2 more club champs titles, new sponsors.

I still love being involved in the sport, however I’m very conscious of ‘stepping on other people’s toes’ now. So I was very fortunate and humbled to be nominated, then get elected to the NSW board of Directors. It’s a whole new level of triathlon administration, and once more I get to work along side an incredibly talented group on people as we look to support the sport as a whole. We do work that helps shape triathlon in NSW, as well as contribute to the sport nationally. It’s very rewarding and something I truly enjoy.

I’m also still actively racing. I’ve been to world champs 6 times now, and I was all geared up for the sprint world champs in Canada come August. It doesn’t look too good that that will go ahead though at this stage given the current CV-19 crisis, so I’ve adjusted my focus now to Townsville 2021. I’m really excited for that event - I loooove off road racing! I actually do a bit of work commentating for XTERRA as well. The past 5 years I’ve been in Maui for the Xterra world champs as part of the commentary team. Now that’s really cool - I get to do all the pre race Q&A’s with the pros, help intrude everyone at the welcome diners, put on daily videos to the athletes, mix with the sponsors, and of course come race day I’m on the mic for 8 hours - It's defiantly the highlight of my year! 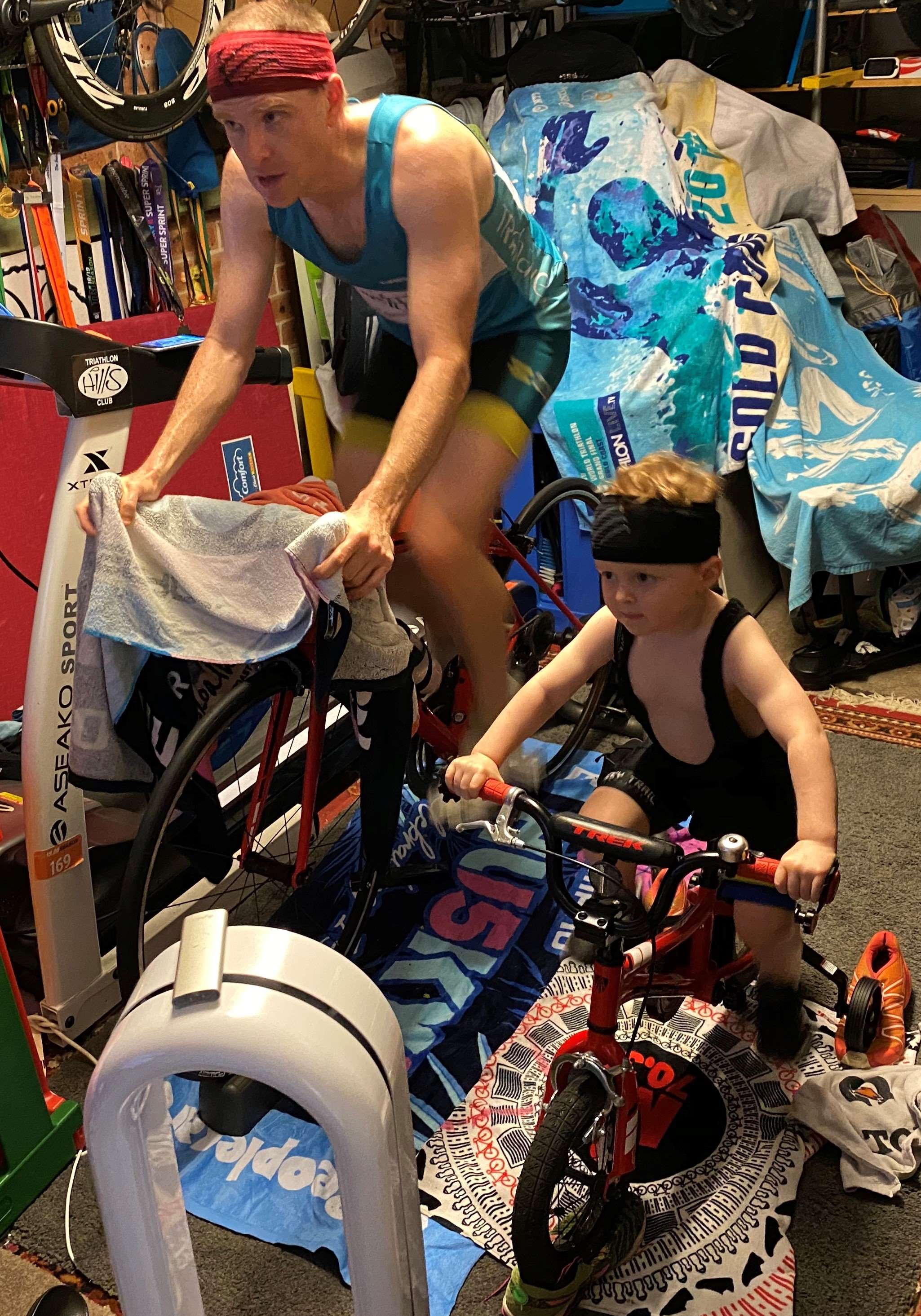 How are you keeping fit these days with the CV-19 crisis?

I’m pretty lucky in that 90% of all my training is already done in my man cave at home. I’ve got a treadmill and a wind trainer, so there’s really no change apart from now being able to focus more on my ZWIFT racing given all the pools are closed. My 3 ½ year old love to ride next to me too which is awesome.

The real challenge I’ve found has been trying to stay motivated. Imp someone who needs constant goals so with the races all cancelled I really find it hard to do anything – there’s nothing to work towards. I’m lucky that a friend of mine reached out and encouraged me to join a ZWIFT racing league. It’s run by a QLD coaching team up in QLD, KOA Sports. It a free weekly private league that runs over a full season. Basically, it’s like your regular ZWIFT events, but it’s a private league that’s run over a full season. As far as I’m aware, its the only of the only private league in all of Australia. There are over 350 people racing, and it’s free – interested to join? >  https://www.koasportsleague.com/ What make it even cooler, is that they give away prizes, have ABCD grades, race all season and all the races are streamed lived with commentators too. 19,000 views last week, wow. Come join the fun! It should keep me motivated through winter for sure.

Thank you Tommy & Ian for your reflections and thank you for your awesome work as presidents.