Talking to age group paratriathlete Shayne Allen, you can’t help but be inspired. The 41 year old has encountered many obstacles in his long and varied sporting career, and yet still manages to brave each challenge with determination and grit. Perhaps it is best summed up in his advice for aspiring paratriathletes: “Just give it a go.”

Allen has definitely given it a go in his lifetime, but not just in triathlon. Born with a rare and genetic eye condition called retinitis pigmentosa that causes slow degeneration in vision, he made a name for himself in high school as a star track and field athlete, particularly in shot put. The first disabled athlete to compete in the able-bodied division at the Pacific School Games, in 1996, Allen went on to compete at the World Championships in 1998, and then the “best games ever”, the Sydney 2000 Paralympic Games.

Even now, Allen still gets goose bumps thinking about the Games: “It was such an intensely positive and fun atmosphere. When I walked out into that stadium and they said my name and my home country… can you imagine that? It was one of the highlights of my life.” 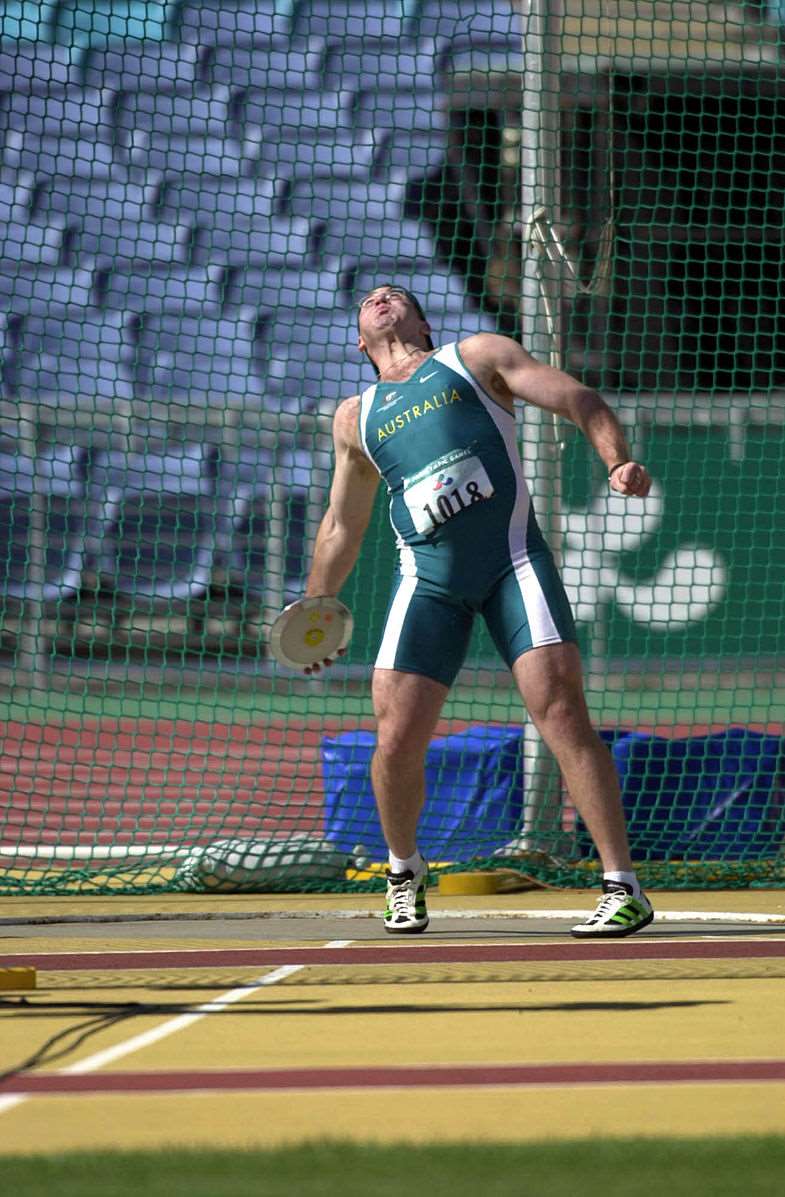 Landing a respectable eighth place in the shot put and sixth in his preferred event, discus, Allen continued competing in national and international events after Sydney, and was on the training squad for the 2004 Athens Olympics when a falling out with his coach made him “fall out of love with athletics”.

Returning his focus to a burgeoning corporate career, Allen dabbled in long distance running to stay active, but it wasn’t until he unearthed a tandem bike while moving to the Central Coast that he really got moving again. In fact, it wasn’t just any tandem bike, but a gift from his late uncle, the legendary Ched Towns.

Towns – who also suffered from retinitis pigmentosa – was the first Australian triathlete with a physical disability to compete in the Hawaiian Ironman, and in his lifetime competed in more than 200 triathlons and eight Ironmans. A profound inspiration to his nephew, Towns passed away in early 2000 while on a training climb in Nepal, preparing for a summit of Everest.

“[The bike] really changed my life,” says Allen. “It really pushed me into the next part of my sporting career.” So too did Allen’s new neighbour, Roger, who just happened to be an avid cyclist and offered to jump on the front of the tandem to guide Allen. When they first limbered up for a 15km ride, Allen “thought it was going to kill [him].”

With time and training, Allen soon became a serious contender at national paracycling events, eventually culminating in a Paralympic Trials event for the Rio 2018 paracycling team. After a second place finish in the tandem cycling time trial, Allen thought they were a shoe-in for the Paralympic team. But the politics of elite sport once again belied him, with Allen and his guide Dan being passed over for the first and third place finishers on the day. “We just lost a lot of interest after that,” explains Allen. “The politics… were again similar to what I had experienced in athletics.”

Growing up in the shadow of his uncle Ched, it seemed inevitable that Allen should attempt triathlon himself, and after a year of training, the time finally arrived in September 2018 at the Sunshine Coast 70.3. Recalling his first experience at a triathlon event, Allen is reminded of Sydney 2000. “The early morning start, lining up on the beach… and the paras always go behind the pros, so there’s a fair bit of focus on you. You hear your name again, and the crowd’s going crazy… it brought back that feeling from when I entered the stadium in 2000, and the hype and the angst, and ‘am I going to be able to do this?’”

With his now trademark grit and strength, Allen – together with his guide Crawford Moules – powered through his swim and bike legs, and despite a debilitating leg cramp on the run leg, slipped just under his goal of six hours by mere seconds.

“It was the hardest, but one of the most fun things I’ve ever done in my life. And addictive! We right then and there concluded we would come back the next year to try and go even faster,” recalls Allen.

Twelve months later, Allen and Moules lined up on the sand on Mooloolaba Beach again, finishing in a new personal best of 5:38, shortly followed by a new record at Western Sydney 70.3 later that year of just over 5:30. “I just love that course,” Allen says, of Western Sydney. “Such a nostalgic place for me, because that’s where my uncle lived and where I was born… a real hometown feeling for me.” 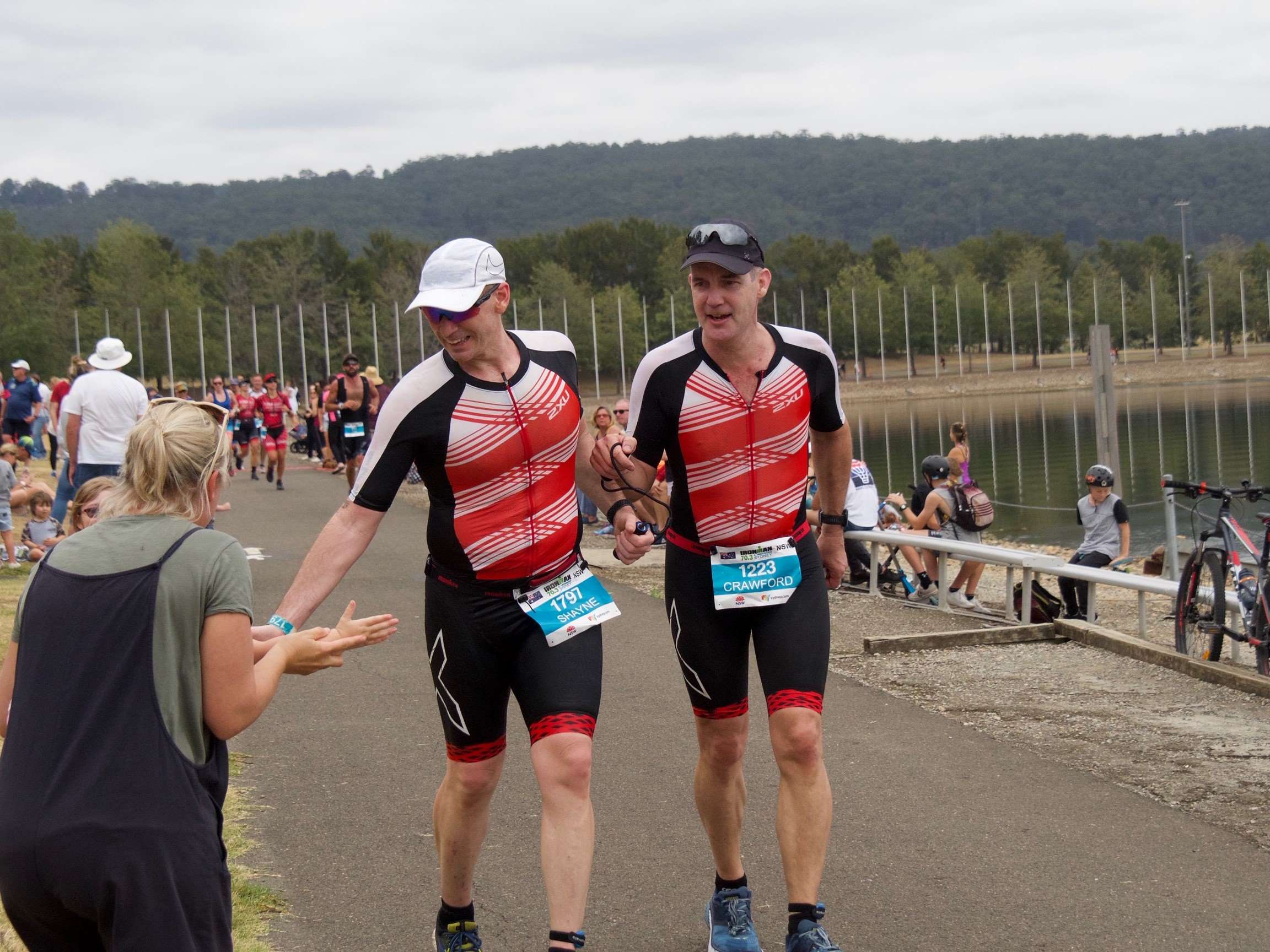 With a newfound love for long-course racing, Allen was due to run his first marathon this year at none other than the iconic New York Marathon, after winning a place through the charity running group, Achilles Australia. While it’s still on the cards for whenever international travel resumes, in the meantime Allen dreams of landing a coveted paratriathlete slot for Kona and following in his uncle Ched’s footsteps: “My hat is in the ring,” he says. “If I can jump in the lottery and get a spot for Hawaii, that would be pretty cool.”

Triathlon has given Allen a focus and passion in life, one which he wants to share with other budding triathletes, whether disabled or able-bodied: “Triathlon is such a welcoming, inspiring and family-oriented community, whether it be at the grassroots level or right through to the elite level. Everyone seems to say ‘have a go’. You don’t need to be the best, you don’t need to have the best equipment, you don’t even need to finish. You’ve just got to give it a go.”

Wise words from a weekend warrior who continues the family legacy left by his uncle Ched, and who will surely inspire more athletes to come.