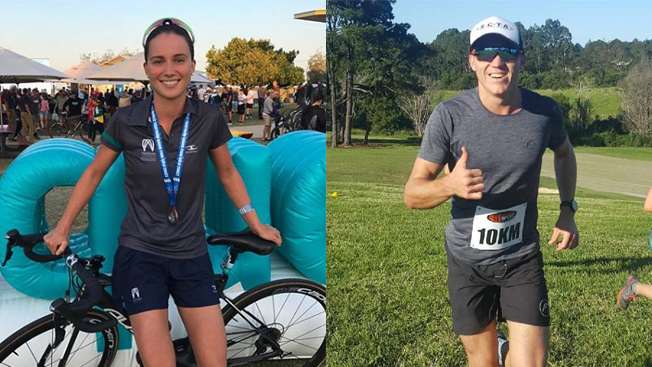 Garth Prowd OAM, affectionately known as the ‘Godfather’ of triathlon in Australia, was recognised as a passionate advocate for sports tourism in Queensland, and a globally respected events manager. He tragically passed away in 2017, but his legacy lives on. The Prowd family, in partnership with Noosa Triathlon, have created the Garth Prowd Triathlon Scholarship, in hopes of unearthing a future Olympic medallist.

The scholarship provides an ongoing legacy program for two Australian triathletes, one male and one female, between 15-23 years of age. This year’s recipients, Brianna Thomas (Warwick Dalziel Triathlon Coaching) and Jake Hynes (Sunshine Coast Tri Academy (SCTA)) are both from Queensland and will receive a list of benefits that will not only support their triathlon endeavours, but also their business acumen, which Garth was passionate about.

The scholarship includes sponsorships from ASICS and CANNIBAL, management and media training, mentoring and race advice from previous Noosa Triathlon Champions Emma Carney, Emma Frodeno, and Courtney Atkinson, entries into the 2019 Mooloolaba and Noosa Triathlons, and a range of other support and professional opportunities.

Brianna Thomas is somewhat of a new triathlete, only having started her triathlon career at the end of 2017. Her past experience was in running, and while it has been a big change transitioning into triathlon, she says the support that she has received has been fantastic.

“I was given what they call a ‘talent transfer’ opportunity from Triathlon Australia; I was contacted by Justin Drew, the National Performance Director, and I ended up being coached by Warwick Dalziel. It’s been a whirlwind of a year, but I’ve learned a lot, and I’ve had a great introduction to the sport.”

“Mentally, triathlon is very different to my past experience in running. The mental aspect of doing three training sessions in a day instead of one was definitely tough. Rather than being done by 8am, I’ll be training until midday, and then have to be ready to go again by 5pm. In terms of racing, it was a real process to mentally prepare for a triathlon. You have to think about so many things at once, which is different to the simplicity of running. Luckily, I have a great support system; I’ve had loads of great mentors from the sport, and my partner is also a triathlete, so this has really helped me transition smoothly into becoming a triathlete myself.”

“I also love how the sport is so diverse and how every day is different. I was comfortable with running day in and day out, but now I feel like I’m being challenged a lot more. I’m excited to see how the Garth Prowd Triathlon Scholarship can help me grow into a stronger triathlete, ” said Brianna.

Jake Hynes is no stranger to receiving triathlon scholarships, as he won the Sunshine Coast Tri Academy Junior Scholarship last season. Toby Coote, Jake’s coach at SCTA, hopes that the Garth Prowd Triathlon Scholarship will help Jake develop as an Under-23 athlete.

“It’s fantastic that Jake has access to more sponsorship opportunities, because it will build upon what he’s already learned this year with his SCTA scholarship,” said Toby.

“Garth actually sponsored me when I was younger. One of the great things about this kind of support is that it’s not limited just to racing opportunities. There’s loads of avenues, like coaching or commentating that can be explored as well, so there’s no end to what Jake can pursue because of Garth’s family’s contribution to the sport.”

Jake was extremely excited to win the scholarship. As he transitioning to Under-23 racing, he is particularly looking forward to the experience of draft legal racing at Mooloolaba Triathlon. Unfortunately a shin injury prevented him from completing Noosa this year, so he is working hard with his team at SCTA to get back into consistent training and rehab to get back on track for next year.

“I am looking forward to working with the mentors, Emma, Emma and Courtney, to help me develop my social media platform and use their guidance to grow my presence in the public eye,” said Jake.

Joy Prowd is Garth’s wife, and worked alongside him at USM Events from 2000 until her retirement in 2013. Whether they become professional triathletes or not, she is happy that Brianna and Jake have the opportunity to take advantage of the sponsorship and mentor opportunities that the scholarship provides.

“I got the chance to speak to both Jake and Brianna after they won on Sunday, and both of them were very excited to have won. I know that Jake is a local athlete, so I was very excited to see him win,” said Joy.

She went on to say, “The scholarship is really a fantastic opportunity for up and coming triathletes to see what it is like to live the life of a professional, so I hope Jake and Brianna both make the most of their time over the next year.”

One of last year’s scholarship recipients, Joanne Miller from Sheldon Triathlon Club, definitely made the most of her time and resources she won. This was evident in her 2018 Noosa result, as she managed to knock over four minutes off her 2017 time.

“When I first received the scholarship, I found that the mentors had a huge impact on me; being able to talk to them, as well as M5 Management, was an invaluable resource. Access to sponsors like ASICS and CANNIBAL was incredibly helpful, as their support helped me get access to great gear to help me improve.”

Her advice to Brianna and Jake?

“Make the most of the sponsors and management.”

“Garth’s scholarship gives a great insight into what the life of an elite triathlete is really like. With access to media and sponsorship opportunities, Brianna and Jake would be smart to make the most of it. It’s a fantastic honour to receive the scholarship under Garth’s name, because he was so influential to our sport, and has left a legacy that helps support upcoming triathletes like us,” said Joanne.

We look forward to following Brianna and Jake throughout the 2019 season and wish them and their coaches all the best and thank Joy and the Prowd family for their support of IRONMAN and triathlon in Queensland.