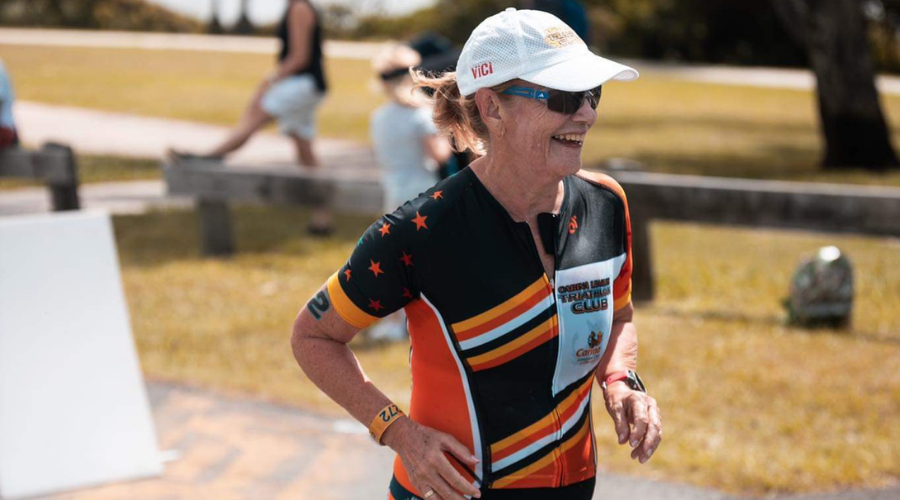 Ever wondered how someone goes from a random decision of buying a bike, all the way to having competed on the Australian Age Group triathlon team at eight World Championships?

Catharina ‘Kitty’ Hamilton’s fascinating story began after she decided to purchase a bike on a completely spur of the moment decision 25 years ago. Never did she think that this moment would spark a love for the sport of triathlon and an incredible journey which has seen her compete all over the world for her country even including venturing back to her home country of the Netherlands!

Kitty fell in love with the sport and, prior to retirement, learnt how to juggle her training schedule while working full time and being a mum. Her initial attraction to the sport was due to the diverse nature of triathlon and the opportunity to learn and progress in not just one, but three disciplines.

After having a fanciful idea of making the Australian Age Group team for the Vancouver 2008 World Championships, Kitty decided to join her local triathlon club, Carina Leagues Triathlon Club (CLTC) with the key motivation behind this decision being to train with others and have coaching to improve her abilities. This one decision changed Kitty’s last 15 years, where she has become immersed in the club’s identity and has even become a life member of the club.

Not only did Kitty reach her goal of making the 2008 team where she placed 30th, but she has gone on to tackle some challenging races at other World Championships events. This included Auckland 2012, where bikes were racked in the pelting rain and some swimmers were told to turn around before making the last buoy due to the strong current.

However, Kitty’s most memorable race was being able to compete in her home country of the Netherlands at the 2017 World Championships in Rotterdam. Her family – two daughters and their husbands and three grandchildren – travelled across the world and watched her cross the finish line. It was a very special moment for the family and one they will all never forget. To top off this adventure, Kitty and her family visited the place where Kitty was born.

The lessons that triathlon has taught Kitty have been applied to multiple aspects of her life. Without question, this is something that many others who are involved in the sport can also resonate with. These lessons have included understanding the value of all the small pieces that go together to make the whole picture. From the routine of packing a training bag the night before, to being familiar with the course before an upcoming event and every other little detail can make a big difference to the overall enjoyment and success in both triathlon and in life.

Her biggest advice to those wanting to make the most of their triathlon journey (no matter if they are a beginner or experienced triathlete), is to be involved in a club with likeminded people who are passionate about the sport of triathlon. Her second piece of advice is to be consistent with your training and just commit to turning up for each session at your club.

Catharina ‘Kitty’ Hamilton will be out in force at the Mooloolaba Triathlon in March, so keep an eye out and make sure to give her a cheer if you see her on course!