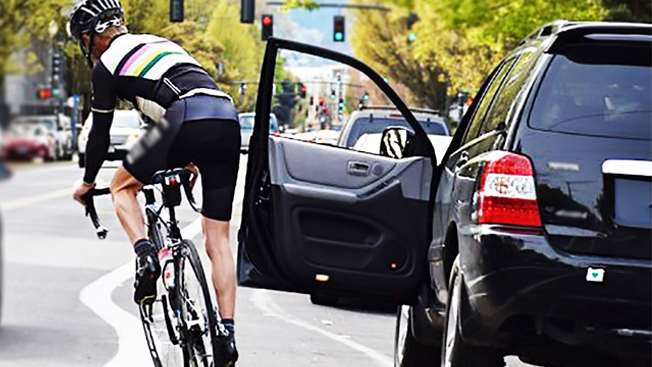 One of the many hazards for cyclists is collision with an opened car door, otherwise known as “dooring”. As the number of cyclists on Australian roads increases, it’s important that everyone is aware that the consequences of a dooring incident can be serious, resulting in injury, damage to your bike, or worse.

So, what happens if you’ve been involved in a dooring accident? Firstly, your safety is a priority, so get yourself (or anyone else) and your bike off the road. If you require serious medical attention call 000, or ask someone else to. If your injuries seem only minor, it’s still a good idea to go see a doctor or get to the hospital to get checked over.

Irrespective of how serious the incident is, it is important to get as much information as you can about the incident, the damage caused and the people involved. Even if your injuries seem minor and there’s no property damage, collecting these details are essential if you decide to lodge a property damage claim or compensation claim later down the track

You should obtain the following information from the person who doored you, whether they are a passenger or the driver:
• Name
• Address
• Contact details
• Driver’s licence number
• Car registration and insurance details.

If there are witnesses, you should also their contact details too as this can become critical in proving who was at fault for the accident. You should also make notes of the accident time, location and any other information that might be relevant later. Make sure the incident is reported to the police and ask for the police report number.

If you can, while on the scene, take photographs of both the damage to the vehicle and your bicycle and any injuries. Finally, you should also get a quote to repair any damage to your bike.

To prevent dooring incidents, drivers and passengers should get into the habit of using the mirrors and shoulder-checking for cyclists before opening the door. One such method is called the Dutch Reach (named for its origin in one of the world’s most cyclist-friendly nations). Simply open your car door using the hand that’s furthest from the door. That is, if you’re the driver, use your left hand. In doing this, your body naturally rotates towards the door, giving you an extra chance to check whether cyclists are coming.

While the onus of dooring accidents is on the drivers and passengers of vehicles, as a cyclist you need to stay vigilant about your safety as a vulnerable road user. This is especially important around busy areas, like shopping strips and schools.

If you’ve been involved in a dooring incident and you want to lodge a claim for property damage or compensation, legal advice can guide you through what might prove to be a complex and unfamiliar process. You may even be able to claim if you sustain injuries as a result of having to swerve to miss a car door that is opened in front of you.

As a Triathlon Queensland member, you are entitled to a free consultation with a specialist road injury lawyer from Maurice Blackburn and initial advice for property damage claims. It will cost you nothing to find out where you stand and what your next steps might be. We recommend that you seek legal advice even if you are eligible to claim under Triathlon Queensland’s insurance policy as this may not cover everything you are entitled to.