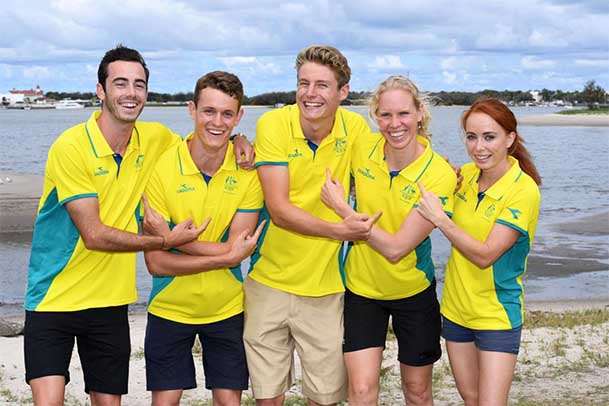 "I don't think I'll ever stop pinching myself"  Gillian Backhouse was grinning ear to ear as her place on the team for next year's Commonwealth Games team was confirmed today.

Joining her on the team are Jake Birtwhistle, Charlotte McShane, and fellow Queenslanders Ashleigh Gentle, Luke Willian and Matt Hauser.

Two paratriathletes have already secured nominations  (Emily Tapp and Bill Chaffey), with the team not being confirmed until Feburary 2018.

The young team named today already have an impressive resume.  Birtwhistle, Hauser, McShane and Gentle have already won the Mixed Team Relay world championship this year.  Willian won his first world cup race in Mooloolaba this year and missed the automatic qualification by seconds on the Gold Coast.  In September, Backhouse won a World Cup race in the Czech Republic by over a minute.

The inclusion of so many athletes who have progressed through junior pathways in Queensland is a testament to the quality work being done locally by Triathlon Queensland's development programs, coaches, clubs, race directors.  For NSW born Backhouse, moving to a strong triathlon environment in Queensland after finishing high school gave her the opportunity to focus on developing her skills as a triathlete while studying at university.

Each of our athletes have raced over the course at the Gold Coast WTS race earlier this year.  Hauser doesn't believe being a local will give any advantage "at the end it is whoever has the mental capacity to push through and make your country proud".