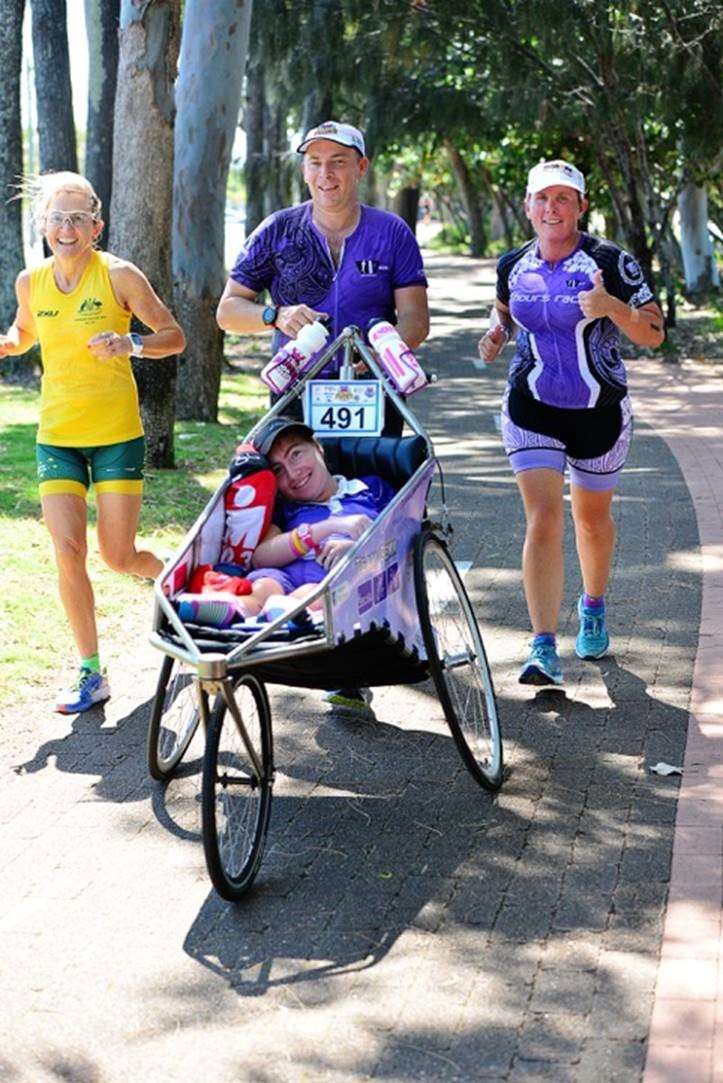 Gemma Weinheimer, from Maryborough, Queensland is not your average 22-year-old athlete.  Gemma was born with cerebral palsy, which has left her with restricted mobility – only able to use her right arm.  Although Gemma faces daily of challenges and requires around the clock care, she has managed to become an inspirational figure in our triathlon community, proving that with the determination of a loving family and the camaraderie and sense of community found in sport, anything is possible.

In 2011, Gemma completed her first triathlon at the Noosa Special Tri with the aid of her parents, Phil and Sam Weinheimer.  In order to participate, Phil not only had to learn how to swim, but also how to tow a boat behind him.  The task was difficult, but worth it - that feeling when he and Gemma crossed the finish line was one of support and inclusion, which left a smile ear to ear across Gemma’s face.

Since then,  Team Gemm as they have become known, have completed roughly 40 triathlons, 15 fun runs, 2 Sunshine Coast 70.3’s (run leg only), 2 Hervey Bay 100s and 3 Gold Coast Marathons.  The sheer volume of races is quite the accomplishment, even for an able-bodied athlete.

Aside from the obvious physical strain Sam and Phil put themselves through to get Gemma across the finish line, there have been other challenges in their journey.  Like any triathlete, there were initial equipment costs.  But for Team Gemm there were additional costs, such as the boat Gemma sits in during the swim portion, and Gemma’s custom running chair.

The barriers between Team Gemm and the start line become more complex in actual race selection.  Team Gemm must carefully chose which races they can compete in based on various logistics such as the terrain of the race course and the temperature.  They must also consider how Gemma’s body will be able to hold up in the elements.  Though they have completed 2 Sunshine Coast 70.3 races, Gemma has only participated in the run leg, due to the rough water conditions of the swim, and the hilly bike course.  Phil has said that they would love to complete all three legs of a 70.3 with Gemma or perhaps a full Ironman one day, however the events on the Eastern coast of Australia where they are located are just not suited for Gemma’s needs.

Team Gemm were faced with another barrier upon entering their first Gold Coast Marathon, as their request was immediately denied due to ‘rules and safety regulations’.  However, they did not give up and approval to enter the able-bodied race of the Gold Coast Marathon took an additional 11 months.  Team Gemm succeeded and entered the 2014 race, where Gemma was the only wheel chair athlete present in the able-bodied race.  Team Gemm paved the way for other wheel chair athletes to enter the race and since then, there has been a steady increase in the number of participants.  Though there are still stipulations based on safety regulations, such as they must start at the very back of the pack, they are happy to be able to participate.

Not only has Gemma fallen in love with the sport of Triathlon, but both Phil and Sam have individually become involved.  Aside from completing events with Gemma, Phil and Sam have individual goals, and will be competing in Taupo 70.3 later this year, with hopes to complete their first full Ironman in New Zealand next March.  Phil says that the Triathlon community have shown nothing but support and inclusion for Team Gemm, and are over overwhelmed by the way Gemma has been accepted amongst the able-bodied athletes.

This year, Team Gemm looks forward to three major races.  They will compete in this weekend’s Gold Coast Marathon, the Sunshine Coast 70.3 and the Hervey Bay 100 later this year.

When reflecting on Team Gemm’s triathlon journey, Phil says that it has been incredible to give Gemma the chance to compete alongside able-bodied athletes, as it was something they never dreamed possible, and they are grateful to the triathlon community for welcoming and accepting Gemma as an individual.

Over the past six years there have been several memorable moments for Team Gemm, one being their first Sunshine Coast 70.3.  Phil remembers the remarkable atmosphere and the feeling of running down the red carpet through the Ironman finisher’s chute.  Gemma has become so accustomed to the sound of commentator Pete Murray’s voice that she associates his voice with the excitement surrounding the finish line, and becomes thrilled as soon as she can hear him.

But perhaps one of the most notable moment of their triathlon journey was during the 2016 Hervey Bay 100, where Paralympic athlete, Katie Kelly joined Team Gemm.  Kelly completed the swim leg with her guide and then ran alongside Team Gemm for the majority of the run leg, crossing the finish line together, as one united team.

Though Gemma has limited speech, she says hello to many of the competitors who find themselves travelling alongside.   She may not be able to tell you herself, but it is obvious that she loves competing.  The smile which covers Gemma’s face when she hears the spectators cheering her name says it all.  Phil and Sam want to give Gemma every opportunity to experience life, and the sport of triathlon is helping to make that happen.

Team Gemm have been nominated to carry the Queen’s Baton for the 2018 Commonwealth Games.  They will hear within the next few months if they are successful.