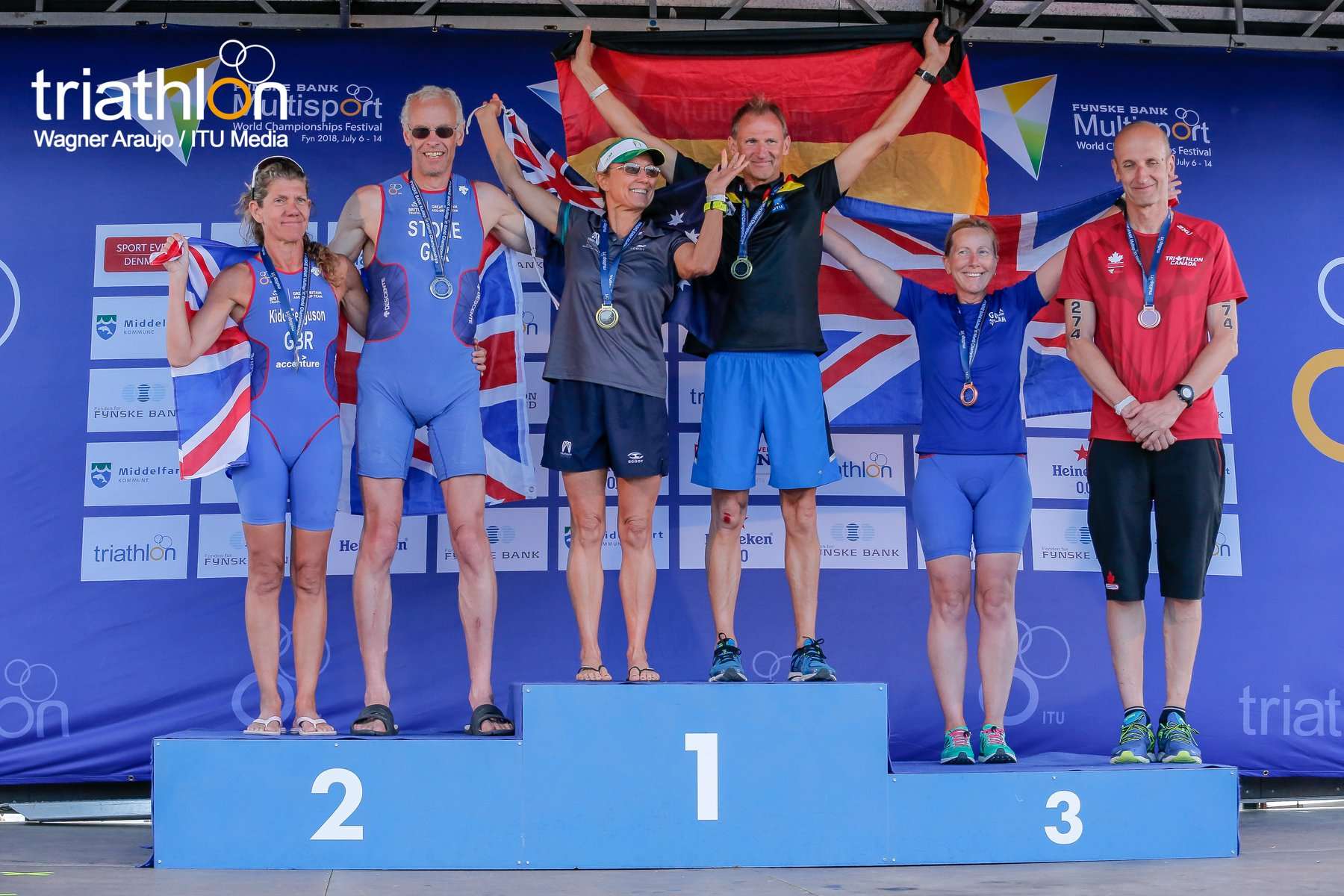 Penny Palfrey is one of the most decorated and respected open water swimmers around the world. Penny first represented England in the pool as a teen and went on to represent Australia as an open water swimmer. In 2011, Penny swam 108km from Little Cayman Island to Grand Cayman Island in a time of 40 hours and 41 minutes. This was a world record for the longest unassisted ocean swim. In 2015 Penny decided to try her first triathlon, now five years later she is the World Aquathlon Champion in the 55 to 59 years age group. We caught up with Penny after her recent win in Fyn, Denmark.

How did your race in Fyn pan out, did it go the way you expected?

We had a mid afternoon deep water start. The air temp was unexpectedly warm at 26C. The water cool at 17C, and thick with stinging jellyfish. My wave had all the 40+ women start together. And that turned out to be a lot of women. With the stronger swimmers vying for a place at the front, and the others hot on our heals it was a little crazy heading out to the first buoy. After that I found some clear water and could get into my race. I exited the water first in my age group in 13:29. My transition was quick and clean, in 1:07. I'm very happy with my run split  (24:10), though my run didn't feel easy. Even though we come from Queensland, I felt the heat. Perhaps because we've been training to prepare for expected cool conditions.  Overall I'm very happy with my result.

How did you prepare for this race/what type of training were you doing?

I've been training between 14 and 20 hours per week. We don't have a pool where we live so all my swimming is done in open water. My swim milage has dropped dramatically from my marathon swimming days, I try to hold around 16k per week. This year we joined with running coach Gerry Maguire from Townsville. He's picked up my run milage and gives me purposeful, quality run sessions. I'm beginning to see the benefits of the hard work.

When did you start doing triathlons and Aquathlons?

Five years ago Chris and I moved from Townsville to a small town on the Central Queensland coast, where they have an annual triathlon. I decided to enter the Come 'n' Tri event. 350 swim, 10k bike, 2.5k run. I smashed the swim, did the 10k cycle on a mountain bike, and walk/jogged the run. It wasn't pretty but it was fun. So then we did some more.

How did you make the switch from marathon swimming and was it an easy switch?

It was a combination of things that lead to the switch. I guess it was time in our lives for a change. Triathlon was a completely new sport to me and apart from the swim I was starting from the beginning. I still have my L plates on for the bike, and run like a swimmer. But I'm enjoying the new challenges, destinations and friends.

Will you return to Marathon Swimming one day?

Perhaps, I'm not sure. I still enjoy open water swimming, but I don't think I'll be attempting any more ultra distances.

What’s next, will you return to Australia or have a little holiday before coming home?

We have an exciting holiday planned. Beginning with three days in Copenhagen, then we fly to Amsterdam where we meet with an Australian cycle tour company. We're cycling from Amsterdam to Paris, arriving the day before the finish of the Tour de France with a spot to watch the race finish in Paris!

What are your season plans? Do you have any more races coming up soon?

Yes, I've qualified for the standard distance triathlon at the World Championships on the Gold Coast in September.