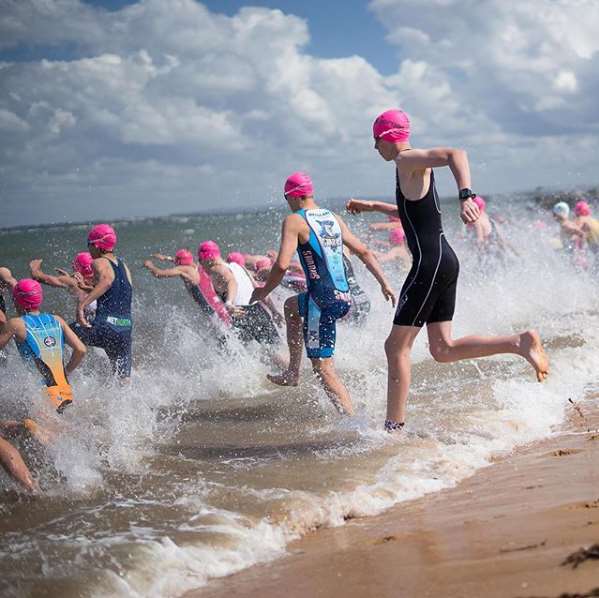 Triathlon Australia and The Event Crew announce the inclusion of the Oceania Triathlon Union (OTU) Oceania Championships within the Moreton Bay Triathlon Festival on Sunday 14 April 2019, bringing the region’s best triathletes to Moreton Bay.
This championship event is a standard distance draft legal race and carries qualifying points towards the Olympics in Tokyo in 2020. This event forms part of the Oceania Standard Distance Championships and the Australian U23 series.
The Event Crew’s General Manager Brendon Downey commented “The Event Crew is excited to include this elite race to our schedule of events at Moreton Bay. It’s a fantastic opportunity for the local community to see some of the world’s best athletes in action. Locals can also get involved themselves with a range of event distances and age categories on offer.”
National Events and Technical Manager Lukas Matys considers the Oceania Standard Distance Championship as one of the most important events for our elite athletes on the domestic calendar.
“The race offers our athletes the opportunity to earn valuable points during the Olympic qualification period, with the points on offer at Moreton Bay almost on par with an ITU World Cup race,” said Matys.
“With this kind of status attached to the event it is important we work with an experienced event delivery partner in The Event Crew capable of staging a world class event.
“The event is ideally placed in mid-April, and together with Gold Coast Triathlon – Luke Harrop OTU Continental Cup it creates a great double weekend of racing, combining the age group and performance athletes competing together, which is one of the unique aspects of triathlon,” he added.
Moreton Bay Regional Council’s spokesperson for sport Cr Koliana Winchester said the Council had been strategically investing in sporting infrastructure to attract major competitions.
“Locals will certainly make the athletes and their supporters feel welcome, we love hosting major events here in Moreton Bay” she said.
“The Oceania Triathlon Union Oceania Championships here is a major addition to an already massive sporting calendar in 2019.”
Events like this aren’t just a great economic injection into our region, they also inject a real sense of vibrancy and excitement.”

The 2019 Moreton Bay Triathlon is held at Pelican Park, Hornibrook Esplanade, Clontarf on Sunday 14 April 2019. This will be round 16 on the Nissan State Series calendar and is a Queensland Standard Distance Championship where the last of the series points are up for grabs and includes the 2018/19 announcement of the Champions of Queensland Awards. This event is just around the corner leaving athletes with only weeks to prepare.

Entries are open to anyone willing to give triathlon a go. For more information go to www.moretonbaytri.com.au