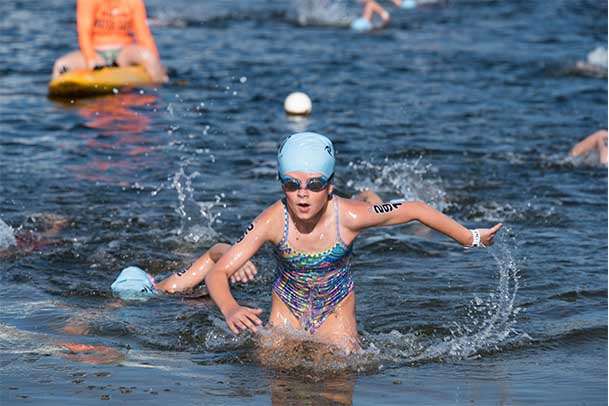 A record field will vie for selection at the All Schools Triathlon and Aquathlon at Lake Kawana on the Sunshine Coast this weekend.

725 athletes, a 15% increase on last year, will seek selection on their School Sport Regional Sports Team, which will compete at the Queensland School Sport State Championships in Hervey Bay next February.

The All Schools event is a selection race for Metropolitan North, Metropolitan East, Metropolitan West, Sunshine Coast, South Coast, South West and Darling Downs school regions.
The day begins with the longer distance Aquathlon for ten and eleven year-olds follows, where over 200 will start.  As the first age group able to be selected for a chance to compete at Queensland School Sport State Championships, which is often their first taste of competition at the State level.

They are followed by over 100 of our youngest athletes participating in the Kids Aquathlon, where competitors as young as seven run 500m, swim 100m and finish with another 500m run.
Lake Kawana’s calm water, flat run course and roads closed to traffic provide a safe entry to the sport for these emerging athletes – many of whom are taking the start line for their first time.

The senior, intermediate and junior triathlon events follow, with over 400 athletes looking for selection in their respective Regions.

The All Schools event is an indicator of future success for these athletes.  Last year, nine athletes who placed in the top 3 in their age groups across the All Schools triathlon events went on to podium at the State Championship race as well.  Also, last year’s winner in the Senior Triathlon category, Luke Harvey, went on to win the World Championship for his age group in Rotterdam, The Netherlands last month.

Race Director and Executive Director of Triathlon Queensland, Tim Harradine said we’ve been proud to run the All Schools event for Queensland School Sport for a number of years.
“For our athletes, we are very pleased to continue to grow and incorporate the triathlon pathway through an event like this,” he said.