Six months ago, Professional Triathlete Luke Harvey would never have imagined that he would be getting set to compete at the Commonwealth Games as a guide for Paralympian Sam Harding. Yet, this is Luke’s current reality.

A decade ago, 11-year-old Luke joined Sharks Tri Club (Sharks) as they were offering free run sessions with their membership. He was lent a bike and then in February completed his first triathlon on home ground at Raby Bay. After placing 2nd in his next triathlon a few months later, Luke was hooked and kickstarted his triathlon journey. Despite now being coached by Triple F Triathlon, this triathlete has remained a loyal Sharks member and regularly trains with the club.

Before becoming a guide, Luke had many successes and highlights in the triathlon world. This includes defending his 16-19 Junior Age Group World Champion title on the Gold Coast in 2019. Being on home soil, this meant that many friends and family were able to watch the memorable race, adding the cherry on top to this special day.

Earlier this year, Luke was given the opportunity to guide Sam Harding (a PTVI athlete) at his first Continental Cup in Devonport (Tasmania) and his third triathlon. As Sam lives in Canberra and Luke resides in Brisbane, the pair had several phone calls and then first met at Melbourne airport in transit to their event. They spent some time together to get in sync before their race. The boys were facing several challenges such as only having just met and Luke never racing on a tandem bike before. Despite dropping a chain in the event, Sam and Luke were incredibly compatible and won the 2022 Oceania Triathlon Para Cup in Devonport.

Being involved in the sport from multiple angles has provided Luke with a valuable insight into our unique world. One of his biggest challenges was learning how to balance training for three individual sports, full time work, maintain a social life and efficiently recover before each session. This juggling act has been the most valuable life skill that Luke has developed from the sport. Other lessons that have been learnt along the way include dealing with disappointment, staying committed and learning how to listen to his body – both mentally and physically.

Luke intends to remain being a guide for the upcoming international season and has one eye on the 2024 Olympics in Paris. But no matter what the future holds, our local Aussie hero is focusing on enjoying the sport and the lifestyle it brings, travelling the world, and seeing how far he can push his body.

Sam and Luke will be competing at the Commonwealth Games in Birmingham. To watch the journey, be sure to follow Luke on Instagram 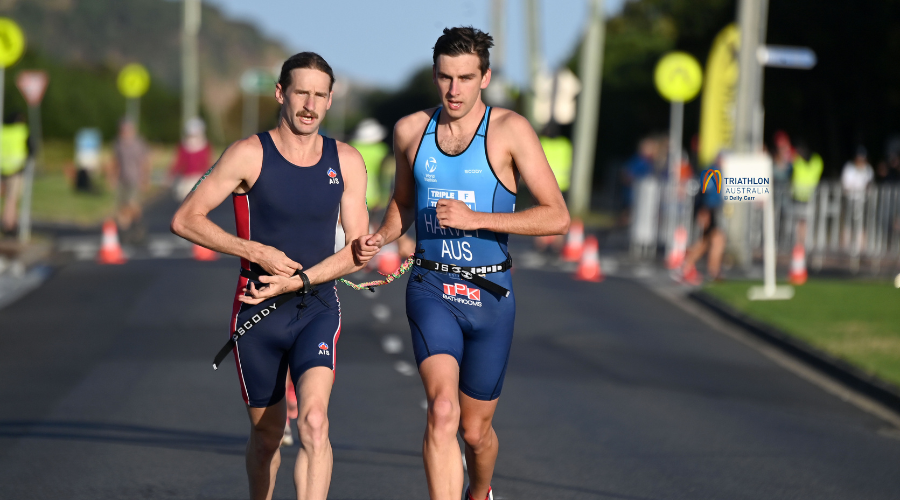