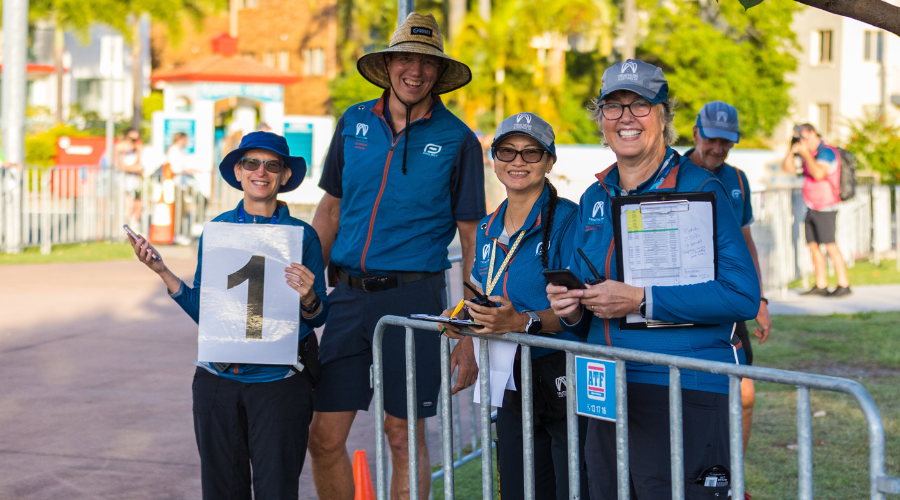 Steve Toms is an extraordinary man who has a strong passion for triathlon. Although there have been periods where the sport was not a priority, Steve always finds himself back on a start line. This continued involvement has sparked a desire to give back and learn more about triathlon. Therefore, Steve decided to become a Technical Official (TO).

Steve got involved in triathlon back in the 1980s while at uni. After completing his first race at Werribee (Victoria) life got in the way and he took a break. In the early 2000s, Steve fell back in love with the sport and raced the Bribe Short Course series. There were a few years where our triathlete moved overseas for work, but he returned in 2016 and picked up right where he left off. Steve has now completed some landmark triathlons including Noosa and Mooloolaba.

There are many aspects of his Technical Official role that Steve enjoys. From assisting with the smooth running of the races to being a key point of contact for athletes, he tackles every challenge with a smile.

Steve’s most recent achievement was receiving the Sunshine Coast Officiating award for the quarter. He has also been part of the Technical Official teams for the Commonwealth Games Selection race and the Australian Paratriathlon and Intellectual Impairment Championships which were both held in April 2022.

Triathlon is not the only sport that Steve has immersed himself in. Our TO also officiates Wheelchair Basketball and Wheelchair Rugby with the Suncoast Spinners. One of his recent games includes the nationally televised Wheelchair Rugby National Championships, which was understandably a tremendous experience and invaluable learning opportunity.

Being heavily involved in triathlon has taught Steve many skills that are transferable to life outside of sport. Constantly surrounding himself with athletes who have achieved their dreams through commitment, perseverance and dedication is truly inspiring. On the flip side, racing has also shown Steve that preparation is key – it is very satisfying to set, prepare for and achieve personal, work and life goals.

Steve, thank you for volunteering your time to help our sport.