Toby Powers, a 19-year-old triathlete from Hervey Bay, is an extremely mature and well-rounded athlete. His grit and dedication to the sport was rewarded with his appointment on the World Juniors Australian Team bound for Montreal, Canada. After initially being named a reserve, Toby was elevated to the team when Australia received a fourth quota spot. On 24th June, the team raced the World Championships in a duathlon format (due to the poor water quality eliminating the swim leg) where Toby powered through the field to a silver medal in a time of 51 minutes and 57 seconds.

After getting bored of just focusing on running, 12-year-old Toby decided to enter the Queensland State Aquathlon. This decision then led to him following his mates’ footsteps and joining his local club – Hervey Bay Triathlon Club – where he was coached under Brian Harrington (Harro). Fortunately, the Schools State and National Titles are held at Hervey Bay each year, providing a home ground advantage. Considering the electric atmosphere and intense level of competition at these events, our local hero felt a strong drive to train hard and race well. Having this determination early in his triathlon journey, Toby learnt many useful skills that he continues to apply in his professional career.

Before moving to the Gold Coast to train under Queensland Performance Centre coach Dan Atkins, Tokyo Olympian and 2018 Commonwealth Games Gold Medallist Matt Hauser trained alongside Toby in Harro’s squad at Hervey Bay. The two only trained together for about six months but during that time, Matt made a lasting impression on young Toby. From rolling up to training looking strong and fit to knowing when to be serious or fun, Matt had a positive influence on the club’s training environment. It also showed Toby the type of dedication, physical and mental strength needed to be one of Australia’s best triathletes. Matt’s humble presence clearly resonated with Toby, who described him as ‘just a good guy’. The pair remain in contact today.

Despite training just under 20 hours a week, Toby is also 18 months into a 4-year electrician apprenticeship where he works 38 hours a week. Obviously, this poses some challenges but has also been an opportunity to learn life skills that are transferable into triathlon. It took his current coach, Drew Box, and Toby a few months to design a schedule that balanced all requirements. But one thing was clear from the get-go, learning how to recover efficiently was going to be critical. This involves a strict regime of getting enough sleep, managing water intake, and discovering little individualised hacks that benefit Toby’s body. The early mornings and long days are character building and have forced our young athlete the skills of self-discipline, adaptation, pushing through fatigue and understanding the body both physically and mentally. Although he is spread quite thin, Toby is proud that he has learnt to manage his intense training load and full-time work and recommends this approach to other athletes. Having another life outside of the triathlon world ensures this apprentice remains grounded and has a secure plan after his sporting career. Although this lifestyle has both ups and downs, Toby feels doing the hard yards early will create more opportunities in the future.

Ironically, considering Toby’s first exposure to triathlon was through an aquathlon, Toby’s strongest leg is the bike. Years of crit races and skills training with former coach Harro showed at this years Devonport Triathlon where Toby rode one of the fastest times in trying circumstances. Due to the 2020/2021 border restrictions, this event was the first time Queensland athletes raced against other states in two years. But during this new era, Toby proved he was one of Australia’s best emerging athletes.

Like many of our juniors, this year is the first opportunity to race internationally. This is a truly well-deserved milestone moment for our young Australian representative. Toby is currently focusing on improving his weakest leg – swimming. Being a very ‘go hard and fast’ racer, slowing down and nailing his swim technique has been a priority before jetting off overseas. Toby will be on the start list for the Europe Triathlon Junior Cup in Tiszaujvaros, Hungray. He will also race in the Junior Cup in Tabor (Czech Republic) on 24th July. The main goal of these races is to gain experience, develop confidence before becoming an U23 athlete next year and make a strong statement on an international scale.

A successful athlete requires a strong support network, and this story is no exception. Along the journey, Adam from Giant Hervey Bay has supported our local triathlete, with Toby regularly expressing his gratitude on social media. His coach, Drew, has adapted training to ensure his apprenticeship was an achievable goal. Managing both triathlon and work would have been impossible without his guidance, advice and expertise. And of course, Toby’s parents have lived and breathed the early mornings, late nights and the highs and lows that our great sport brings. This endless love and support has been an instrumental factor to Toby’s success. 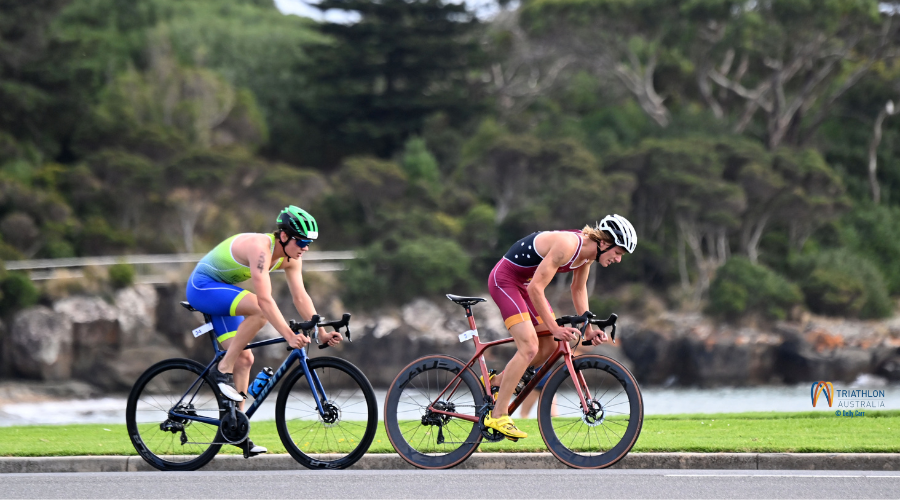