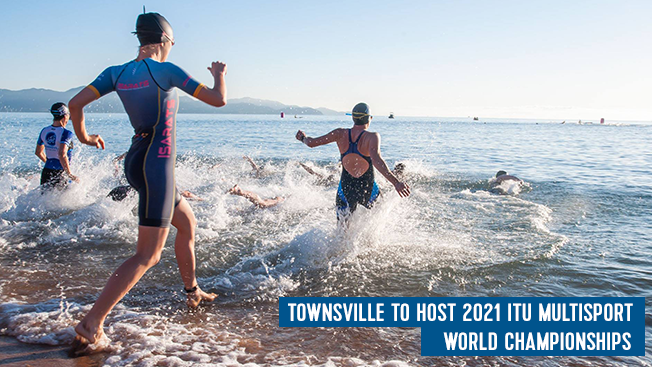 The Palaszczuk Government has secured the biggest sporting event ever to be held in Townsville – a fixture set to pump more than $16 million into the economy.

“This is a big win for Townsville and will enhance the city’s reputation as a world-class destination for major events,” Ms Jones said.

“We invest in events like these because they attract tourists to Townsville and support local jobs”.
“Securing the ITU Multisport World Championships will also benefit to one of the region’s most high-profile events - the Townsville Triathlon Festival - which will be significantly expanded ahead of the world championships.”

Mr Stewart said the event would expand from one to two weekends before the world’s best athletes arrived in August 2021 to contest five world championship disciplines comprising various male and female race categories for elite, age group and paratriathletes.

“Tourism is a cornerstone of our economy in North Queensland. Over the last five years we’ve grown the local tourism industry by more than $70 million and created an extra 100 tourism jobs in Townsville,” he said.

Tourism Industry Development Minister Kate Jones said the world championships were secured through a partnership between Tourism and Events Queensland, Townsville City Council, IRONMAN, Triathlon Australia and Townsville Enterprise.
ITU president and IOC member Marisol Casado said it was a great pleasure to welcome the triathlon family once more in Queensland, heading to the city of Townsville in 2021 for what will be the 5th edition of the Multisport World Championships.

“Over the past years, Australia has become synonymous with the sport, playing host to some truly memorable performances and great champions, staging races the results of which have helped shape the path of entire seasons,” Ms Casado said.

“Once again there will be five World Championship titles up for grabs across the ten days of competition at its best; in duathlon, cross triathlon, aquathlon, aquabike and long-distance triathlon”.

“Being able to hold these important races in one fantastic location and all under the banner of one festival has proved to be hugely beneficial for athletes, spectators and media alike, allowing the global ITU family the opportunity to gather together for a true celebration of the sport, and we are extremely excited to head to Townsville in 2021.”

The 2019 Townsville Triathlon Festival will run from Saturday, 17 August to Sunday, 18 August 2019. If you’re looking to get an early go at 2021 ITU Multisport World Championships.