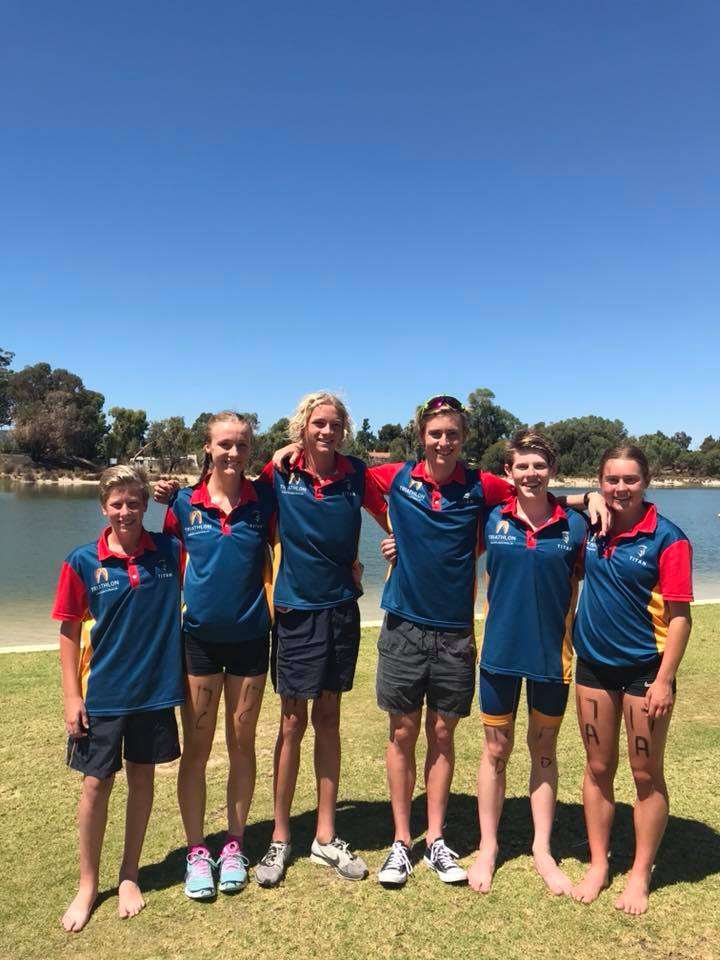 National championships are always a highlight of the Australian Youth and Junior Racing Calendar, and this year they were again held in Perth. Triathlon SA took a small but talented and determined team of athletes across the bight to take on the best 13 to 19 year old triathletes in the country over a modified race format.

Each athlete was required to race 3 times over the 2-day event. We had Fern Davies, Charlotte Derbyshire, Sam Tierney and Declan Gillard-Martin in the junior category, Ernie Brown and Bailey Giles in the Youth A category.

Cold, windy early morning conditions were replaced by hot, windy conditions as each day progressed. It was high octane racing in very tough conditions. Tactics and skills work in the lead up put our athletes in a good position to race well here. The heats played out as expected, Athletes racing hard to try to cement a spot in the A finals, often later in the races, athletes saving some energy for their finals if in a good position. Hard but smart racing.

Sam Tierney scraped into the Junior A final after some cramping issues on the run that followed from a very strong bike in the heat. Charlotte Derbyshire also made the Junior A final. Once through to the finals, there was a 90min window of recovery before they were back at it for the big show.

Declan Gillard Martin and Fern Davies progressed to the Junior B finals after strong showings in the heats but just missing the cut offs. Ernie Brow and Bailey Giles both narrowly missed the cut off for the Youth A final, racing well in the heat and looking forward to their B final which was also held on the following day.

Finals time rolled around, Race plans were set out and athletes were excited, a bit nervous and ready to race.

Charlotte was first up, after having won the national title for the last 2 years as a youth athlete, stepping up into juniors now was going to be a real challenge, racing against girls 1 and 2 years older than her. The race came down to a foot race with 10 girls getting off the bike together. After 2.5km of running as hard as they could it came down to a sprint finish. Charlotte taking the inside line on the final turn and making a small break to win by 2 seconds. A third National championship and possibly the hardest race Charlotte has ever raced.

Fern made an early break on the bike in the B final with 3 other girls and gapped the field. Doing some strong work on the bike in tough conditions also left this final down to a running race. Fern ran strongly with the other girls, positions changing many times over the short run. Fern finished with a strong kick to pick up second place in the B final and a great result. Finals racing was proving to be super-fast and close, bringing out the best in our athletes.

The Junior boys turn, wind kicking up even more, and getting hot now, Sam, unsure of how his cramping calves would hold up on the run we set a plan to swim and bike hard and see what happened off the bike. The plan went perfectly, a great swim and making the lead pack on the ride made for some very fast riding. A large pack again coming into transition together and some great positioning and decision making had Sam off the bike and running in the top few. He managed the legs well running strongly when they felt good and managing them when they were not.

Again, Sam was racing as a first year junior against guys much older, a top 10 finish (9h) in the A final was a great result.

Declan swam and rode strongly in the B final, some solid bike improvements this year have seen Declan able to put himself in great positions off the bike in strong fields. Running strongly early, and hanging on well over the last lap of the run, Declan finished 10th in the B final. Some real positives coming out of the weekend.

Bailey Giles and Ernie Brown racing in the Youth A "B" final (yep, confusing we know).

Bailey had a superb swim, swimming onto the back of the group that started 30sec in front. Riding in a small group that was eventually caught by the main bunch this was an ideal situation for Bailey. Ernie was also in the bigger bunch that formed and again, similarly to the other finals, this came down to a large pack hitting T2 together and a running race!

both boys had the best runs they have had for the season. Running strongly throughout the run picking up spots as they went. Bailey finished a great 5th in the B final only 1 minute off the winners time. An exciting result for Bailey and a great experience. Ernie ran himself into first place in the B final and into 9th overall which was superb. Both these boys have exciting futures.

A very quick turnaround to the Mixed Team Relay. About an hour for the youth boys, as expected some very tired bodies but great experiences in backing up races physically and mentally.

Both boys put in a strong showing over their solo relay legs.....and straight into the pink donuts. (Ernie s favourite)

The Juniors had a night to recover from their individual races to the relays but still some tired and sore bodies. The pace was on early and Charlotte got SA away in a break with 2 other teams, Sam put in a superb leg, most importantly with a vey strong run of the bike to keep us with the other teams going into leg 3. Fern had a very strong leg hanging in close proximity to the other teams, again a strong run, to hand over to Ducky for the final leg. Ducky hit the water hard, swimming back onto the group, and passing them to get out of the water first, riding with the leaders again it was to come down to a foot race. On tired legs and up against some of the fastest runners, Declan had a strong run to finish well and cementing a 3rd position for the team. A superb result!

All in all, a great weekend was had by all, some superb racing, results and team building opportunity.

It’s a real pleasure to be a part of a team where each athlete is so supportive of the rest of their team. A team and a culture that all athletes should be proud to be a part of.

A couple of local races and the final National series event are left for the year now. Looking forward to plenty more great racing!