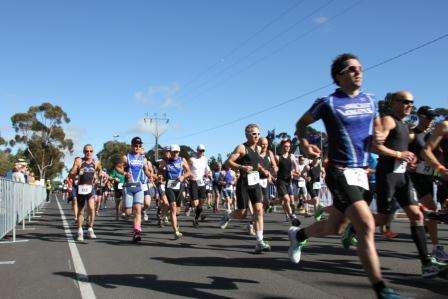 A new duathlon series is now available for athletes.

With the ITU World Duathlon Championships coming to Adelaide in spring of 2015 to the centre of Adelaide. Triathlon SA in association with the Adelaide Triathlon Club is proud to launch a new race series for SA athletes. Athletes will have the opportunity to be crowned as the inaugural Duathlete of the Year across a 5 race series.

The first 4 races will be held on a course that utilises the Clipsal 500 track and the beautiful Victoria Park with the final race being in the Barossa Valley. The best 4 of 5 results across the 5 races will count towards Duathlete of the Year Award. This year that award will be made at a luncheon held at Seppeltsfield after the Barossa Event. Expect a great quality series from the same people that bring you the Murrayman.

Awards will be given to male and females as follows;

Please note that to be eligible for any awards or prizemoney you must be a member of Triathlon SA.

Prizes and prize money will be announced shortly which will ultimately be decided by the level of support that is given to this event.

For course details for the first 4 races go to the event website here.

Full details of the Barossa event will be available shortly.

The best way to enter is to enter the 5 race option which will essentially gives you one race for free and the presentation lunch at Sepptlesfield.