The very heavy rains over the past few days ruined plans for the swim here in Tønsberg. A Government ban on swimming in the bay of Oslo confirmed the concerns of the Technical Delegate who had checked the water quality tests and seen record levels. The weather conditions suggested that within a couple of days the water in the river would be as clean as ever but race-day dawned with no possibility of a swim. The beautifully set up pontoon was not to be used. 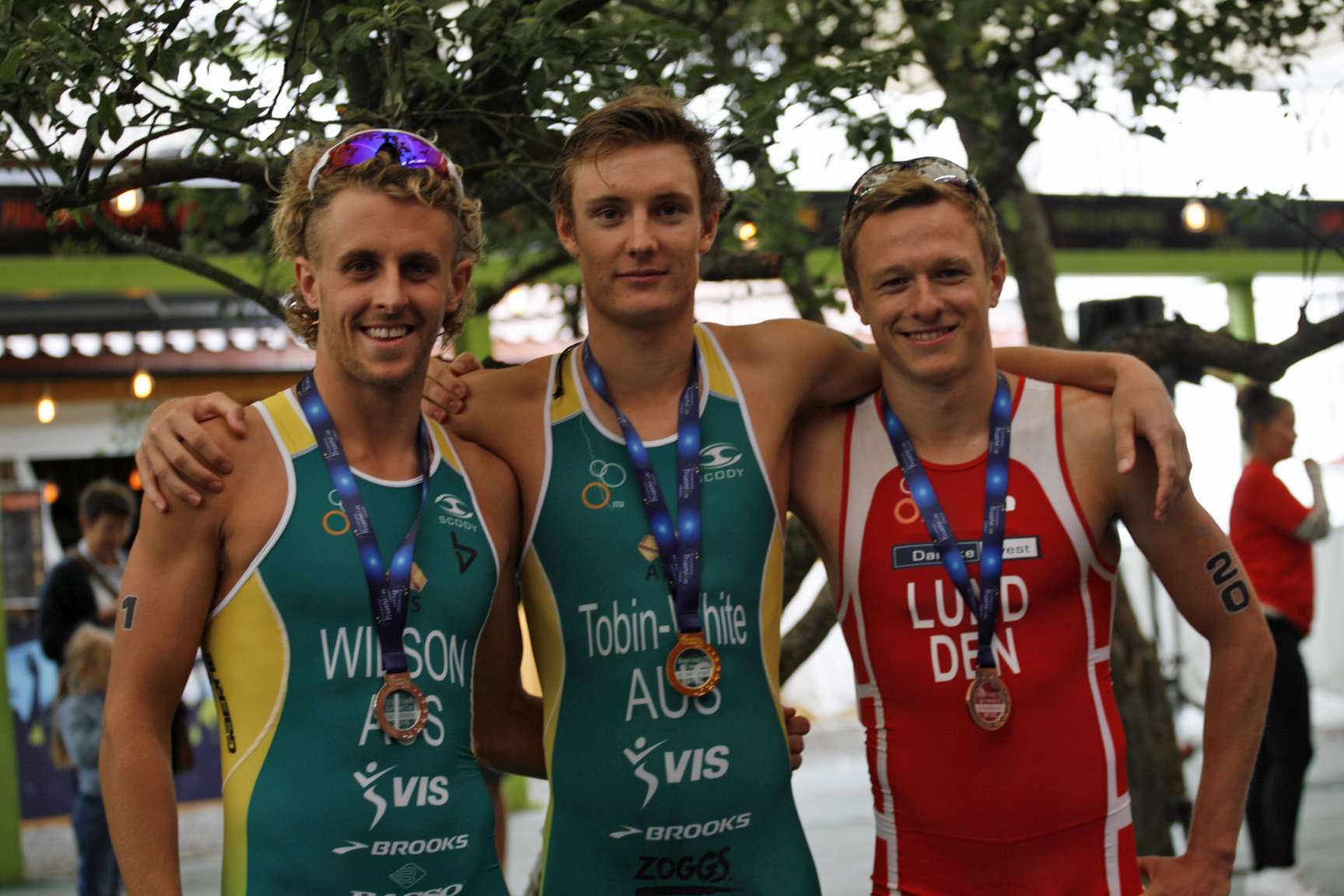 The contingency plan provided for a duathlon and so the announcement was made. The coaches and team mangers briefed the athletes and as they checked in the Technical Delegate was there to answer any questions.

A 2-lap run making 4.8k would be the first leg, followed by a 20k bike and a final short run of 2.4k would decide the medals today. With dry roads and little wind this meant that we would be guaranteed an exciting race. There would also be the matter of time penalties that had to be served by those athletes who missed the briefing. In a race that does not have a swim as its first segment, athletes who miss the briefing do not now get moved to the end of the line-up and then have the less favoured place on the pontoon. Since the end of last year ITU Rules impose a time penalty on the first run. This would see race favourite Yuliya Yelistratova UKR amongst others take the ten seconds before the bike.

Levkovska and Yelistratova both chose to serve their penalties on the first lap, leaving Kjær alone to run. Behind them came a large pack of runners, including the two Russians, Valentina Zapatrina and the younger Ekaterina Matiukh, Amanda Bohlin SWE, Sara Pérez Sala ESPand Brittany Dutton AUS. 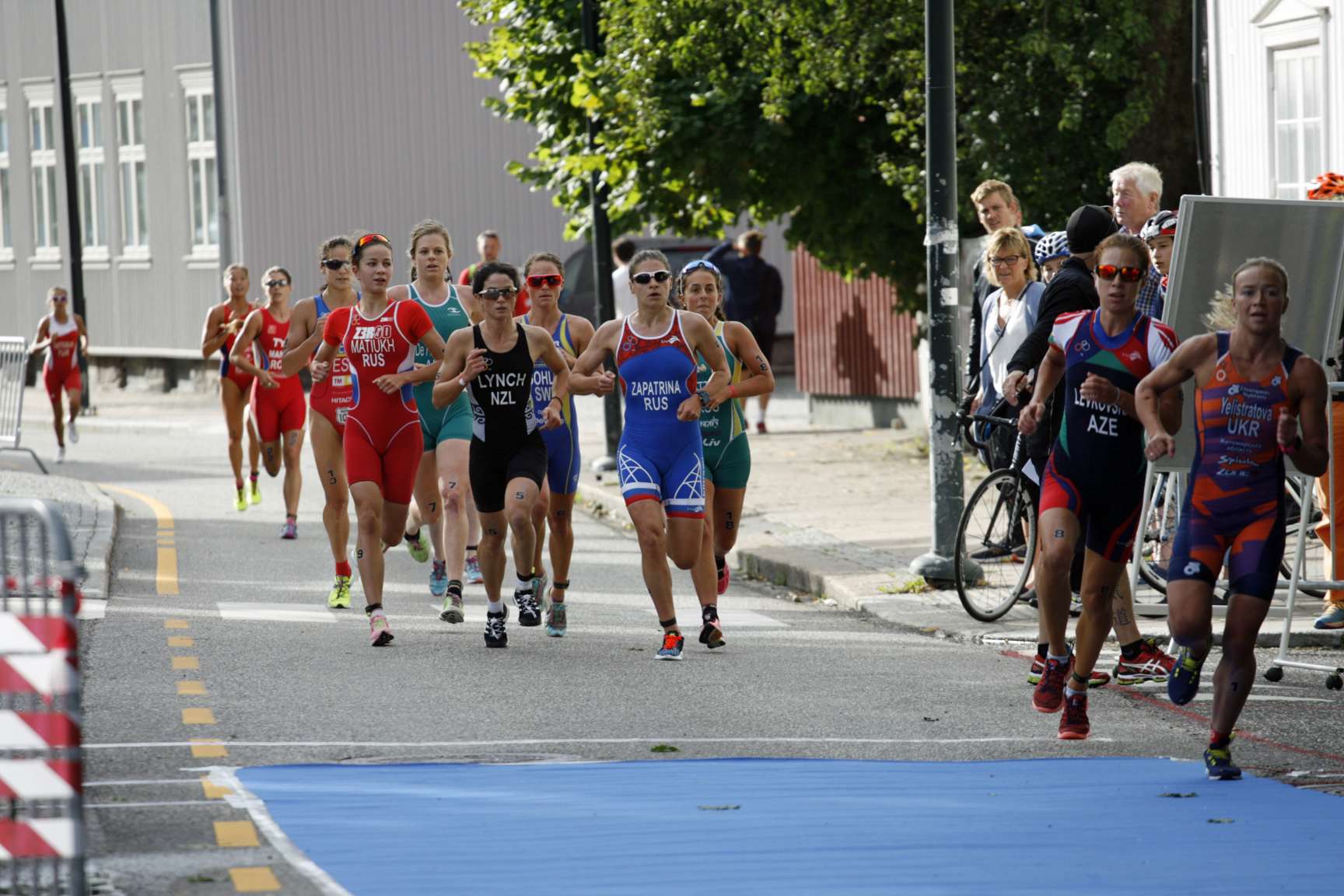 Into T2 - no chance for any errors now.

She then very kindly helped interpret for Matiukh, who, terribly shy with her first live interview, said, “It is much harder to keep pace at this Elite level, compared to racing as a Junior but an important development in my career. My next race will be the Russian National Championships and then to Cozumel. This is my first race here and I hope to be here next year.”

Zapatrina, also using Yelistratova to interpret, said, “I would have loved to have the swim today. This is my strongest discipline. I felt much more confident on the run in other races. Today was not so good but I hope to be stronger for the Russian Championships and then for Cozumel.  The bike course was interesting. I liked it but I think there could be some more barriers to secure the course.”

Justus Nieschlag GER, with gold last week, was hoping to do the double but he was up against a massive wall of gold and green Australian uniforms. Leading the team from down-under was Declan Wilson AUS waering #1. 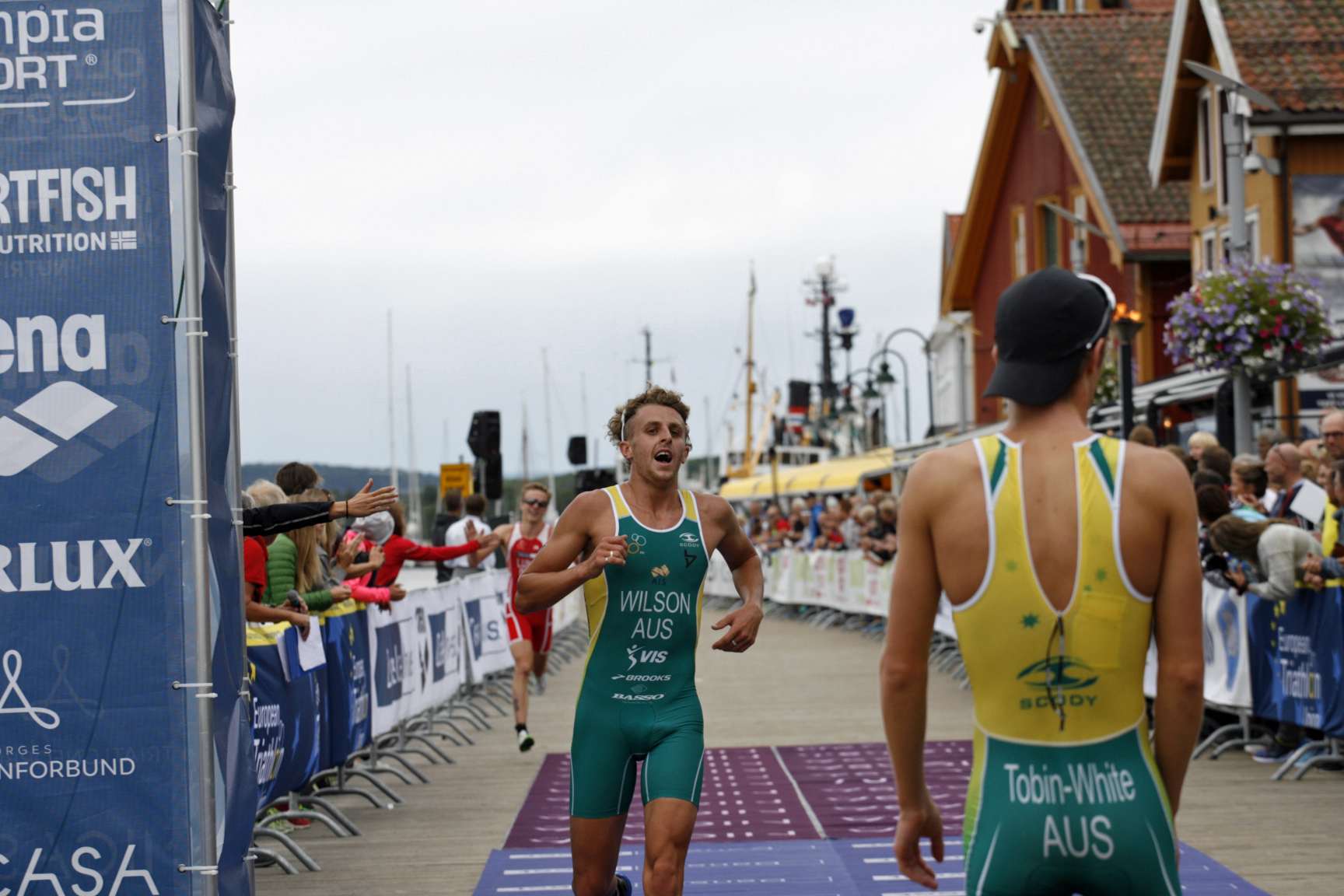 There were however some thrills especially when Stornes broke away from the front and raced through transition to the delight of the crowds and astonishment of the other athletes.

Coming into T2, no mistakes were made and it was Iden and Gundersen who led them out onto the run, with the Aussie uniforms of Wilson and Joel Tobin White very visible.  Tobin White had a disappointing race in Malmö but here in Tønsberg, things were looking good. As the run unfolded, things got to look even better and for only the second time he was able to edge ahead of team-mate and friend, Wilson.

The crowds now lined the riverfront and cheered the Australian athlete as he raced to the line, being chased all the time by Wilson.

Lund said, “No swim was good for me after a terrible swimming season for me. It hurt a little bit out on the run but you don’t give everything on the first lap. It was almost like a WTS of World Cup out there on the run. It was great. Soon we have the Nordic Championships and Danish Championships in Fredericia. It will be nice to race these guys again.”

Arild Mjøs Andersen, President of the Norwegian Triathlon Federation spoke after the event and after the 600+ age group athletes had raced the open event, “This has been a major step for us as a Federation. Having this event here in Norway, despite the challenges that made the swim impossible, I am happy that triathlon has left its mark in Tønsberg. I am sure that for any spectators who knew not very much about our sport, the race today showed them how exciting triathlon can be and now, when they watch the triathlon in Rio, they will be even greater supporters of our athlete there, Kristian Blummenfelt. You know, his father worked here as part of the registration. I am proud of all our athletes who raced here today. The organisers here delivered a great event and I am hoping that we will see you all again next year, here in Tønsberg.”

So, not quite what was planned but with each challenge the LOC worked hard to ensure the show went on. Asking the athletes and spectators after the race, it was certainly a hit and the big question on everyone’s lips was “can we come back next year?”