EDMONTON, August 29, 2014: In a day that started out celebrating another golden moment for legendary Australian triathlete Michellie Jones it finished with a double celebration for the future generation.

Jones turned back the clock to add another world title to her impressive list of achievements when she clocked the fastest time of any age grouper on the day to win her first ITU Age Group World Sprint distance title in the 45-49 years age group.

And by the afternoon three youngsters she had addressed in the Australian Team Meeting in Edmonton just last night, kick-started their own careers with some outstanding performances. 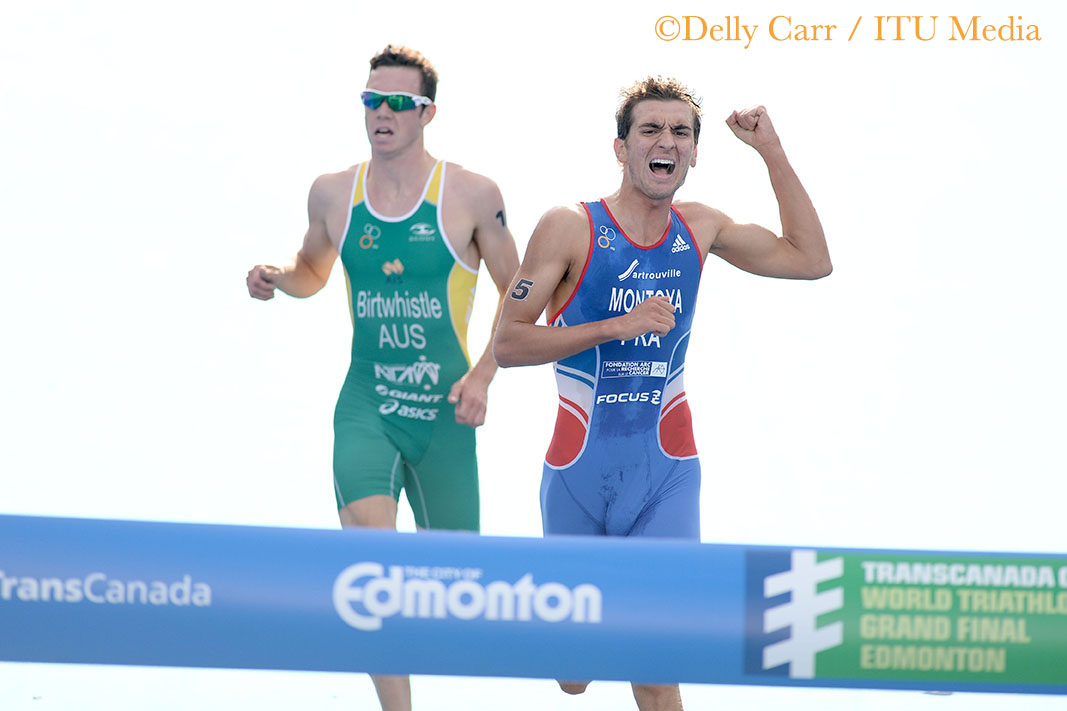 Birtwhistle and Quirk gave Australia a flying start, emerging from a red hot field of 70 starters.

Birtwhistle, 19, in his final year in the Under 20s, felt agonisingly short of the gold in a dramatic sprint finish with Raphael Montoya of France

after a neck and neck race to the finish with 17-year-old Quirk a fast finishing third.

A group of over 40 riders battled the four laps on the tricky bike course before the "charge of the light brigade' through transition and it didn't take long for Birtwhistle to dictate the run.

Quirk, competing at his first world championships, positioned himself early in the run and with coach Dan Atkins yelling encouragement in the final stages charged past his competition to grab the bronze.

"It is a whole lot better feeling than finishing sixth in London last year - and although it would have been nice to take the gold, it is satisfying to get on the podium and with Calvin, who did a great job," said Birtwhistle.

"I feel like I have grown so much in the past 12 months and I feel I am ready to take the next step into the senior ranks."

In the girls race, Youth Olympic Games gold medallist Brittany Dutton has stormed home to finish sixth in the ITU Junior World Triathlon Championships in Edmonton today. Unable to bridge the gap with the lead pack of seven and two girls in between on the tricky 4-lap bike course, Dutton held her own until the five kilometre run when she stormed home to peg back five girls in a spirited sprint to the line.

"I'm stoked with that result," said 16-year-old Dutton, who admitted she had to be extra careful on the tricky corners on the bike. "I had to make sure I was at the front going into each of the corners to avoid any crashes." Unfortunately fellow Australian and Queenslander, Sophie Malowiecki, was a victim of the tricky bends and fell, forcing her out of the race. Dutton and Malowiecki came out of the water together and rode in the same group. The 17-year-old suffered superficial wounds and bruising which left her shaken in the medical tent after the race.

Australian Performance Director Bernard Savage and Elite coach Jan Rehula were quickly on the scene to assist and accompany the tough-as-teak schoolgirl back to the medical tent. "She's a tough kid and thankfully there is nothing broken," said Savage. Australia's other competitor, WA's Kira Hedgeland, was uncharacteristically further back in the swim than normal and as hard as she tried couldn't peg back the leaders, finishing strongly for 15th.