EDMONTON, August 30, 2014: Perth mother of two Sally Pilbeam will have a special present to show her two sons Ben and Nick when she arrives home to WA this week.

A gold medal from the ITU World Paratriathlon Championships in Edmonton in the PT3 category, which includes arm amputees over a 750m swim; 20.4km bike and 5km run. 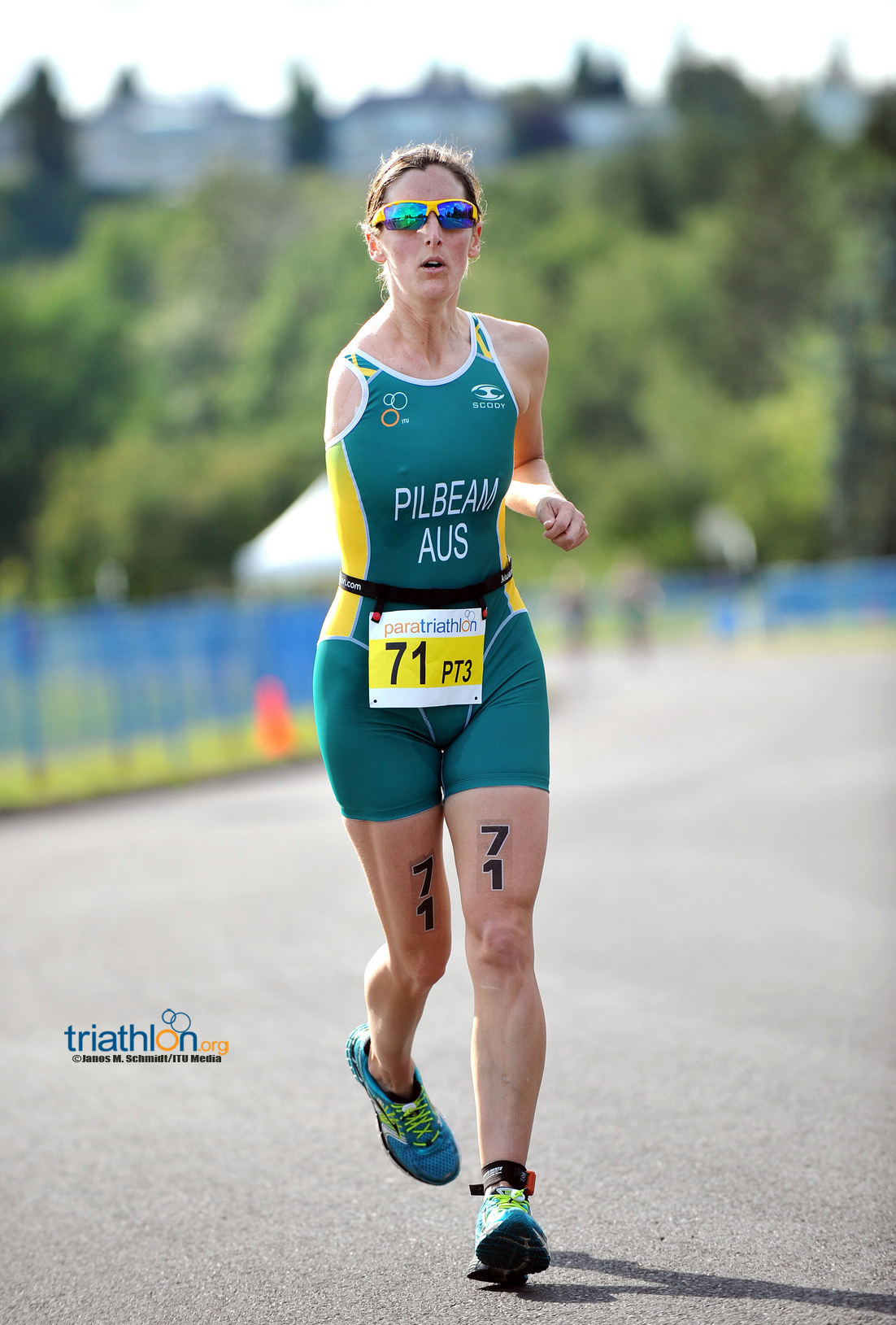 Twelve years ago Sally lost her right arm from her shoulder through cancer and 18 months ago she contested the first Australian Paratriathlon Championship and today she is a world champion.

Sally left her two boys Ben, 9 and Nick 5 in tears last week when her and husband Matt left with the Elite Australian Paratriathlon team.

“This is for the two boys, I’ll dedicate this gold medal to them and my parents for all the support they have given me,” said Pilbeam.

“It makes all the early mornings and the late nights and the hard work worthwhile, it’s the best moment and I have to thank my family for allowing me to fulfill my potential and my coach Andrew Budge. I could not have done  it without them.”

“I actually swam really well, the bike was good and my run has really improved,” said Sally, whose husband Matt has been with his wife every step of her journey and acts as her personal handler on race day.

He was first to the finish line to hug his wife when she braced the tape to claim the gold and her Australian team mates were all waiting in the wings to congratulate her.

Her training has seen her drop her personal best time for 5km from 37 minutes 18 months ago to 24 minutes today and she was quick to praise coach Budge for his time and commitment.

When asked about her most difficult hurdle she says: “Learning to ride a bike with one arm has been the most difficult thing for me. Working out how best to adapt the bike was challenging.”

The Australian Paratriathlon team, all integrated into their first major Elite team and their first World Championship, aquitted themselves with distinction, without four-time world champion in the PT1 wheelchair class Bill Chaffey, who broke two bones in his pelvis in a freakish training accident the day before the team was to leave.

Leg amputees Godfrey, Garvey and Swift were all very competitive against their specific competitors. Swift was the second leg amputee in his PT4 category.

Australia’s Paratriathlon Performance Manager Kathryn Periac said there were some very encouraging performances considering the team had only been seriously competing at an Elite level for 12 months.

“I could not be prouder of the whole team and very happy for Sally who has put vin so much hard work – she deserves the gold medal,” said Periac.

“We’ve come a long way in 12 months but there is still a long way to go and I know they are all determined to make the most of their opportunities.

“There is a specific camp at the AIS in November and I know we will be better for next year’s World Championships in Chicago as we await the outcomes of the final categories for the sport’s debut in Rio in 2016.

TOUGH DAY IN THE OFFICE FOR AUSSIE WOMEN

EDMONTON, August 30, 2014: It was a tough day in the office for Australia's Elite women at the ITU World Triathlon Grand Final in Edmonton today. Gold Coaster Ashleigh Gentle, who rode and ran almost the entire race by herself after leaving herself in no-man's land, was the best of the three Aussie girls, finishing 18th with London Olympian Emma Jackson, struggling from the outset to finish 27th and last year's Under 23 World Champion Charlotte McShane 38th.

American Gwen Jorgensen, who crashed out of last year's Grand Final in London, again produced an extraordinary 10km run leg to run past 17 competitors after hitting transition in the second bike group. Kiwis Andrea Hewitt and Nicky Samuels hung on for deserved second and thirds with Jorgensen winning the overall title from fellow countryman Sarah Groff, with Hewitt third. Gentle was quick to add that today's race was her entry into "non drafting" after missing the first packs on the bike after "getting knocked from pillar to post" in the swim. But she was philosophical about the future, saying it was the first time in years that she had reached this stage of the year injury free.

"It was as mentally a tough race as I've ever had, and I have to thank Edmonton for turning on a great race and for the crowd for getting me through - it was a tough day," said Gentle, who will race in the Beijing International before returning home to prepare for the domestic season. Jackson, who has been battling a head cold since arriving in Edmonton a week ago, admitted she had "the worst swim of her life" after getting her goggles knocked off at the first buoy. "I think I was almost last out of the water, I felt terrible and really struggled but I knew I just had to keep going," said Jackson, who can still be satisfied to finish seventh overall for the season.

Emma Moffatt, who did not race here because of health issues finished 17th, Gentle 34th, McShane 36th and Gillian Backhouse, who will race the Under 23 World Championship tomorrow 49th.


EDMONTON, August 30, 2014: Australia's Matt Baker and Kenji Nener have both produced admirable performances to finish 12th and 14th respectively in a tough ITU Under 23 World Triathlon Championship in Edmonton today.

Both boys fought hard all day with Baker's decision to move to Europe for four months to train under Danielle Stefano and alongside Ryan Fisher, Joel Tobin-White and Declan Wilson paying huge dividends. He surprised even himself with his best run over the 10km Standard (Olympic Distance) after an indifferent 1.5km swim and a solid 40km ride.

"The decision to leave my home coach Kieran Barry and with support from Triathlon Australia, my mum and dad and money earned from working as a draftsman and a kitchen hand I funded myself to Europe.

It was a big decision, a big move, but a move that has certainly paid off, and rewarding to get a result like this. "It has been an investment in my future and at the moment it has been very rewarding. "I will now go back to the Central Coast, sit down with my home coach and assess my future."

Nener, who has also taken a huge leaf in the QAS squad under Stephen Moss and Josh White came out in front of Baker in the swim, rode and often dictated the bike and for the first 2.5km of the run, looked set for a rewarding top ten finish. But the Brisbane-based former WA boy, whose career has gone from strength to strength this year faded for the final 7.5k, and although disappointed with his 14th place finish, knows he has taken some big steps forward in 2014.

There was further bad luck for the Australian team on the eve of the race with the loss of last year's Under 23 bronze medallist, Declan Wilson, who suffered a freakish knee injury walking out of the lift at the team hotel.

Despite instant treatment from the Australian team staff, with immediate icing, the damage done saw his knee swell, forcing his late withdrawal. A bitter blow to a young athlete who had primed himself for a big performance.