Australia’s Tim Reed laid down a championship performance to out race his young charge Sam Appleton and win the inaugural Challenge Gold Coast. 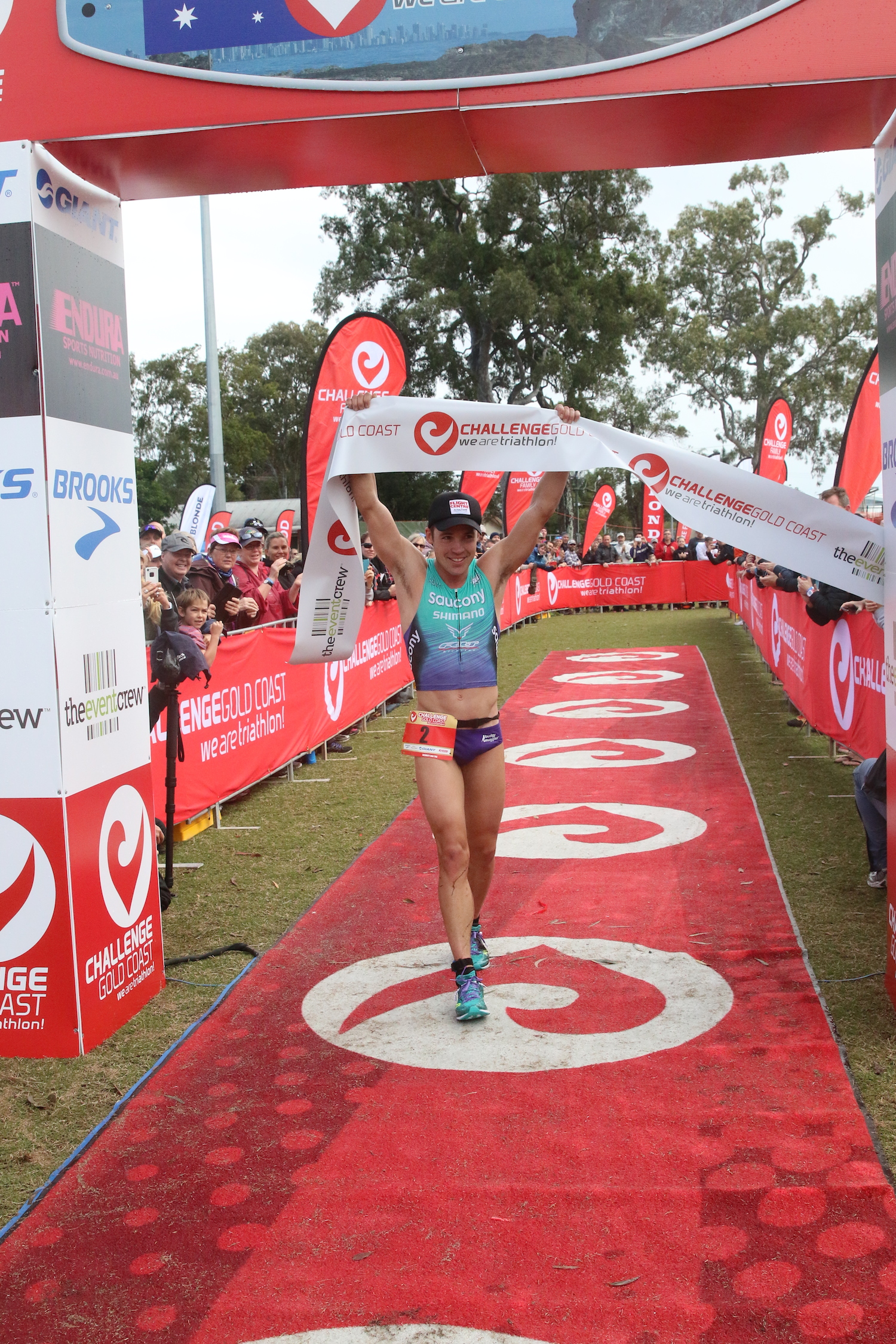 Byron Bay based Reed is coaching the Sydneysider Appleton via correspondence and was full of praise his apprentice.

“I changed my tactics after the course was shortened, I learned this course and planned to attack at 40km but only had 3km to get a margin (due to the shortened course) so I thought I’d go for the gun. At about 20km Sam and Casey (Munro) caught me but Casey flatted. Sam and I built our lead from there,” said Reed.

Unseasonal rain forced organizers to reduce the bike leg from 90km to 40km due to some local flooding.

“After consulting with all the key services, projected weather patterns and monitoring the conditions on Saturday the decision reduce the bike leg was in the best interest of athletes,” said Race Director Kerry Stubbs.

Rain continued to fall as the race got underway but didn’t dampen the spirits of the 1,400 strong field and supporters that turned out.

On a rain soaked course the 40km bike was not expected to see too much change between that group of strong riders. By at the 20km mark heading back to town Reed and Appleton had amassed a three minute plus lead from Nicholas Hull and David Mainwaring with a group of eight in the main chase group that included Jacobs, Robertson, Barrie and David Dellow.

Tim Reed moved into the lead on the early stages of the bike leg with Appleton in tow, the pair pushed the pace to extend their lead at the changeover by over three minutes to Nicholas Hull and David Mainwaring.

Jacobs and Robertson were the next through transition but had a mammoth task of pulling back that lead over the 21.2k run.

As they came through for the second lap of the run, Reed had got his nose in front of Appleton with a 30 sec gap and Mainwaring the next through but 3:30 adrift.

In the end it was a battle of two, Appleton came within 15 seconds of his coach but couldn’t bridge the gap. Mainwaring put in a strong performance to finish third.

“We both sort of had the plan to run the first 10km conservatively but Sam didn’t really stick to the plan and kept closing in on me so I had to quicken up the pace. It was just a bit of cat and mouse out there,” said Reed.

Appleton will head to the US next week to prepare for the 70.3 world championships and admits it was a good confidence boost.

“We were really lucky we got a good break. Tim was riding really strong, we got some breathing room coming into the run,” said Appleton.

“I’ve done a good block of training so I didn’t really freshen up for this race so it’s really good to race well.

“I built into it and after 10km Dave (Mainwaring) was in third running strong I thought I had better shake a leg.

“Between 10-15km I put in a sustained effort for 20mins and managed to pull the lead back to 10 second. At the turnaround we were really close but he still had a bit in the tank,” said Appleton.

The feedback on the new course was overwhelming praise.

“Deadset it’s going to be one of the best courses in the world it’s so scenic a little bit technical but nothing you can’t handle, you’ll never get bored on it,” said Reed.

Annabel Luxford was the first to emerge from the swim, with the Kiwi Amelia Rose Watkinson in tow and Lisa Marangon right on her heels. 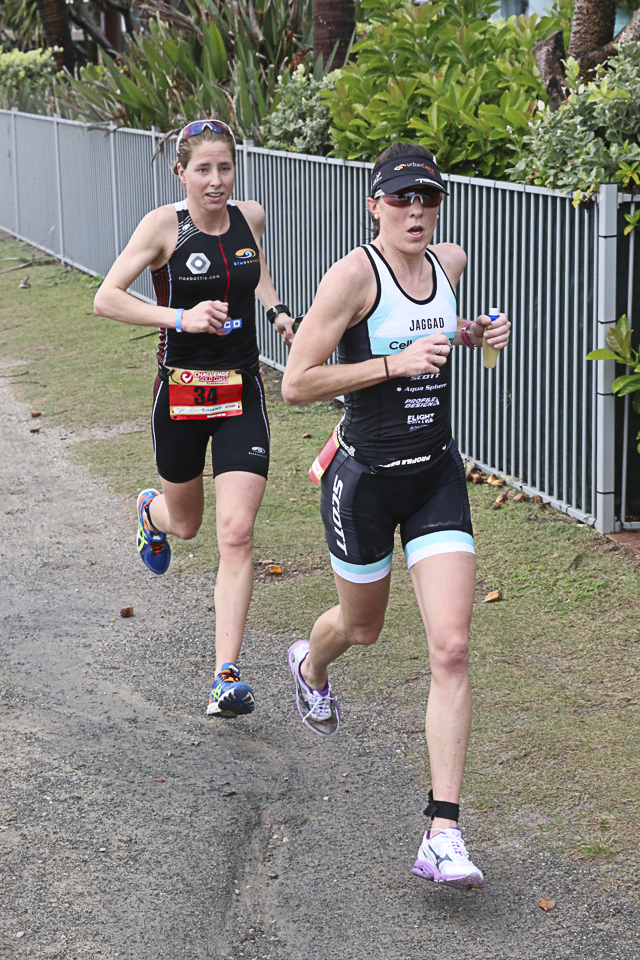 Watkinson did let Luxford get away on the bike as they showed caution in the wet and slippery conditions. It was clear the winner would be decided between these two as Marangon had slipped further back to be nearly four minutes behind.

Luxford and Watkinson ran shoulder to shoulder for most of the first lap of the run, neither giving an inch.

Madeline Oldfield had run herself into third over the fading Marangon with Renee Baker moving through the field and holding down fourth place.

On the final lap and closing stages Watkinson pulled ahead, Luxford was unable to respond.

It was Watkinson’s first professional win and she was overwhelmed after crossing the line.

"The support out there was great - it was my first international race as a pro so I didn't really know what to expect but I'm really happy to take the win. The chance to win the Bahrain Royal Package was real motivation on the run  - it will be an absolute dream come true to race there. I've seen the start list and it will be amazing to race along side all those athletes,” said Watkinson.

While disappointed with second Luxford was buoyed with her performance, her first race back since a bike crash back in May.

“I ran within myself today but my quads cramped,” said Luxford.

“It was a solid hit out and gives me a good indication of where I’m at ahead of world champs,” said Luxford.

Tineke Stewart ran herself onto the podium to claim third.

Both winners not only received a slice of the AUD$35,000 prize purse but a Royal Package to Challenge Bahrain on December 6. The package includes business class airfares, 5 star accommodation and personal driver.

In addition to the professional field 1,400 age group competitors also conquered the conditions and course to make their way to the finished line to create history, as the first to participate in what Pete Jacobs predicts will be the most iconic long course race in Queensland.