While the race for Rio is locked safely away for Chile’s two-time Olympic triathlete Barbara Riveros the journey is just heating up for Queensland Games hopeful Gillian Backhouse. 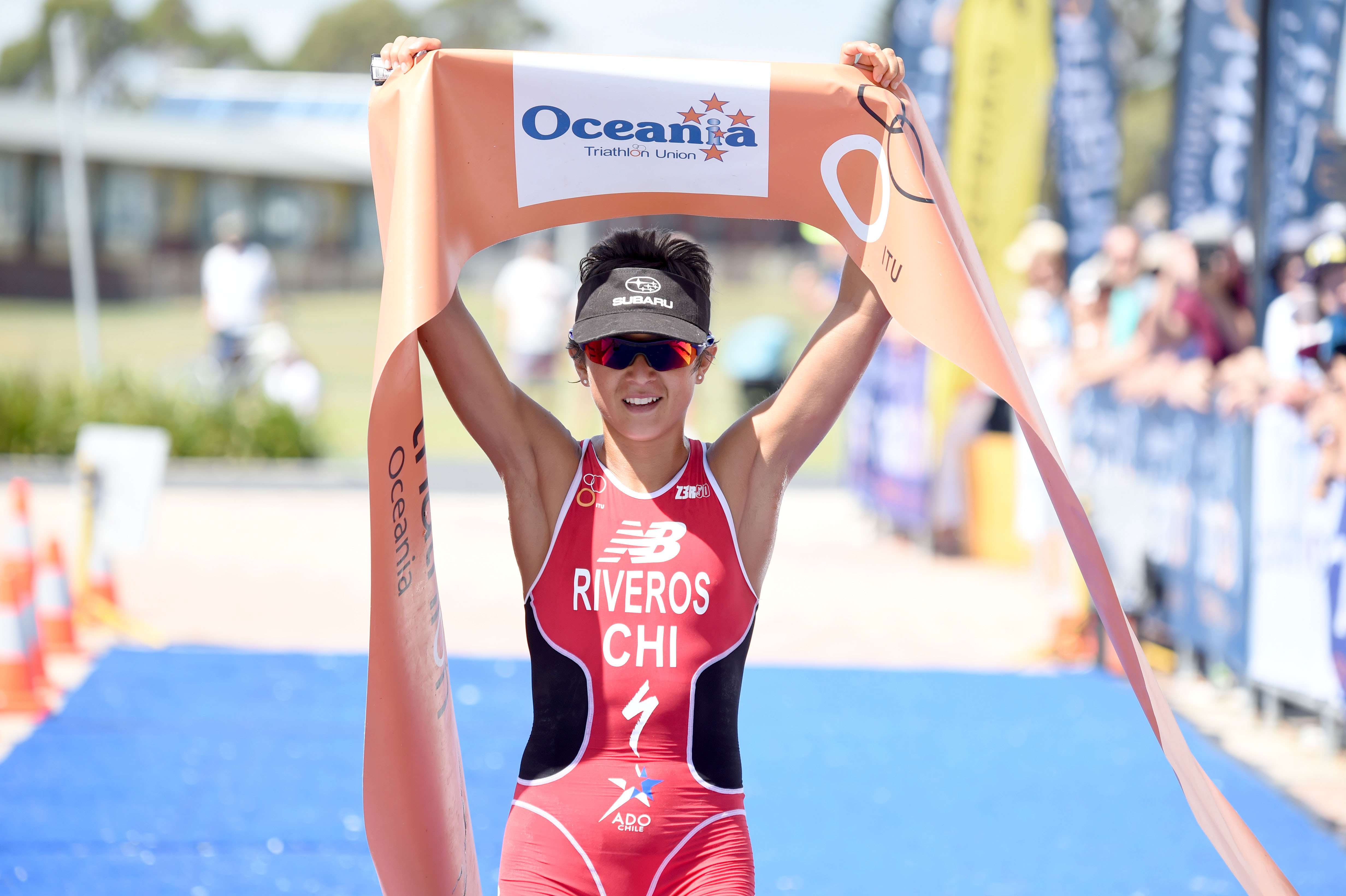 Riveros, the 28-year-old, adopted by Australia in her Wollongong training-base for much of her elite career, nailed her third Olympic team with a victory last year in the Pan American Championships.

And today in Devonport the likeable pint-sized South American admitted she was very happy to win the Oceania Cup, delighted to be on the team for Rio, but far from satisfied with “just being at the Games.”

Riveros cleared out on the run to leave Backhouse in second but with the Australian Standard Distance Championship and emerging star Emma Jeffcoat third and with the Under 23 title.

“I don’t want to just be a tourist in Rio I want to go there and get the kind of result that my coach (Jamie Turner) and I know I am capable of,” said Riveros.

“This is a good way to start my racing and I had heard so much about ‘the hill climb’ and I was left behind on the first lap and thought ‘wow’ I better catch up here or I will be left behind.”

Riveros did catch up but it took eight laps on the 40km bike course with another seven hill climbs, alongside noted swim-biker Backhouse as they set out to claim brave Sydney Northern Beaches youngster Jeffcoat, who led out of the 1.5km surf swim and powered away on the bike, showing great strength and tenacity. 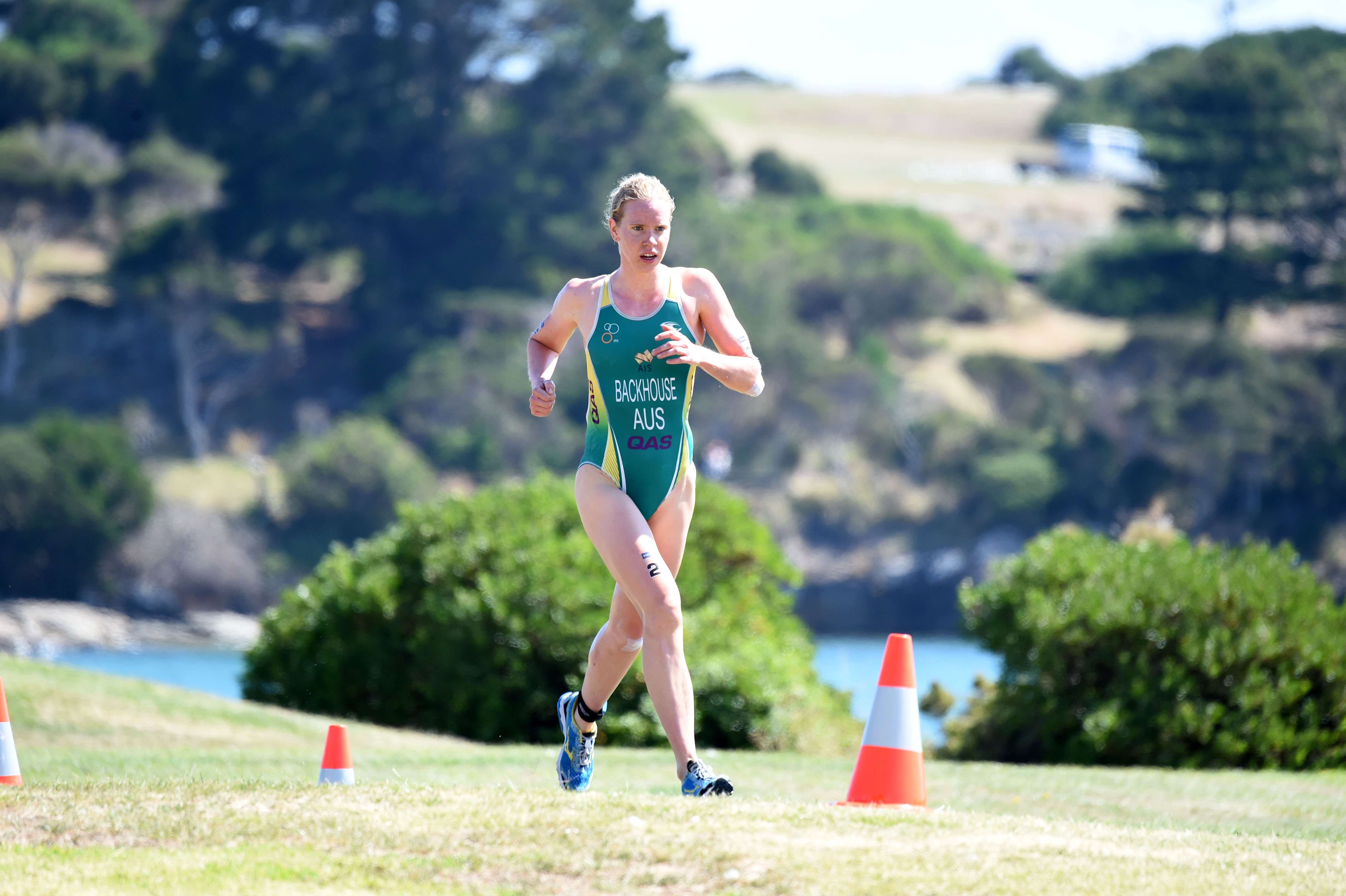 Backhouse admitted she had to be on her game and took inspiration from watching her QAS training partners Sophie Malowiecki, Brittany Dutton and the Leahy twins from Goondiwindi, Zoe and Elle go top four in yesterday’s Australian Junior Championship.

“I was buzzing all afternoon from watching the girls race. It gave me goose bumps, “ said Backhouse.

“We train in a very really supportive atmosphere (under QAS coaches Stephen Moss and Josh Whtie) where we are really able to push ourselves in training.”

And she knew what she was up against with Riveros but also putting the race into perspective for what lies ahead.

“I know she’s a gun runner but it was my first race of the year and I was determined just to do the best I could,” said Backhouse.

“I need the race practice in time to hit the start of the World Triathlon Series in two weeks in Abu Dhabi before the Gold Coast race which will act as a chance for automatic Rio selection.

“I will tackle the Gold Coast race like any other race. I know exactly what I have to do - just go out and execute that and I’ll be fine.”

But Backhouse admitted that she learns something from every race and today was no different.

“I haven’t raced a proper race since the World Championships in Chicago last September and you forget little things like just how quickly you have to do transition and how important it is to take the correct line in the swim which I didn’t do today.

“A few little things like that which I’ve learnt today that will help come next time.”

Jeffcoat, the latest Emma on the Australian triathlon scene, had a one-track mind in her race – lead the swim, powered on the bike and hung on in the run to be the first Under 23 girl home – to earn the automatic nomination for the Australian Team for this year’s ITU World Championships in Cozumel. 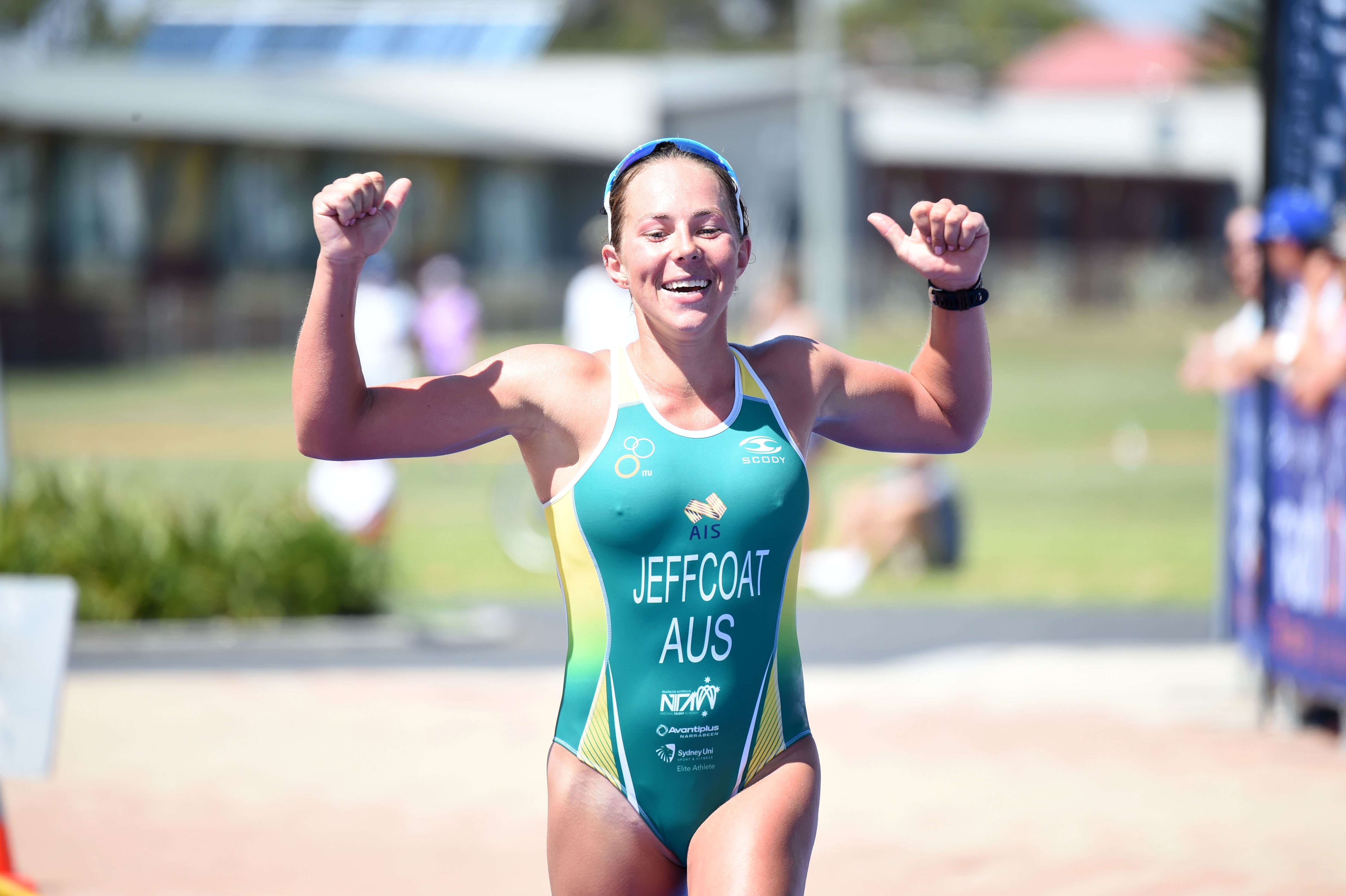 “You won’t be wiping this smile off my face for a while; this has been my main season goal, to make the Australian team for the World Championships,” said Jeffcoat.

“So to have that spot booked for the rest of the season is brilliant and takes the pressure off and means we can stick to our A plan.

“I have transferred from surf lifesaving and I give any girl credit; it’s definitely harder than it looks; it has taken me a good two years to work on my run; it takes a lot of persistence and determination.”

Collaroy’s Jeffcoat, a former Australian Surf Life Saving gold medallist in the 2km beach run for Dee Why is under the direction of High Performance Tri coach Delamotte at his Sutherland headquarters and also on the Sydney Northern Beaches at the Sydney Academy of Sport.

And her reaction to follow Emma Snowsill, Emma Moffatt and Emma Jackson as the next Emma to represent Australia in triathlon?

“My mum doesn’t really know that much (about sport) which is kind of good but she told me ‘if I’ve done one thing right at least I’ve given you the right name,” said Jeffcoat.

This 21-year-old Emma, a trainee nurse, will now prepare for her Mooloolaba World Cup debut on the Sunshine Coast next month.

Backhouse back on the bike for Devonport after criterium crash