The Rio 2016 Olympic Games will host the fifth edition of the triathlon competition at the Olympics. Here is your preview, stats-style.

173 – Seconds. The biggest deficit that any Gold medallist has had to make up from T2. Austria’s Kate Allen was this far behind the leader when she started the run in Athens, but surged ahead of Australia’s Loretta Harrop in the final few hundred metres to claim gold.

67 – Seconds. The biggest winning margin in Olympic history, recorded by Australia’s Emma Snowsill in the women’s triathlon at the Beijing 2008 Olympic Games.

57 – Athletes in the triathlon events in Rio will be making their Olympic Games debut. There will be 36 heading to their second Olympic Games, and 13 to their third. There are four headed to their fourth Olympics.

48 – National Olympic Committees that have been represented in the triathlon event at the Olympic Games so far. Rio will take that number to 54, as it marks the first time for Azerbaijan (Rostislav Pevtsov), Barbados (Jason Wilson), Israel (Ron Darmon), Jordan (Lawrence Fanous), Norway (Kristian Blummenfelt) and Puerto Rico (Manuel Huerta).

40 – The average time in seconds that the women’s eventual winner was behind in the swim. Skewed slightly by the times of Kate Allen (who finished the swim leg 121 seconds behind the leader) and Nicola Spirig (67 seconds behind), but it indicates that the race might not be over after the first leg.

30-39 – If you are looking for an omen as to who might podium at Copacabana, look to athletes with start numbers in the thirties. So far five gold medals have come from start numbers between 30 and 39. These includeEmma Snowsill (34), Brigitte McMahon (35), Kate Allen (39), Jan Frodeno (32) and Alistair Brownlee (30).

34 – Is the most successful start number so far. It was worn by Emma Snowsill (Gold in Beijing), Magali di Marco Messmer (Bronze in Sydney), and Susan Williams (Bronze in Athens). 27 has also been a successful number, with Bevan Docherty claiming both his medals, silver in Athens and bronze in Beijing, in that start number.

32 - The amount of ITU race wins from Great Britain’s Alistair Brownlee, from a total of 65 ITU race starts, or a winning record of 49%. In the World Triathlon Series, the London 2012 Olympic Champion’s race form is even better, 32 starts for 21 wins.

23 - Australia, Great Britain and United States have had 23 entries each in triathlon Olympic history and will each be sending six athletes each this time. No NOC has sent three men and three women to every Olympic Games.

21 - The age of Tyler Mislawchuck (CAN), the youngest man on the men’s start list. He’ll celebrate his 22nd birthday the day after the men’s race in Rio.

19 - The age of Cassandrea Beaugrand (FRA), the youngest triathlete in Rio.

13 – No athlete will wear 13 at the Olympics, as it is purposely excluded in both the men’s and women’s races, as in all other ITU races.  Therefore, the final start number assigned in the 55-strong field is 56.

12 – Different NOCs have won medals in the triathlon event at the Olympic Games. Seven different countries have won gold, with Switzerland the only country to have taken two Gold medals (Brigitte McMahon in Sydney and Nicola Spirig in London).

5 – The number of medals won by Australia in triathlon events at the Olympic Games. So far, these have all been won by women – with Australian women claiming one medal in Sydney, Athens and London, and two in Beijing.

4 - National Olympic Committees have claimed multiple medals in the same race, Switzerland’s Brigitte McMahon and Magali di Marco Messmer in Sydney, New Zealand’s Hamish Carter and Bevan Docherty in Athens, Australia’s Emma Snowsill and Emma Moffatt in Beijing, and Great Britain’s brothers Alistair Brownleeand Jonathan Brownlee in London. So far though Carter and Docherty are the only pair of those to collect gold and silver. All of the others have finished in gold and bronze.

2 – Australia and New Zealand are the only two NOCs to have claimed an Olympic medal of every colour.

2 - The number of ITU World Champions in the men’s field, Alistair Brownlee (2009, 2011) and Jonathan Brownlee(2012). Since 2008, Javier Gomez is the only other man to have collected a World Championship, he’s won five of them, but the Spainard won’t be in RIo after a last-minute injury.

1 – The number of test event winners that have gone on to win Olympic Gold. Before London 2012 Olympics, this number was zero. But Alistair Brownlee bucked the trend. He won the 2011 World Triathlon Series event in London, with brother Jonathan Brownlee claiming bronze. Javier Gomez finished fourth in the test event, and went on to claim silver. In the previous three Olympic test events for Sydney, Athens and Beijing – the winner of the test event had never won the Olympic gold. But in the previous two Olympic Games – the bronze medallist from the men’s test event had gone on to win bronze in the Olympic race. Sven Riederer (SUI) in Athens andBevan Docherty (NZL) in Beijing. Other test event medallists who have gone on to medal in the Olympic version include Vanessa Fernandes (POR) and Emma Snowsill (AUS). Fernandes beat Snowsill in the Beijing test event, before Snowsill turned the tables at the Games.  Also the entire women’s podium from Sydney 2000 had medalled in the test event earlier that year: Brigitte McMahon (SUI), Michellie Jones (AUS), and Magali Di Marco Messmer (SUI), just in a different order. The 2015 Rio test event saw Gwen Jorgensen (USA) win ahead of Non Stanford (GBR) and Vicky Holland (GBR), and Javier Gomez finish ahead of Vincent Luis (FRA) and Richard Murray (RSA).

1 - Mother who has won an Olympic Gold medal in triathlon, Switzerland’s Brigitte McMahon had a three-year-old son when she won gold in Sydney. Nicola Spirig could be the second mother to achieve that, she had son Yanis in 2013. She would also be only the third woman in history to retain an Olympic Gold medal after having a child.

0 – seconds. There was no time difference between Switzerland’s Nicola Spirig and Sweden’s Lisa Norden in the women’s race at the London Games. Spirig was awarded the gold medal by photo finish. 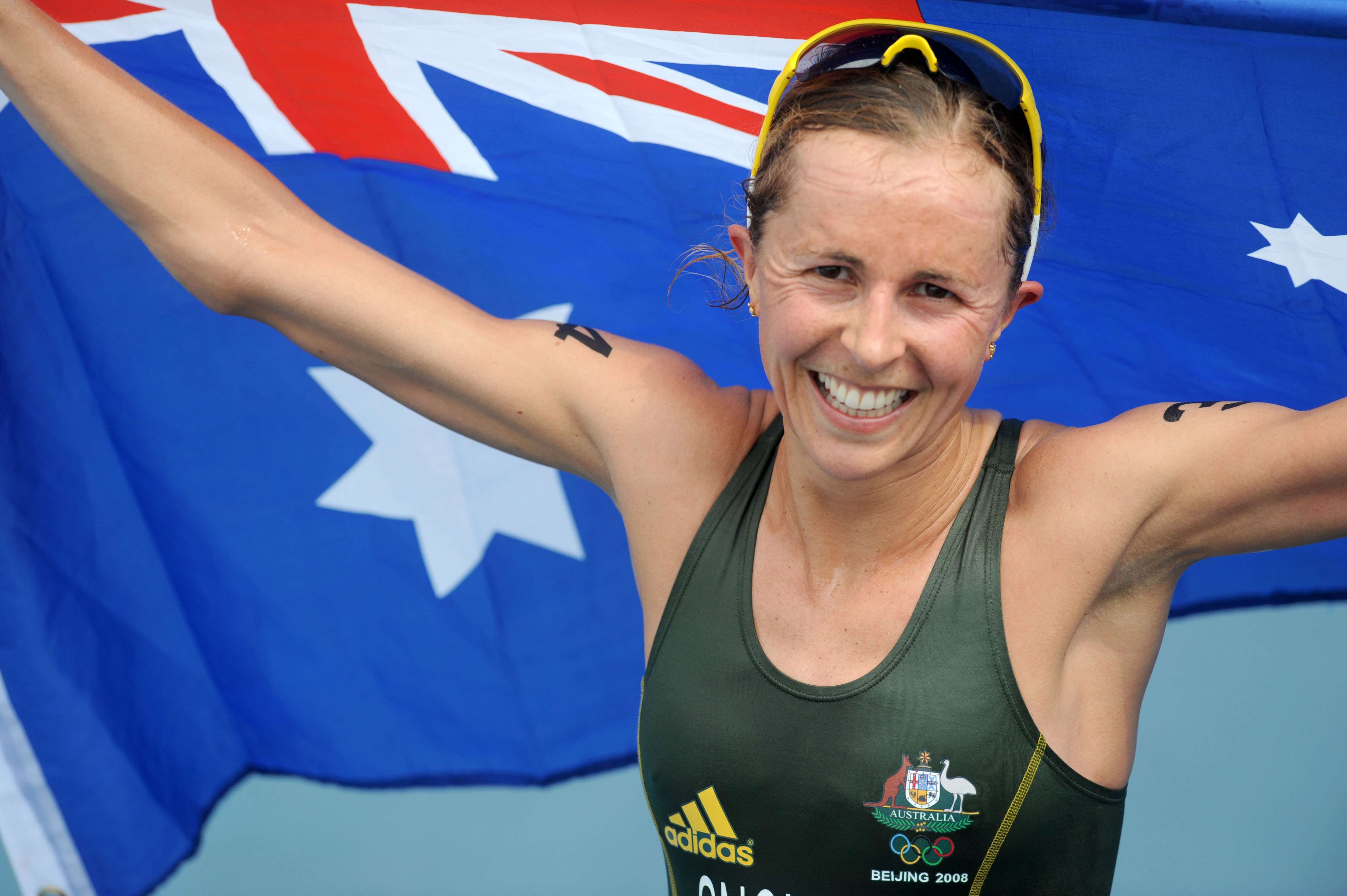