A Very Special 'Meet the TO': Margaret George

This week we have been looking at the vital role played by our Technical Officials in ensuring the safety and integrity of our awesome sport. We would like to put a spotlight on the very special Margaret George, the NSW nominee for the Rob George Award in 2019/20. Margaret has demonstrated longstanding commitment to triathlon, and to the development of Technical Officials and events in the state. We are excited to share her story as a TO, and scroll down for an excerpt of her nomination for the award. 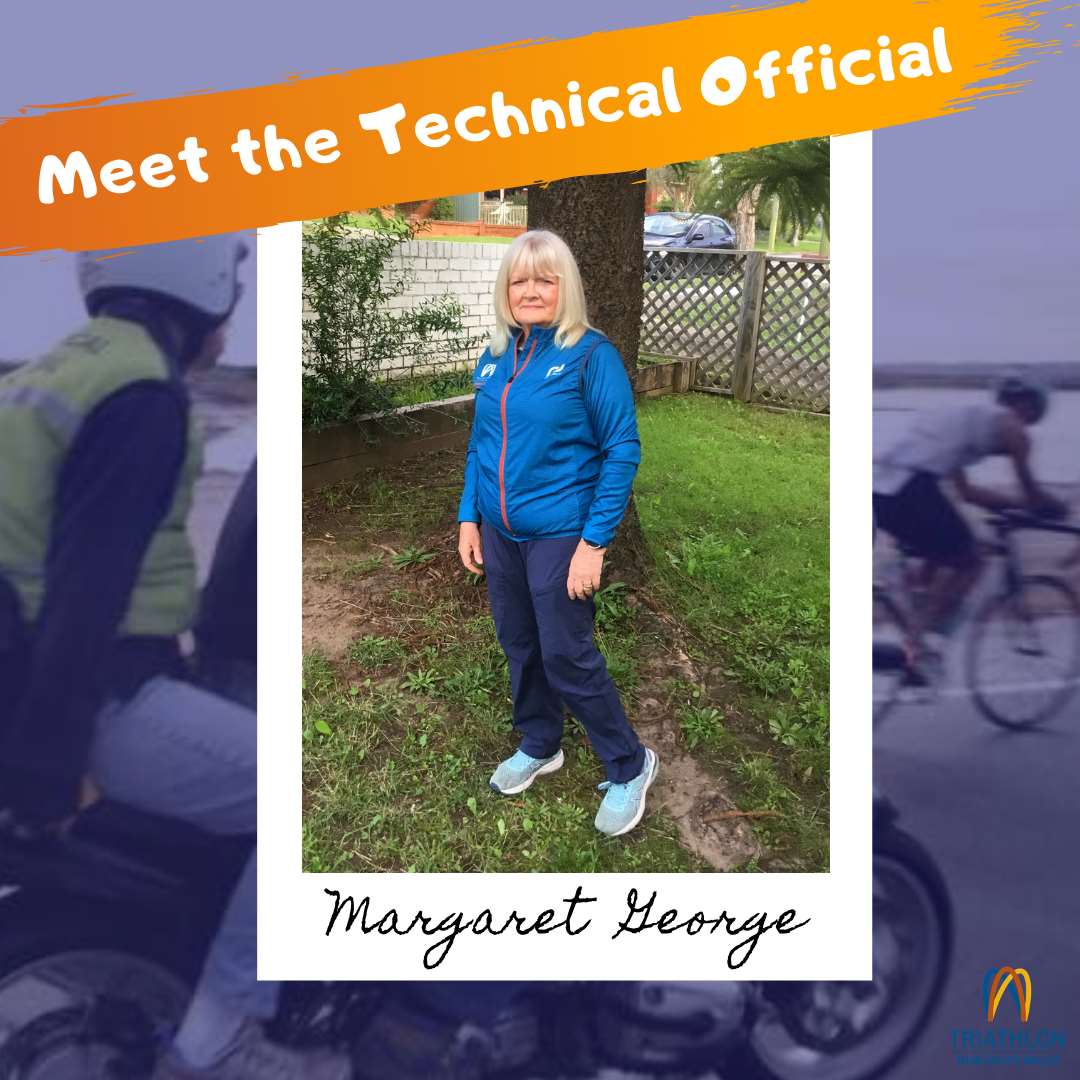 How long have you been a technical official?

Why did you choose to become a technical official?

My husband was a TO & I used to go to country races with him & sometimes had to help out.

He figured if I did the Level 1 Course, Tri NSW would get 2 TOs for the price of 1.

What’s the best part about being a TO?

Definitely interacting with the athletes, showing them that TOs are really nice people that we are there on the day to keep the races safe & fair.

Do you have a favourite event, and why?

Difficult to choose just one. Definitely the Nepean Tri both because it is the longest continually run Tri in Australia & it has always been run by my club, Panthers Tri Club. But you have to love Ironman Port Macquarie & Ironman Busselton because they are the ultimate challenge in our sport.

What’s the funniest thing you have seen on the field of play?

Oh gosh, so many! At the BRW Corporate Tri a number of years ago, an athlete ran toward the mount line pushing his bike on its back wheel only. As he bounced his bike off the kerb his front wheel fell off & went rolling down the hill creating havoc among cyclists already on the course. It was impossible not to laugh.

At another race an athlete completed a 20km cycle leg wearing a borrowed motorcycle helmet as he had left his helmet at home & couldn’t get another.

Do you have any aspirations for your future as a technical official?

I would like to complete an ATO Level course to broaden my knowledge & help me in training new Technical Officials.

Will you be officiating at the Club Championships on 19th September?

What would you say to anyone thinking of becoming a technical official?

Do it! It is very rewarding to be able to give back. You get to work with a great group of people & as an athlete you get to know the rules & you may even find out why you were booked at that race a while back!

The Rob George Award honours Margaret's late husband, Rob George, who was a valued long term member of the Triathlon Australia technical program, having joined in 2004. The award recognises the valuable contributions made to the Technical Program across Australia by individual Technical Officials. Nominees must espouse the values of Rob George, including being well-organised and dependable, fair, positive, a team player, a problem solver and one who demonstrates empathy & guidance to others. In 2019/20, Triathlon NSW Technical & Events Manager, David Williams, nominated Margaret as the NSW representative for the award, with the following:

Margaret George joined the Triathlon Australia Technical Program on 2 May, 2009 as an accredited NSW technical official. She has remained in the Program since that date.

On 27 October 2013 Margaret’s advanced technical skills were formally recognised when she was elevated to the position of Level 2 official.

In 2013/14 season Margaret became an active member of the NSW Technical Official Mentoring Program, both as a mentee and as a mentor to two junior officials. She has subsequently taken a leadership role in the Triathlon NSW Officiating Mentor Program and in 2018 she gained formal training in “training the mentor” via the NSW Office of Sport education program.

In 2016/17 Margaret assisted the Sydney Filipino community with the establishment of the Filoz Triathlon Club, which has continued to grow each season. Margaret regularly donates her time to provide free technical official services and advice at the club’s regular events.

In 2017/18 Margaret further increased her commitment to the Triathlon Australia Technical Program when she was appointed by the TNSW Board to the TNSW Technical Committee. She has a high attendance rate to the monthly committee meetings and she regularly makes valuable contributions to each meeting. Also in 2017/18 Margaret received a reward/recognition citation from Triathlon Australia, recognising her contribution to the sport.

In recent seasons, Margaret’s leadership skills have been recognised to the extent that in her last seventeen events as a technical official, she has been appointed to either a Technical Delegate or a Race Referee role. This is a remarkable achievement and a testament to her standing in the officiating program and her respect within the triathlon community.

In 2019 Margaret increased her commitment to the mentoring program by volunteering to manage the whole NSW program, in addition to being a formal mentor to five junior officials.

Margaret has demonstrated a high personal commitment to the Technical Program at a local and interstate level, and encourages the growth of triathlon at a grassroots level. She is an excellent mentor for other TO's in the sport and plays an active role with race directors to ensure safety and fairness. We thank Margaret for her continued service to triathlon in NSW, and we believe she is well deserving of the nomination for this award.

For more info on becoming a Technical Official (for free!), click here.